BLDP appeared in yesterday’s extended watchlist, but it wasn’t even close to its first appearance in our reports. We constantly receive reminders to follow our daily extended watchlist plays closely, in the form of big increases and chances to profit. BLDP is a shining example of this concept, a stock that we’ve tracked since March of last year. Shortly following that time, we would see a low of .76, and the stock has never looked back.

Over the past year BLDP gradually rose up until recently it began to gain ground much quicker. At the start of 2014, the stock was trading in the 1.55-range. Since then it has taken off, culminating in a new high of 7.38 yesterday. Our total possible gain on BLDP yesterday was 31% however, from our original alert low on this stock we’ve seen a huge increase of 871%

We kicked off a new trading week in grand fashion by tagging OSLH in yesterday’s morning report. The company had released a PR outlining its entry into the legal cannabis sector, and the stock would go on to have a great session.

After opening at .0899, the stock touched a low of .089 before running up to .19 in the afternoon. That move marked an intraday gain opportunity of up to 113% on roughly 28x the 3-month average volume. Congratulations to anyone who was able to take advantage of our timely alert!

Leading up to yesterday morning’s report including old favorite, PLUG, was already one of our all-time standouts. The stock had made an unreal 7129% gain from our first ever mention (@.1155) just over a year ago, to Friday’s top mark at 8.35.

Seeing a low of 8.57 before bulling its way to a new high of 11.41 yesterday, PLUG accounted for an intraday gain of 33%

The overall increase from our first-ever alert would be pushed even higher, to a mind-numbing 9778%

FITX popped up on our news ticker this morning with an announcement we felt was worthy of passing along. We’ve been following along as the company builds its state of the art cannabis grow facility in Ontario, CA, and this morning we received an update:

We had to include GLCO as well, who released a PR today that ties it to another one of our marijuana success stories, EAPH (Easton Pharmaceuticals,Inc.).

Here’s another stock with fresh news that we’re going to monitoring this morning:

Perhaps some of you may have already seen the stories that have been circulating about the current state of medical marijuana in Canada. This is a very complex issue that we are going to try to briefly break down to brass tacks. Essentially, beginning on the 1st of April, we are looking at the end of Canada’s MMAR (Medical Marijuana Access Regulations program, introduced more than a decade ago to allow Canadians with a need for cannabis to obtain a license to grow their own, or purchase it through one of the many dispensaries now operating across the nation.

The new rules will relegate supply duty to one of Health Canada’s eight commercial growers, or to one of roughly a dozen new growers that the Canadian health organization expects to lisnce when the new program takes effect. The move certainly has its opposition in the medical community and private sector, but barring some major development (such as a ruling by the Supreme Court of B.C., where the government is being sued under the assertion that the new laws are unconstitutional), all growing will fall to just a handful of state-sanctioned operations. What excites us most about the potential behind this development, is the direct involvement of some of the companies that we’ve been successfully tracking for quite some time which have formed a series of strategic partnerships.

Among the expected participants is one of our recent favorites in the sector, Creative Edge Nutrition, Inc (FITX). We’re eagerly awaiting further news regarding the status of its build on a 53,000sq. ft. grow facility in Lakeshore, Ontario, where it will become the largest such facility in all of Canada.

This also implicates another of our top pot performers, GrowLife, Inc. (PHOT) which has joined forces with FITX’s CEN Biotech subsidiary in this venture. The operation is expected to yield over a million pounds of marijuana annually to be distributed, with government approval, to the nearly 40,000 medical marijuana patients in Canada, a consumer-base that is expected to grow exponentially over the next few years.

Also in on the deal is ENDEXX Corp. (EDXC), whose “M3Hub Seed to Sale Tracking Platform” will be implemented to help track and maintain compliance for the facility’s huge crop output.

Other pot stocks we’ve covered stand to gain from Health Canada’s new regulations as well. Many of you will recall the huge gains we’ve already seen from Easton Pharmaceuticals, Inc. EAPH. Earlier this month, we received word that the company formed an alliance with a private B.C-based firm which has obtained government approval for its own grow operation.

All in all, we see the upcoming changes as even more reason why we can’t let the cannabis sector slip off of our radars. The new developments have been rolling in at a rapid rate, something we expect to continue indefinitely. Be sure to stay tuned as we keep you up to date on all of the exciting happenings!

Fortitude Group, Inc. FRTD – We observed nice intraday activity from FRTD on Friday, as we had for most of the week up to that point. On the strength of a PR outlining the company’s new medical marijuana product “MariMist” designed for cancer patients, the stock made an intraday run of 43% as it spiked from a low of .0181 to touch a new high of .0259. From our initial alert low (Tuesday) at .0081, Friday’s high represents an overall move of 220%

Triton Distribution Systems, Inc. TTDZ – TTDZ has undergone a recent consolidation period after delivering us some sizable gains. Today we see news regarding the absorption of Triton into Green Cures, a story that we’re going to want to follow closely, as it could be just the catalyst we’re looking for to see TTDZ bounce back and potentially afford us a rebound opportunity:

Advanced Cannabis Solutions, Inc. CANN – Our first alert on CANN came on January 8th, at which point we observed a low of 6.31. What we’ve seen since then has been a rousing success-story, as the stock has gone on to hit a new high of 35.88. That’s a monstrous move of 469%, an unbelievable figure considering the price range of this stock.

Also, we have a couple of new marijuana stocks to add to our ever-expanding watchlist:

We originally caught CETV on a Form-4 scan back in May of last year.  We were excited to see the buyer listed on the form as Time Warner. At the time, the stock was trading at 2.67. By late October, it hit a high of 6.60. After consolidating gradually to find support near our original alert price, prompting us to include it on Friday’s extended watchlist. After dipping to a morning low of 3.30, the stock would run as high as 5.17. marking an intraday move of  57%

PSID has been responding extremely well since we re-commenced coverage on the stock on February 18th. At the time we observed a low of .0572. On Thursday, after several consecutive sessions of positive movement, the stock reached a high of .125, good for an overall move of 119%

We prepared a video of the PSID chart, pointing out current levels of support and resistance:

Dewmar International BMC, Inc. DEWM
–
We brought DEWM to folks’ attention in yesterday’s morning report, and as you can see from the following intraday chart, the stock did offer up gain opportunities despite ultimately closing down on the day. After opening at .0054, the stock promptly ran 20% to as high .0065. Following a consolidation to a low of .0037 shortly after 2PM, the stock made another bounce to .0046, a 24% move. 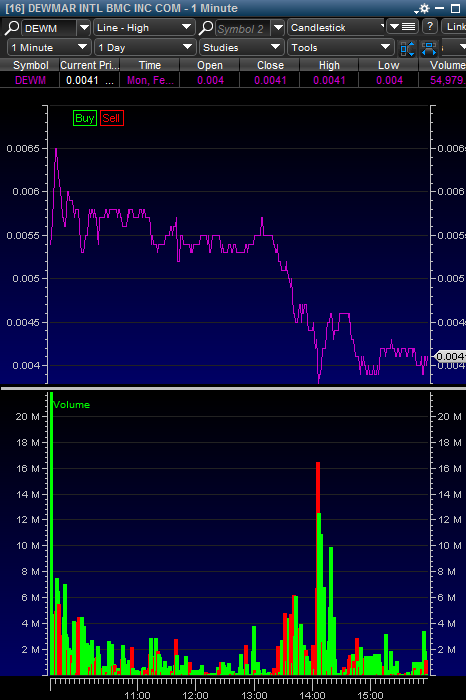 We want to keep this one on our radar moving forward, after seeing a PR released this morning alluding to a partnership with Hemp, Inc.(HEMP) much like the one that catapulted REVI to stellar gains last week.

Several of our tracked cannabis plays started off the week by pulling back from recent highs, but others still made headway, including the following:

We continued to talk about FITX in yesterday’s newsletter, and the stock followed up with a nice performance. After touching a low of .084, the stock quickly ran as high as .112, affording opportunistic traders a chance at gains of up to 33%

We’ll continue to monitor the situation as the attention the company is getting is becoming more wide-spread:

LATF made a nice intraday move as well, trading in a range from .007 to .01. That marks a gain of 43% following yesterday’s PR:

AFAI is a new cannabis-related play that we’d like to include this morning. It’s another stock with untraded-upon news to consider:

NYBD is a play we’d like to radar this morning, following an impressive display yesterday as it gained a head of steam. The stock ended up with a gain of 50% over the previous session’s close, and did so on extreme high volume to the tune of more than 10x its 3-month running average.

We’ll be watching closely this morning to determine if yesterday’s momentum will carry over. NYBD has a recent history of rapid gains, as it ran from subpenny to more than .016 this past fall.