Since 2012, we’ve talked up the business side of marijuana, and with all that has happened in the space since then, we have not been disappointed.

Our long-term subscribers recall that HEMP was among the first pot plays that we ever discussed, with its appearances in our reports dating all the way back to 10/16/12. If you take a look at our HEMP archive, you will find pages upon pages of coverage spanning from then up to the present, and it has been one heck of a ride.

Flash forward to this past December, when HEMP had come all the way down under a penny (as low as .0085). Even though we knew the cannabis sector was bound to be huge, nothing could have prepared us for what was to come. As you all know, pot stocks across the board absolutely exploded around the New Year, and it sent HEMP on a stratospheric run which culminated in a high of .34 (Feb 5th.). The overall move we saw out of this play was a staggering 3900% between 12/19/13-02/05/14.

The following chart shows both that huge run, and current conditions that have us standing at attention. The PPS is holding support at a key level of previous resistance, and the MACD indicator is priming up for a bullish move: 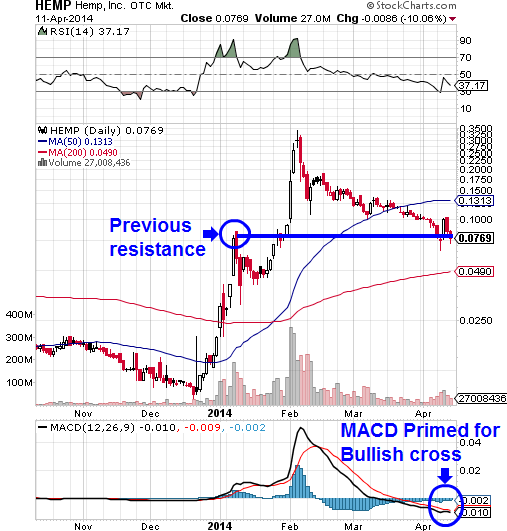 Also turning our focus to HEMP today is the fact that just this morning, the company has released record-setting quarterly financials:

“Total sales for first quarter 2014 represent an increase of 1,181% over the same quarter last year and a marked 656% increase over the previous quarter announced just days ago.”  >> Go To PR

Despite the general pullbacks throughout pot sector last week (perhaps largely related to the SEC’s temporary halt of PHOT) TTDZ managed to close out the week on a high note. On Friday, the stock made a nice intraday move from .024 to .0419, giving folks the chance at up to 75% in gains.

The last time we touched upon this favorite of ours, was last Monday, when we were congratulating ourselves for having seen a new high (.04) from TTDZ. The next day, the stock pushed the envelope again, setting yet another high mark at .049. From our first alert on January 30th (at a price of .0012), that is equal to an increase of 3983%

PBR and its options chain has been a veritable goldmine for us in recent weeks, and last week was no exception. We even saw a partial fill of the gap on the chart that we have been eyeing since beginning coverage on this play.

We were heavily interested in the $13.50 and $14 Weekly Calls for intra-week flip opportunities, and there were indeed many chances to profit. 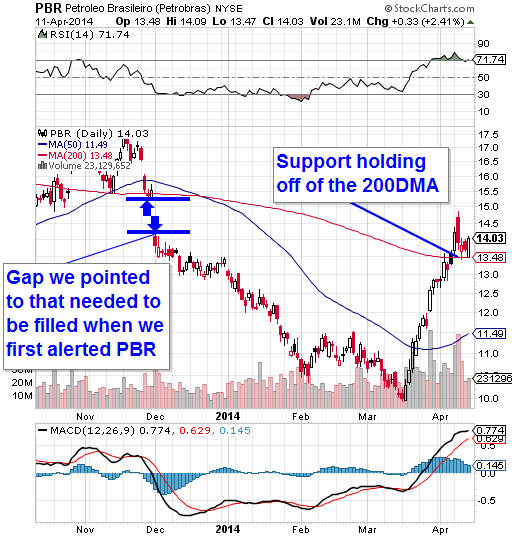 The longer-term targets we’ve been tracking are the May $12 and the April $14’s, which, after already providing huge gains, still hold our interest.

Fortitude Group, Inc. FRTD
–
As we embark on another week of trading action, we need to first post an update on the continued success of one of our recent picks, FRTD.

We brought our readers a prime opportunity with this cannabis play when we put it on our radar the morning of February 25th. That day, the stock would see a low of .0081 and it has been one heck of a ride ever since.

This is one marijuana-related stock that has actual substance, affirmed by a recent distribution agreement the company struck with herb vaporizer manufacturer ‘VaporVites’, that could see Fortitude processing orders from up to 80 Colorado marijuana dispensaries within the next quarter.

That mid-week news helped fan the flames that would push FRTD to a new high on Friday, as it touched .0784. That marked a whopping 868% from the low we observed roughly five weeks ago.

TTDZ is yet another pot stock that we put on watch when it was trading sub-penny, and as a result of the investment community’s rising level of interest in everything cannabis, has burst through the penny barrier to achieve impressive new highs.

From a low of .0012 on 01/30, we’ve tracked TTDZ all the way to it’s new four-cent high on Friday; an overall increase of 3233% TTDZ has become a prime example of our continued interest in the sector.

While it’s true that the fevered hype that we saw at the beginning of 2014 surrounding the marijuana sector has normalized quite a bit, it is still one of the most high-potential market spaces. We are only just witnessing the beginnings of extreme change in this arena. It has already spread far beyond Colorado, with the Obama administration gradually softening its position on pot.

Atty. General Eric Holder, at a recent appropriations committee hearing, even said: “We’d be more than glad to work with Congress if there is a desire to look at and reexamine how the drug is scheduled”

We’ve already reaped vast rewards off of this fledgling space, with total gains numbering in the tens of thousands over the past few months, and we don’t predict an end to it any time soon, so be sure to stay with us!

HEMP, another of our favorite cannabis plays (Followed it from subpenny up to .34 earlier this year) came with dividend news this morning that we wanted to pass along:

We’ve been tracking PBR heavily for the options trading chances it has provided us. Currently we’re radaring the May $12 Calls and the June $14 calls for longer-term trades, and are sticking with the $13 and $13.50 weekly calls for more rapid flip opportunities.

Legacy Platinum Group, Inc. LWSP
–
We’d like to update everyone on the status of one of this week’s successful picks. We first brought LWSP to our readers on Tuesdaymorning, at which time the stock opened up at .187.LWSP spent the next two sessions on the upswing, culminating in yesterday’s push to  a new high of .33. That marks a three-day overall increase of 76%

Moving forward, we’ll need to see support hold at or above .21 in order for us to remain interested in LWSP.

Remember, per Tuesday’s PR, we’re waiting for an upcoming name and symbol change, expected to begin on May 16th.  We’ll also be on the lookout for further updates from the company on its new direction in the e-cigarette and portable vaporizer market.

For some of our newer readers, allow us to do a quick recap of how TTDZ has become one of 2014’s superstar picks for us. Beginning with our first alert on the stock on January 30th, we observed a low of .0012. and it has been pushing its upper boundaries ever since.

By the time mid-March rolled around, the stock had punched above .015, gaining well over 1200% from our first call, but the party was just getting started.

Flash forward to the present, and TTDZ has pressed its way all the way to an impressive high of .0385. Which means that in less than two months, we’ve seen a total increase of 3108% out of TTDZ.

This is another play that recently transitioned into the cannabis sector that has applied for a name and symbol change, and we expect to have an update on that within the next few weeks.

After picking up on PBR exactly two weeks ago today, we’ve seen some impressive trading action in that short time, especially with regard to the options chain.

Besides coming across this stock shortly after it hit all-time lows, and witnessing the start of one heck of a recovery, we also received news this week of PBR’s boosted production numbers from February, which were significantly higher than those of previous months.

Today we’ll be looking at the $13 and $13.50 Weekly Calls for possible intraday flip-opportunities. For those without the ability to stay glued to your screens all day, for longer-term possibilities, we’ve noted our interest in the May $12 Calls and the April $14 Calls.

In the event that PBR fails to hold support at or above the 13-dollar mark, we would have to reassess our opinions.