Skip to content
April 20th is here, and it marks a symbolic day for the legal cannabis sector. Our regular readers know that we’ve been following this relatively new market space since its inception. Public opinion on marijuana reform has shifted drastically over the past few years, and the signs are everywhere.Mainstream media has long since jumped on the pot bandwagon, airing numerous specials on the subject, like CNN with Dr. Sanjay Gupta’s “Weed” series, the third installment of which aired last night.

It is also likely that the cannabis issue will be thrust even further into the spotlight as it has the potential to take a significant role in the 2016 presidential elections.

We’ll be sure to follow along as we’ve been doing, all the while keeping our eyes open for potential plays in the space. We’ve got a couple popping up on the radar this morning.

We’re taking notice of EDXC, whose recently acquired business has been presenting at the High Times Cannabis Cup in Denver which was in full swing over the weekend, and runs through the end of today.

The stock is coming off of a recent bottom and has been holding above its 50DMA since the end of March when the company’s acquisition of CBD Health Solutions was announced.

We’ll have this one on watch as the chart and the company’s activities both seem to have potential.

CAVE CREEK, AZ–(Marketwired – Apr 20, 2015) – Endexx Corporation’s (OTC PINK: EDXC) newly acquired subsidiary CBD Health Solutions LLC., has a booth in tent S4 at the annual Cannabis Cup in Denver, CO, through April 20th. Early reports are showing excellent reviews of the sample products and sales have been generated. The CBD Health Solutions’ team has been canvassing multiple markets over the past 90 days and sales contracts are growing on a weekly basis. >> FULL PR

FWDG is another cannabis-related play that caught our eye this morning.

The company released a PR announcing an upcoming share dividend (Link below); since it isn’t uncommon to see stocks make a run into dividend dates, we’re going to monitor FWDG in the time between now and April 30th.

Chartwise, we’d like to see the stock get back above the 50DMA (.004). There’s a gap to the downside between .0024-.0028, so the possibility that it come come down to fill that gap before we see a rebound is certainly possible. 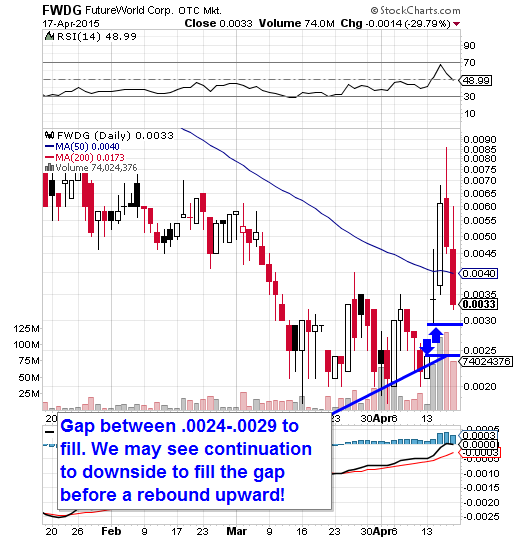 Easton Pharmaceuticals, Inc. EAPHEAPH is a play that we’ve been familiar with in the past; we’ve witnessed it produce huge gains on multiple occasions including a massive 1848% run from .0041-.0799 back in January-February 2014.

Then again from December ’14 to January of this year, the stock ran big in a range from .006-.0353, yielding potential gains in the neighborhood of 485%

The company released some very exciting news this morning pertaining to the purchase of a recreational marijuana facility in Colorado, so we’ll want to keep a close eye on this play as well into the foreseeable future. 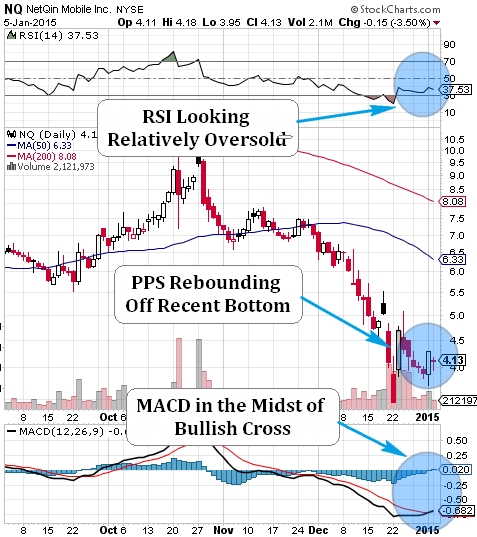 Last year at this time, we were in the midst of one of the most exciting times for an individual sector that we’ve ever witnessed. You’ll recall that the 2014 New Year brought the beginning of the first legal recreational marijuana sales in Colorado, and as a result the interest in cannabis and related stocks went absolutely through the roof. The months-long free-for-all was punctuated by dozens of ‘pot plays’ making astronomical gains, and it went down in the books as one of the most exciting mega-trends we’ve ever lived through.

While we don’t expect to see anything of that hype-fueled magnitude this year, we did notice a significant rise in activity in several of the marijuana stocks that we’ve tracked all throughout 2014 ramping up at the end of last week, so we thought this morning would be a good time to call some attention back to the legal/medical cannabis arena.

Friday’s list of gainers read like a symbol-for-symbol recap of our pot stock watchlist. Among those, the most impressive were ones that we are used to seeing make incredible moves:

*If you’d like to inspect our history with each stock, you can check the archives by typing bluehorseshoestocks.com/tag/____  and replacing the blank space with whichever symbol you’d like to pull up. It will furnish you with a chronological listing of each article that we posted on a given stock. (Note that this method can be used for any symbol we’ve ever covered, making us 100% transparent- just another reason why we feel our newsletter is the best around)

We will continue to make the monitoring of the cannabis sector a high priority for us as we settle into the New Year. More and more initiatives are being voted on all the time, and as we’ve been saying since 2012, the legalization of marijuana throughout the United States is going to play out like a domino effect. With measures having passed already in a handful of states, and several more slated to address  various degrees of the issue on impending ballots, the landscape of the industry should be expected to change and grow dramatically into the foreseeable future. Like always, we’ll be ready to capitalize on that growth as it happens.

We also want to do a quick follow-up on WATT, a stock that we initially tagged on Wednesday Dec. 24th at a low of 8.40 and the stock has been on an overall uptrend in the five sessions since that time.

On Friday the stock managed to close in the 11.30’s and in the premarket today, we have seen trades go off as high as 12.65; that marks an increase over our observed low totaling 51%, so big congratulations are in order for anyone that has been tracking this play along with us.

There’s also some news out today about an agreement with an established electronics company that could help WATT speed up its wireless charging solution’s path to market. That’s a story we will definitely need to monitor moving forward: