We have yet to talk about TWTR in 2017, namely because the stock has been in an overall downtrend over nearly that whole span. However, in recent weeks, it found a bottom and slowly has begun stair-stepping its way to a recovery. That process is getting a kick in the pants this morning with a significant morning gap up on the heels of Twitter’s earnings. The company posted losses, though not as big as expected, while also reporting an increase in users.

We’re going to see about possibly using the commotion to our advantage with a range of options ideas. Provided TWTR can maintain support at or above its 50DMA (15.19) on any pullbacks, we’re going to be interested in tracking the activity in the TWTR Weekly $15-16 Calls, on which we’ll be looking for a classic dip-and-rip pattern. If properly timed, it could spell some big gains in those contracts.

We want to put APRI on our radars today as a potential bottom-bouncer. At the beginning of the year, from a level comparable to current prices, the stock ran into the mid-$3 range. Now, after a long period of getting beat back nearly to its annual low, it is showing signs of a rebound that we’d like to monitor on the chance that it turns into a full-scale reversal.

You can see just what we mean on the snapshot below. The RSI is indicating that APRI is about to enter extreme oversold territory, while the MACD is just beginning to curl upward and show some convergence. We wouldn’t be surprised to a see cross in the days ahead.

Even just a run back to the 200DMA from here would be a move of almost 100% so we’ll definitely want to keep an eye peeled. 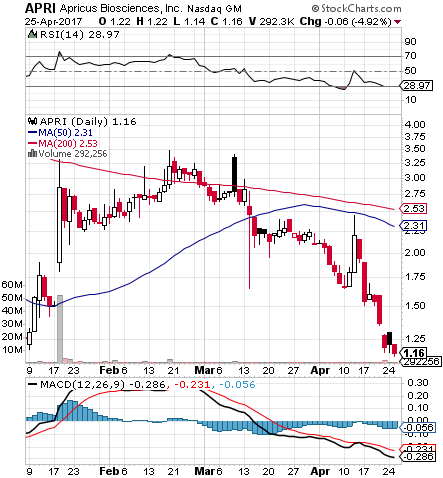 We’ve been saying how hot the super-subpenny market has been recently, and the trend has been persisting now for quite some time.  We initially slated DRNK for observation in Monday’s premarket report, after which we saw a soild 70% pop from a low of .0003. We stated as much in yesterday’s report, mentioning that we’d certainly want to continue to pay attention, based on a number of factors.

The stock did manage to record a new high for us for the second straight day, making an intraday move of 50% from .0004-.0006, and extending our two-session observed range to a nice, round 100%