To kick things off this week, we are first going to highlight the fantastic performance of the options targets we selected in the Virgin Galactic chain in Thursday morning’s premarket report. We signaled the SPCE Weekly $18-19 Calls, and while we had already witnessed multibag runs, all three sets in our designated range pushed the envelope on Friday.

The following ranges are two-session gains from Thuirsday’s low to their new Friday highs, and the total possible profits that were on the table over that span:

We had also added the SPCE Weekly $22-22.50 Calls to our watchlist on Friday morning, and those plays also produced significant gain opportunities on the day, which were as follows:

It was less than two weeks ago on the morning of the 8th, that we highlighted our coverage of NVAX beginning in May, and lauded the highs that the stock had reached in that time. The stock had run from our observed low in May of 36.08 to an impressive 111.77 (+210%).

Following another week of solid sessions, one after the other, NVAX has now reached an incredible new high of 144.54. That works out to an increase of 301% in a shade over two months! Even those who had only caught our update on July 8th, could have caught NVAX as low as 93.48. From that point, Friday high comes to an upswing of 47%

VYST is an OTC stock we caught for some really nice gains in the spring and recently tagged again in our report on July 9th. Shortly thereafter we watched as VYST ran from .0178 to a new high of .044 on Friday. That’s a gain of 147%

Like many OTC plays we’ve recently been attracted to, this one has made multiple distinct and noteworthy moves.

Novavax, Inc. NVAX – Review
.
Among all of the plays we’ve covered this year with coronavirus synergies, one of the top picks has definitely been NVAX. We began tracking this stock back in May, with our first mention coming on May 12th. On that day, NVAX changed hands for as little as 36.08. The stock basically never looked back, with that being the lowest price it will have seen since then.

Yesterday, after roughly seven weeks of continuous upward momentum, NVAX has attained a new high of 111.77. That works out to an overall rise of 210% in a span of less than two months! That’s a good move for any stock, but for one that was already above $35, it’s nothing short of amazing.

We have been in a dark period for big name earnings for at least a couple of weeks now, but we are starting to see some large caps reporting again today. The two that are catching our eye most off of the current calendar are SMART Global Holdings, Inc. SGH and The Simply Good Foods Co. SMPL. Both companies posted a convincing beat of expectations on the street.

Here are a couple of corresponding ideas that we can track today and into next week:

We would like to kick things off this morning by circling back around to an options idea we had submitted last week. We targeted the NVAX 05/22 $38-40 Calls which saw their lows on Thursday and ran into this week, posting some really nice moves.

We wanted to highlight those, potential gains, although it would appear the stock’s run is over, so we likely won’t be tracking these into expiration. The company announced a huge capital raise this morning which is not being looked upon favorably by the investment community.

At any rate, the ranges on our NVAX targets from last week into this week were as follows:

This biotech isn’t coronavirus related, and we have not done a whole lot of technical trading since the crisis started, but we do like where this play is on the chart at the moment.

It had come down to hold support near a previous bottom, stringing together some higher lows and higher highs this week, and we’re going to put it on our running watchlist going forward. 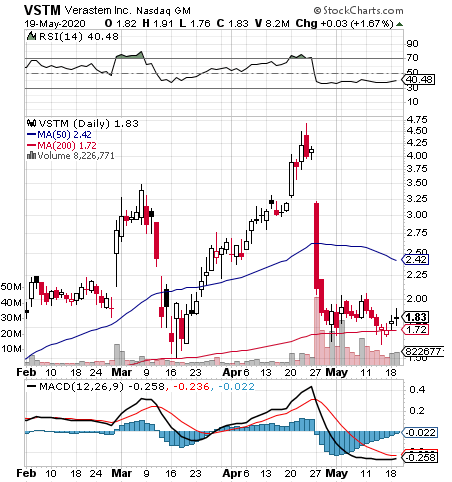