On Tuesday, DUSS released an 8K containing information regarding its pending acquisition of a gold mining property. This adds substance to this very cheaply-priced stock, and with Wednesday’s session seeing a high of .0011 on more than 10X its 3mo. average volume, now is a good time to start monitoring this stock.

The last significant spike on the DUSS chart took it as high as .0015, so a return to those levels from here could facilitate gains in excess of 50% or more. We’d like to see support continue to hold at .0006-.0007 in order for us to remain interested.

We are introducing a new momentum play in ILST today. Like DUSS, ILST represents a company that has just shifted its business toward the mining sector.  Wednesday, the stock woke from a slumber, and moved from a low of .001 to as much as .0034 on record volume.

The company is currently working toward getting their claim prepared for production. The Van Deemen Mine property consists of five un-patented claims totaling approx. 100 acres, and an additional 18 un-patented lode claims in the surrounding area. As with any junior mining project, the road to production can be a long one, so there’s no sense of urgency here. But at its current price level and at this stage of the story, we thought it would be a good time to put ILST on the radar, and begin following its journey.

As you can see on the included chart, conditions appear to be gearing up nicely for a possible surge in PPS. 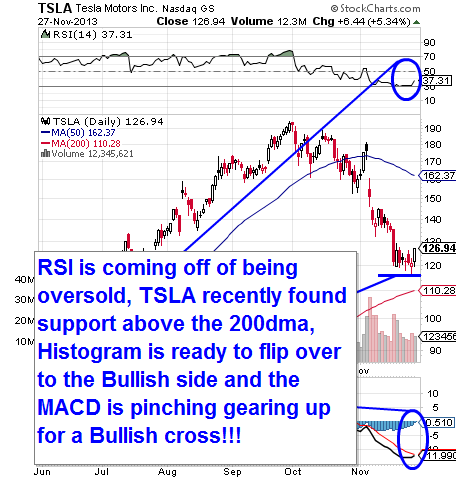 AAPL is another candidate to provide us with some good options-trading opportunities based on current conditions. AAPL weekly Calls could provide a nice day-trading opportunity today that could yield fast profits. We want to radar the 550, 555 and 560 calls, because all week long, AAPL has been making huge gains and the weekly Calls have made multi-bag gains. 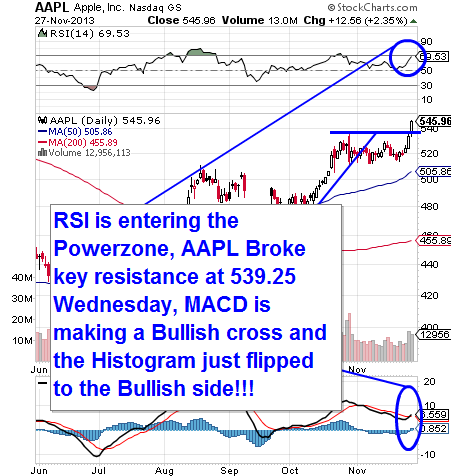 We’ve been talking about ATRM since last Friday, and highlighted it once again on Monday. It would pull back early in the week, and then on Wednesday we got the move we were looking for. From Tuesday’s low of 4.19, the stock would hit a high of 12.40, marking a possible gain of up to 196% for anyone who loaded up on the dip.

Lately, our scans have  certainly been yielding some profitable plays, and after appearing both in Friday’s extended watchlist and yesterday morning’s report, ARIA claimed its place as the next big winner to add to that list. As we approach Thursday’s holiday hiatus, we are expecting market activity to taper as people begin to travel to their holiday destinations and generally prepare for upcoming festivities. We may decide to suspend Wednesday’s newsletter, barring some unforeseen development that may need relaying.

But for now, let’s talk about the big day ARIA had for us yesterday. After opening at 4.06, the stock came back to a low of 3.92  before running up to close at 5.13. The Northerly movement continued post-market, and the stock is gapping up this morning, so we don’t want to let ARIA slip from our radars now. Remember, this stock was trading as high as the 17.00-range as recently as last month, so it still may have some ground to recover.

So far, from Friday’s low of 3.30, the bounce on ARIA has afforded us the opportunity to make up to 55% profit (at yesterday’s closing price) and we suspect that figure could continue to grow today.

CAMT came off of yesterday’s extended watchlist after it had been gapping up in premarket trading, and continued to roll throughout the day. We witnessed a move from 4.11 to a high of 5.29 on 58x the 3mo. average volume, qualifying this as a serious momentum play.

It appears CAMT will gap up once again (currently trading above 6.00) so we have our eyes peeled for continued upward activity today.

On November 8th, MACK appeared in our daily report, at which time we mentioned a “big gap on the chart between the 3.00-3.40 level” that would bring us excessive gains if filled. We went on to mention the key point to watch for was a break of the 3.00 mark, and we did in fact witness that event this past Friday.

The move we were watching for did come to fruition, and the party may not be over yet; the stock is currently trading in the 3.50-range, so we will be very interested to see what happens today. We’d like to see MACK hold support at the 50DMA of 3.26 in order for it to have a good chance to pile on some added gains.

ECPN hit our scanners today as a stock coming off of a recent consolidation that followed a big run on the chart. In early October it ran off of its 52-wk low (.055) and would subsequently hit .41 (Nov 13th) before pulling back to find support at .1142 last Thursday. Since that time it has been logging higher lows and higher highs, so we’d like to see a continuation of that trend which could make ECPN fall under the category of a solid recovery play.

We prepped a video chart on ECPN, click below and take a look:

ARIA is the first of three solid winners to come off of our Extended Watchlist from Friday morning. The stock began by touching a daily low of 3.30, followed by a run into the 4.04 high, marking the opportunity for intraday gains of up to 33%

Just a word of caution, the company has a pending lawsuit in which it is being sued by a multiple plaintiffs in a securities fraud case that will commence next month. On October 9, 2013, the Company announced that the U.S. Food and Drug Administration placed a partial clinical hold on all new patient enrollment in clinical trials of Iclusig, following reports of non-serious and serious adverse events in Iclusig-treated patients. Following this news, the price of ARIAD shares dropped nearly 66%, or $11.31 per share, from the previous day’s closing price of $17.14 per share, to a closing price of $5.83 per share on October 9, 2013, on extremely heavy volume.

As a result, investors who purchased ARIA stock between Dec.’11 and Oct.’13 are eligible to take part in the class-action suit.

PVG was another substantial gainer for us on Friday, bringing us gains to the tune of 48% as the stock tore out of the gate, pausing only briefly near its low of 3.93 before skyrocketing as high as 5.80 early in the session. For the remainder of the day, PVG held much of those daily gains, and managed a strong close at 5.32.

That kind of momentum makes PVG a good candidate for a possible continuation of momentum, so we want to make sure we’re paying close attention as we begin this short trading-week.

ATRM is another one that came out of the gate with guns blazing on Friday. After opening at 8.46, the stock spiked sharply to a morning high of 10.45, nice 24% move.

Later in the session, we observed a bounce from 5.60 back up to 6.68, which added an opportunity for an additional 19% gain, bringing the total cumulative gains for ATRM to a very respectable 43%

When added to the gains we saw from our other selections, our total possible gains for Friday’s session topped out at 124% All in a day’s work!

We observed these two sub-penny plays hitting our scanner on Friday, trading substantial volume. We want to be on the lookout for any possible continuation of momentum heading into this week.

In the case of INVA, the stock was trading at more than a penny as recently as October, and is now coming off of a bottom, so it will interesting to see how much of its lost ground it can gain back. A return to October levels would mean gains up to and exceeding 100% from its current price.