When we released a special report on PMCB back on Tuesday of last week, we commented on the promising nature of trials the company currently has underway relating to various treatments based on its Cell-in-a-Box® technology.

At the end of last week, PharmaCyte announced some promising research specifically pertaining to its diabetes treatment, with the claim that it can actually reverse Type-1 Diabetes in mice.The full paper can be found at http://www.nature.com/articles/mtm201511. Human trials are the next step to take, and needless to say, should the treatment prove effective using PMCB’s encapsulation technology (that we described in our initial report,) acquisition by a large pharmaceutical company could become a very real possibility.

That also seems to be the thinking on the Street, as PMCB has made some impressive strides on the chart over the past several sessions. From the low of .12 that we observed in this play on 04/08, it has made its way up as high as .22; a respectable 83% overall increase. That impressive high came during yesterday’s session in conjunction with a breach of the current 200DMA of .19. 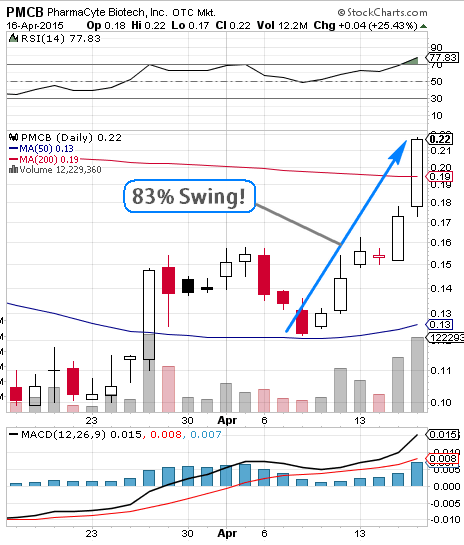 PMCB will be one that we want to keep on continuous watch due to its potentially industry-disruptive diabetes treatment.

PZOO has been a flipper’s dream since we re-initiated coverage on it just a couple of weeks ago. Yesterday’s low registered as .008 before the stock bounced back to .0097, a 21% intraday swing.

It was the same story on Wednesday; we saw PZOO dip to a low of .0074 before returning as high as .0103 (+39%) We’ve continually stated that we’d like to see the stock trading at or above the .008 range which, for the most part, it has continued to do.

CEO David Cunic appeared in an audio interview yesterday, and this morning we’re seeing another PR directing our attention to an 8-K filing which outlines a recent agreement, among other things, so our readers might want to check out those links.

In the meantime, we’ll be on the lookout for upcoming intraday gain opportunities from PZOO, such as those that it has delivered numerous time over the past several sessions.

We also want to make a quick mention of INVE, which made a solid 14% move yesterday as it traded in a range from 11.12-12.67. It came on over ten times the 3-month average volume, so we’ll be observing this one as the week draws to a close, and possibly into next week.

PBR, which did so well for us earlier this year, is a point of focus for us once again. Since the huge gains the stock afforded us from March-May, it has consolidated a bit, and bounced off the 200DMA (Currently 13.69). We are turning our attention to PBR once again, because we want to be ready when the next upswing comes into effect.

We’d like to see support hold off of the 200DMA, and for the stock to make higher highs and higher lows to confirm the trend. When that occurs, we’ll be turning to the options chain as we did this spring,  and presently, we have our eyes on the 07/19 $15 Calls, which as of yesterday were trading in the .30-.38 range.

In the event that the stock tests its recent swing high of 15.85 by the expiration date, it could spell a double or triple for those contracts, so we’ll really want to keep a close watch.

We’ve been tracking NQ this week; including the play in Monday’s Extended Watchlist, and this morning, we are seeing some serious pre-market activity on the stock. It is coming off of a recent bottom, and has already begun to fill one of the gaps on the chart this morning (Up to a high 10.45).

This morning’s announcement  is regarding the independent findings of the investigative committee assigned to look into fraud allegations levied against the company in the fall. NQ looks as if it will be cleared of any wrongdoing, and that appears to be contributing to this morning’s spike.

We could be looking into this one at just the right time; in addition to this morning’s good news, the company is also due to release its annual financials, and some positive figures could add even more fuel to the fire. Conditions appear to be reaching an ideal level for us to potentially register some sizable gains with this play. To kick off the week, we placed JCP on watch via Monday’s Extended Watchlist, so let’s finish things off by taking a look at what happened this week. We saw a consolidation down to 8.18 before the earnings release hit the wires yesterday, after which time the stock began to soar.

Already in pre-market trading today the stock has bounced back to hit a high of 10.15, so we’ll be anxious to see what can happen if the stock can break past this mark which also coincides with a recent swing high in November/December.

The 8-K filed contained both increased quarterly figures as well as guidance for 2014, and things seem to be headed in a positive direction overall, so we’ll continue to monitor JCP over the foreseeable future.

Noticing a sizable increase in volume in RNBI during a routine scan on Wednesday prompted us to put it on yesterday morning’s watchlist, and it turned out to be a beneficial decision. We would see the stock spike from a low of .18 running to .24, giving traders a chance to bank up to 33% intraday.

A stock that was trading by appointment only prior to its big rise in volume this week, gaining this much ground on the chart demands the highest level of caution for those who’ve yet to exit their position.

We just want to take a minute to address a cautionary statement by influential hedge fund manager David Tepper yesterday, regarding his overall sentiments toward current market conditions. His warning to traders to avoid going too long at the moment, sent ripples through the investment community, and the overall markets saw a pullback (leading to a spike in the VIX/VXX).

Occurrences such as this can be used to profit no matter which way things go; depending on how the public reaction is going to play out, we will be looking to adjust our strategy by trading options on either the SPY, in the event that things turn back to the bullish side rather quickly, or the VIX, should we see a sustained downturn.