One item of interest that we’ve been waiting to touch upon is AAN. We’ve watched as the stock has taken quite a beating over the past few weeks, and are presently scanning for a bottom. After losing so much ground over so short a time period, when support is found, the recovery on AAN could end up allowing for some rapid profits in the options chain.

While we need to first observe a solid base of support before setting our short-term call strategy, there are already a pair of longer-term contracts that we’re going to put on watch. The November 22nd $29 and $30 Calls (trading yesterday at 3.20 and 2.05, respectively) could see significant rises in value once a reversal occurs on the chart.

We brought RFMD up as a topic of discussion this past Friday, mentioning that the spike catalyzed by the release of record revenues was likely to lead to a classic ‘dip-and-rip’ scenario. That keen instinct has thus far paid off, as the stock did indeed dip to 10.74 before rebounding as high as 11.79 (+10%), achieving higher lows each day over the past four sessions.

As a result of the trend, we’re going to have our eyes on the September $12 Calls, which closed at .70 yesterday.

FTNW hit our news scanner this morning and will be a stock that we monitor as the trading session opens today. The PR alludes to some lucrative contracts, so we’ll be interested to see how it reacts to such significant press.

XUII continued to run following the afternoon update we sent out yesterday, achieving a new high of day just prior to the close at .0026, marking a full 100% move in just a single day. The stock closed just one tick below at .0025, and ended up trading 744M shares, well over 10x the 3-month average volume going into the session.

Moving forward, we’ll be keeping a close eye on XUII, which will need to maintain support at or above .0018 in the worst case scenario to hold our interest.  That would be our theoretical stop-loss point, and as you can see on the included chart, the next major area of resistance doesn’t crop up until .0033. 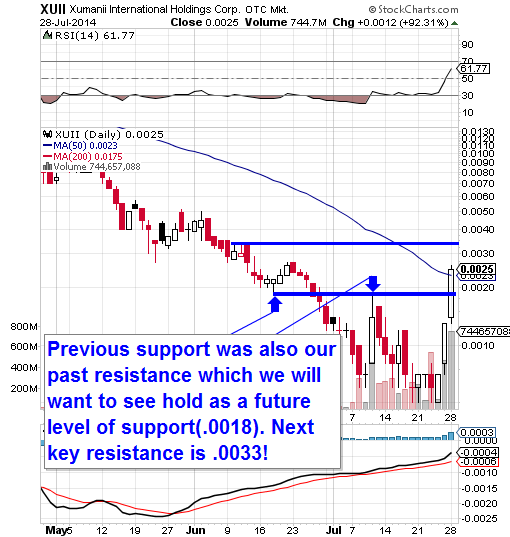 Based on the momentum into yesterday’s close, we may be looking at a gap up from XUII first thing this morning. Ideally we’d like to see the 50DMA of .0024 hold as support.

Reigning as one of our most successful picks of all time, PLUG has appeared in our reports more than 40 times since we first caught it at .135, near all-time lows on February 28th, 2013. We tracked this play from those levels all the way up to an astonishing high of 11.72 roughly a year later, so PLUG will always hold a special place in our trading hall of fame, and never really get taken off of our watchlist.

We want to bring PLUG back to the forefront of the conversation again this morning, on the heels of a PR that just hit the wires, regarding a big purchase order from the world’s largest retailer. The stock is gearing up for a gap-up in pre-market trading, so we’ll want to keep a sharp eye on this one. This is the kind of press that can lead to rapid short-term gains.