We thought some of Wednesday’s momentum in RSH could spill over into the day’s session, and said as much in our morning report yesterday, and the stock did not disappoint.

RSH continued its resurgence, beginning the session at just a hair under a dollar and barreling its way up to a subsequent high of 1.60. That’s an intraday run that afforded traders a shot at up to a 60% profit. In closing at 1.43, RSH held a majority of its gains on more than 10x the 1-month average volume.
RSH has now made notable gains in each of the last three trading sessions.

We alerted this stock prior to the the .55 annual low reached earlier this month, and from that level yesterday’s peak pricing represented an overall increase of  190%

A tag of SGOC in yesterday’s extended watchlist would turn up an excellent opportunity as the stock proceeded to run rapidly in the first half hour of trading, from a low of 2.07 to a high of 3.22 shortly after 10am.

DRNE is a stock we’re going to be monitoring into next week; currently it’s consolidating off of a nice 46% move (.89-1.30) we witnessed from last Friday  to this Monday.

We’re going to be looking for DRNE to hold support at or above the current 50DMA of .78, and will have our eyes peeled for any chances that might present themselves with a potential rebound.

In closing we’d like to wish everyone an enjoyable long weekend for the Labor Day holiday, and we’ll see everyone bright and early on Tuesday morning to kick off what promises to be an exciting short week!

Our continuous tracking of the PBR option chain never seems to go very long without offering up significant opportunities.  Beginning on August 20th, we placed the Jan.17th $19 Calls on watch for a longer-term trading idea. Following that tag, we would observe those contracts trading at a low 1.23.

This week PBR has pushed to new highs, breaking the $19-mark and maintaining it into its close at 19.21, which landed our $19 Calls at 2.25. That represents a one-week increase of 83% and that figure could stand to inflate even further.

Those who have been following PBR with us since March, when we spied a low of 11.25 will be pleased to know that as of yesterday’s new high of 19.32, the overall increase we’ve seen in the stock amounts to 72%

We reminded readers of our recent bottom call of RSH yesterday morning, having seen the stock touch its 52-week low at .55. Over the last several sessions it had been regaining some ground, and that pattern continued into yesterday as well.

RSH would trade as low as .91 before pushing through a dollar and closing at its high of day at 1.09. That’s an increase of 20% on approximately 7x its 1-month average volume; a strong move. With a close like that, we’ll be looking for some of the momentum to carry over.

Yesterday’s closing price represents an increase of 98% over our observed low of .55.

As most of our regular readers will remember, we tagged RSH as a bottom-play a few weeks ago after noticing that the stock had hit a 52-week low of .55 and was showing signs of a possible turnaround on the chart. It took one more dip back to .55 before that started to happen, but as it turns out we called the bottom quite well.

Over the past several sessions the stock has been exhibiting sure signs of an uptrend, and yesterday RSH really began to break out nicely, heading all the way back to a high of .8941, a solid 62% increase off of our observed low.

That run broke two key resistance areas at .74 and .79, which we’ll want to see hold as support moving forward, and the next key resistance is going to come in roughly around 1.05. Already in the premarket we’ve seen RSH trading as high 1.03. 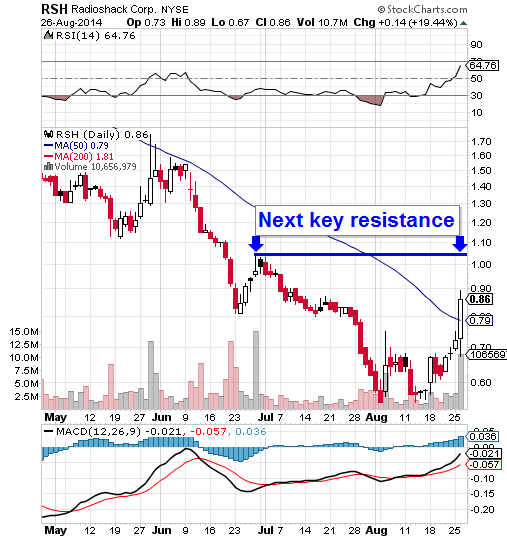 VII appeared in yesterday’s Extended Watchlist just in time for us to catch a really nice move. The stock traded in a range from 3.84 – 5.30 during yesterday’s session, marking possible gains of up to 38%

The run came on over 4.9M shares traded, exceeding the average monthly volume by more than 26x.

DGLY pushed its upper limits again yesterday, for the fourth straight session since we caught this stock last Thursday at low of 5.75.

We’ve now seen a move to 16.24, which represents a total increase of 191% in less than a week, so congratulations are in order for any traders who were able to take advantage of this mover!