As if the two-day, 1102% swing we had already witnessed from NOUV between Thursday and Friday weren’t enough, the stock continued to show volatility with a nice intraday move yesterday following its inclusion in our morning report.

NOUV traded in a range from .0046 up to .008, marking an intraday rip of 74% which came on roughly eight times the 3-month average volume. It also closed having held more than half of its daily advance, which puts us on alert to continue monitoring its activity as we progress through the week.

***Participate in our daily traders chats via Skype! The NOUV pick came courtesy of one of our regular participants in the room last week. It doesn’t matter if you’ve just started trading, or if you’ve been doing it for ages, all of our readers are most welcome. Simply send a Skype contact request to username: ‘stocksumo’ and join us!

We want to place NGD on an extended bottom-watch after the activity which has transpired over the past few sessions. The stock fell off of a cliff, dropping more than a third of its total value in less than a full trading week. The move comes in conjunction with the announcement that production costs per ounce would rise in 2017, as well as the company coming up short on financing for the buildout of its ‘Rainy River’ mine by more than $100M.

While those are certainly noteworthy occurrences, we look at the rapid drop-off in PPS more as an opportunity to get some skin in the game at a discounted price. We’ll be watching NGD closely for a reversal, which admittedly might not happen right away, but could be quite a prime rebound opportunity when it does.

It’s worth mentioning that despite production costs per ounce rising from just under $700 to more than $800 for NGD, even at the higher figure, it still places them well in the profitability range (gold currently trading for, and at a significantly lower cost than many mining outfits.

Speaking of longer-term ideas, we’re looking at WMT this morning after the stock posted a near 9-month low on Friday, followed by a bullish candle to kick the week off yesterday.

It comes on the heels of the news that the retail giant had fired a shot across Amazon’s bow, with the revelation that it would be offering free two-day shipping on over 2 million items via Walmart.com, which cuts Amazon Prime’s main incentive off at the knees.

We’ll be very interested to see how the market responds to such a development over a longer time frame. In correlation, we’re going to be monitoring the activity in the WMT 03/03 $68-69.50 Calls in the days and weeks ahead.

We’re noticing a couple different possible bottom-plays that we want to start the week off by highlighting this morning:

Rite-Aid Corp. RAD – This stock has been repeat target for us at various times in the past, and we want to circle back around to it today as we’re noticing the recent activity. The stock plunged to new lows on Friday, yet regained almost all of that ground before closing nearly flat.

From the current place on the chart, and given the present indicators suggesting that a rebound could soon be forthcoming, we’re going to want to radar RAD on both the stock side of things, as well as signaling an idea in the options chain. In that case, we’re going to be interested in the RAD 02/25 $6-7 Calls, which gives us plenty of time for the stock to realize the recovery that we’re after.

Cymabay Therapeutics, Inc. CBAY –  CBAY is another play we’ve caught this morning as began showing signs of life after having hit its lowest PPS levels in over two months on Friday, as well as gapping up moderately in the premarket today (High: 2.15)

We’ll be looking for the stock to maintain support in the channel between the 50DMA (1.89) and 200DMA’s (1.96) on any pullbacks as things get going today. As you can see on the chart snapshot below, various indicators leading into today’s session appear favorable for CBAY. 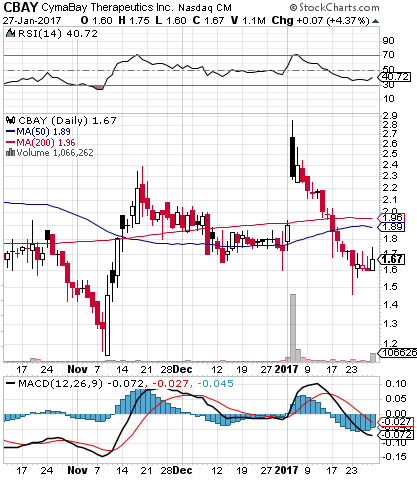 One of the regular participants in our daily traders chats via Skype hit it big with an excellent call that was shared with the room last week. He swooped in with a sell suggestion on Friday that was perfectly timed.

Our members had a chance to jump into Nouveau Life Pharmaceuticals, Inc. NOUV at .0008 on Thursday, and the stock hit .0089 on Friday just after the following message was communicated, marking a two-day swing of 1102% The stock subsequently tanked, outlining the accuracy of DJ’s call. 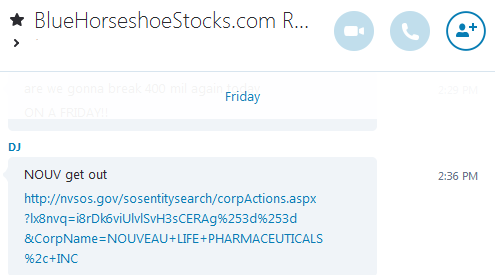 As we always remind our readers, anyone is welcome to participate in our daily traders chats. Simply send a Skype contact request to username: ‘stocksumo’ and we’ll fill you in on how to join in!

We initially began tracking PNTV this fall, mentioning it on Oct. 20th and Nov. 8th, subsequent to which time we would witness the stock trading at a low of .0089.

We added a reminder in our report on Thursday as it had begun to ramp up heavily, and on Friday it went on to hit a new 52-week high of .048. It extends the overall gain we’ve observed in this play over the past couple of months to an impressive 439%