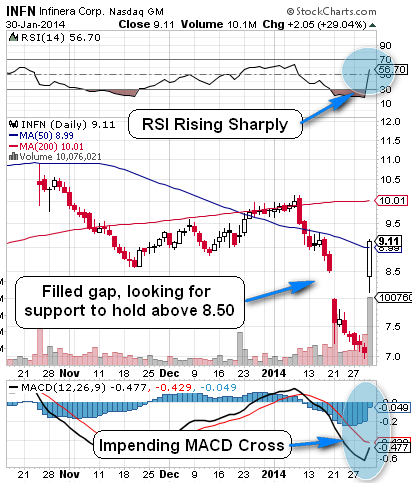 FITX is among the cannabis stocks that we’ve been tracking since 2012 that began to explode when 2014 trading commenced on January 2nd. We alerted readers of the likelihood of that occurrence in our final report of 2013 on New Year’s Eve. That day, we observed a low of .0045, and yesterday, FITX attained a new high at .065, which means that in just a month’s time, this stock has increased in value by 1344%

We’d like to congratulate anyone who was able to obtain even a fraction of the total possible profits that FITX has afforded us so far in 2014. 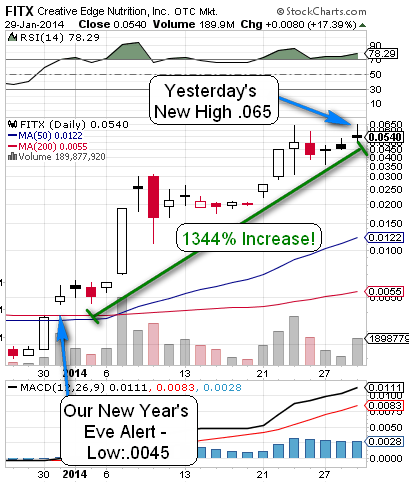 Marijuana related stocks are still very demanding of our attention. Even as some of our other interests in the field tapered back this week, EAPH, like FITX, was able to achieve new highs. EAPH also serves as a prime example of why we don’t discard these pot plays when they consolidate, because they have provided rebound opportunities galore.

In this particular case, EAPH came off of its New Year’s pop, and bounced off of the .008-area to recover all of its previous gains and then some. At Tuesday’s high of .028, our total possible gains from our original Jan. 8th alert from a low of .0041 stood at a whopping 583%

A golden cross formation is also in the making on the EAPH chart, which gives us all the more reason to continue to monitor this stock. 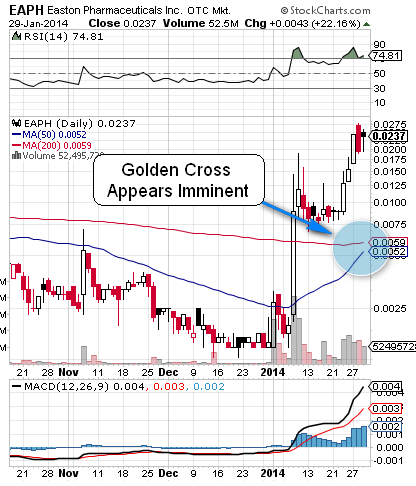 Here a couple of new plays to add to our now-enormous marijuana stocks watchlist:

TTDZ catches our eye on the heels of a filing that denoted the reduction of shares of TTDZ common stock from 1.5B to 1.2B. The stock made a huge move during yesterday’s session and appears as if it could gap up to start the day.

Already having been on a sharp uptrend in recent sessions, GLCO had after-hours news concerning the acquisition of Hemp Life Today, LLC and its online Hemp and Medical Marijuana products and information website, HempLifeToday.com, essentially launching itself into the cannabis sector. We will want to follow along to see how the trading community will receive this latest development.

Transbyte Corp. ERBB
–
Among others, ERBB was one cannabis play to have a bang-up session on Tuesday. After we watched it make a 23% intraday move from .012-.0147 on Monday, the stock continued to push its upper boundaries, opening at .0155 and reaching as high as .0193, an added gain of 25% It closed with strength at .019 on nearly 330M shares traded; that’s well over 3x its 3mo. average volume.

Be on the lookout for where this latest rush of momentum can carry ERBB, and aware of the possibility for bounce action in the event of any pullbacks.

Growlife, Inc. PHOT & Creative Edge Nutrition, Inc. FITX
–
PHOT produced an exciting PR this morning that we wanted to share, as it it ties it to another of the cannabis stocks we’ve been following that has also produced mammoth gains this month, in FITX. It’s a development that will renew our interest in following the stories behind both of these stocks even more intently than before:

WOODLAND HILLS, Calif., Jan. 29, 2014 /PRNewswire/ — GrowLife, Inc. (PHOT), a diversified company operating in the legal cannabis industry which develops, markets and deploys products and services of legal cannabis, is pleased to announce that Organic Growth International, LLC (“OGI”), its previously announced joint venture with CANX USA, LLC, has entered into a series of agreements with CEN Biotech, Inc., subject to the approval of the GrowLife Board of Directors.  GrowLife currently has a 45% ownership interest in OGI, with conditions under which it can gain majority interest. CEN Biotech, working under the inspection and authority of Health Canada, has completed the extraordinary governmental processes in Canada to receive approval to begin constructing their state of the art medical marijuana facility in the City of Lakeshore, Ontario, Canada. >>> FULL RELEASE

VaporBrands International, Inc. VAPR & Hemp, Inc. HEMP
–
Speaking of stocks in the marijuana sector that have joint ventures with others that we’ve covered extensively, we find VAPR. This one cropped up on our radar with a press release yesterday which ties it to another of our all-time favorite pot stocks; HEMP. The stock has been on the move for the past several sessions, so a note of caution is in order. We may find that the stock pulls back from extensive profit-taking, and in the event that occurs we will be watching closely for a bounce opportunity.

MediaTechnics Corp. MEDT
–
We also want to radar MEDT, a sub-penny play that has shown a capacity for quick swings in recent weeks. Over the past three sessions the stock has moved up from .0004, to as high as .0017 during trading yesterday. In early January it made a similar move from .0004-.0012, so we have a pretty good idea of the kind of volatility to expect from this play. Triple-zero stocks are known to be high risk, but a properly timed swing can lead to rapid gains for the savvy trader.

CleanPath Resources Corp. CLNP
–
This is another stock that falls into the high-risk/high-reward category of sub-penny momentum plays. The stock has been as low as .0002 as recently as Monday, and yesterday broke through a psychological barrier at .001, going as high as .0012. We are going to put this on our watchlist in the event of continued momentum pushing it past yesterday’s highs. Should it pull back into sub-.001 territory, we’ll be on the lookout for support and an eventual rebound.