NGBL is one of a handful of plays that we’ve been tracking this week to record yet another solid session yesterday. On Wednesday, brought the stock to our readers, while it was still trading in the super-subpenny range at a low of .0009.

The stock showed us a nice intraday run that day, and yesterday, registered another solid intraday upswing which carried it from .001-.0015 , a 50% move. As we stated yesterday, we’ll stay interested in NGBL as long as it continues to hold support above the previous session’s swing low as it did yesterday.

ORRP appeared in our premarket report on Monday, and on that morning we witnessed a low of .265. In an impressive multi-day run that saw the stock record higher highs and higher lows each and every day this week, ORRP managed to set a new high once again yesterday.

The top mark on the day was .698, which from our observed low of .265 represented a four-session rip of 163% With the kind of protracted momentum we’ve witnessed to this point, we’ll be certain to stay on ORRP’s trail.

It’s been quite some time since a cannabis stock hit our radars, and CNAB broke the lull yesterday with a nice single-session move after we included it in our daily watchlist. The stock ran from .28-.40 on more than 3X its monthly average volume, marking a run of 43%

With elections fast approaching and marijuana being once again brought to the forefront as national attitudes toward its prohibition continue to shift to the negative, we’re going to be keeping a more keen lookout for potential plays in this arena. Perhaps most notably, California is set to make a decision on legalization for recreational purposes, a measure that is expected to pass if preliminary polling is to be believed.

We pointed out OWCP as a prime bottom-play opportunity yesterday morning, and our timing really couldn’t have been much better.

We saw a really nice jump out of the gate as the stock blazed a path from .0045 to .0074, a 64% intraday run, before holding in strong for a .007 close. The chart still appears very ripe for the possibility of further gains, with a rapidly strengthening RSI as well as a a bullish MACD cross in progress.

With Costco beating on earnings post-market yesterday, and the chart having come down to a support level near its four-month lows, we want to signal a range of both weekly calls, as well as a couple that expire at the end of next week in the event that the heavily oversold stock is ready for a reversal as it appears it may be. 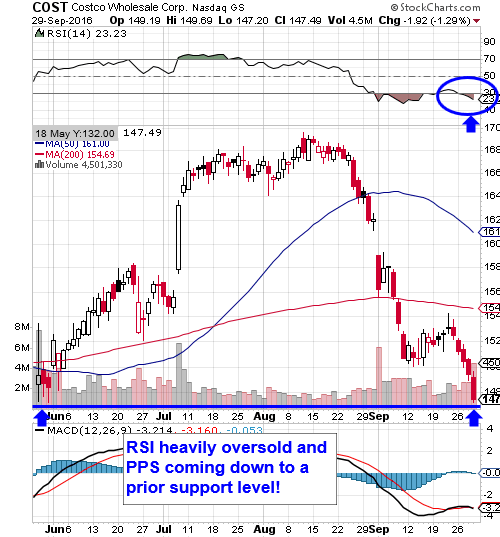 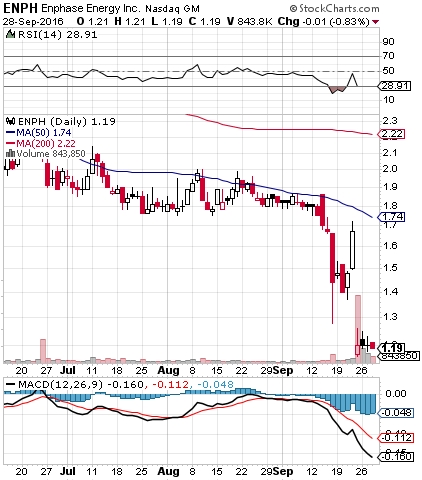 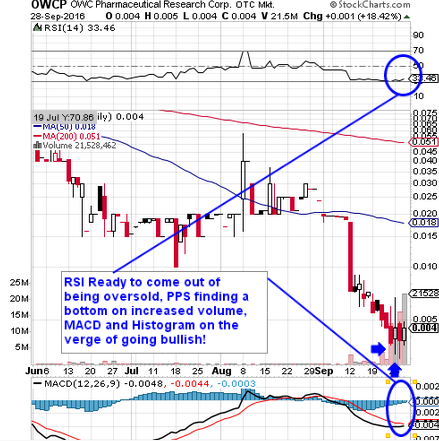 GNID was far and away the best call from yesterday morning’s report. It wasted no time running out of the gate hard, and making a huge push from its morning low of .078 up to .205 before lunchtime.

That impressive move worked out to an intraday pop of 163% on greater-than-average volume, a highly respectable single-session run.

The stock maintained more than half of its daily advance into the close at .15, and registered higher highs and higher lows for the fourth straight day, so we’ll keep it on our radars moving forward in the event of a continuation of that pattern of momentum.

We tracked SGBY on a major run at the beginning of this month that took the stock from a low of .0103 up to .03, a 191% swing. It spent the following weeks under consolidation, ultimately finding support off of the .0068-mark last week.

Yesterday, SGBY had returned to a high of .02, marking yet another upswing, this time amounting to 194% We’re going to want to stay on SGBY’s trail as we cruise through midweek, as a return to the highs we witnessed at the beginning of the month from current PPS levels would spell gains approaching 100%