The focus of this special report to kick off the holiday-shortened week is GYST, which is a company with active operations in both the mining and cannabis industries. As our regular readers can attest, those are two market spaces that we have been very fond of in the past, but to find one company with its hands in both is an interesting change of pace.

The company has been actively engaging its shareholders on both fronts as well, recently issuing key updates, but before we jump into that, we also want to point out the massive share restructuring GYST announced this month, in which it immediately effected a 95% reduction in its authorized shares, reducing the count to 500M. (>>View PR)

As we hinted at above, GYST building out a scalable business operation in the cannabis industry that includes multiple California-based cannabis delivery services and dispensaries.  The initial delivery service began operations in March 2017 and has rapidly expanded into multiple target markets with plans for aggressive expansion for the remainder of 2017.

Per a recent update, the revenue intake and expansion of its cannabis operations has been even more aggressive than the company itself expected, which is an exciting prospect. California only recently legalized the sale of recreational marijuana, but its medical programs and cannabis counter-culture has been thriving for decades, beginning in 1996 with Proposition 215 (The Compassionate Use Act).

The CEO of GYST, M.T. Soeparmo stated, “Our company is growing at a rapid pace … we are projecting 20K to 25K in revenue for the month of May and based on current trends, that number should surpass 30K as early as June.  The scalability of our business has allowed us to expand our reach well beyond our original target markets.  In fact, plans for additional expansion are well under way.” (>>View Full PR)

More recently, Soeparmo mentioned that more updates on GYST’s cannabis operations are forthcoming, so we’ll definitely want to keep an eye peeled for that.
______

With the cannabis aspects of its business clearly gaining traction faster than the company expected, GYST management reminded shareholders last week not to forget the promising mining operations it is currently carrying out in South America.

According to Graystone, its mining operations focus primarily on acquiring properties that require a lower capital investment to begin mining operations. This approach may reduce the size of the deposits that the company can produce, however, by generating revenue from smaller mining ventures, the company can build a solid foundation and the needed infrastructure to undertake larger ventures such as hard rock projects in the future.

M.T. Soeparmo, CEO, said, “Our current mining operation is located in Suriname and is a 160-acre site. With only 12 acres of that being mined currently, the operation has already achieved break even status.  148 acres is still yet to be mined actively so we estimate a five to seven year life span on the current 12 acres and tested locations with other locations currently being scouted.

Mr. Soeparmo finished up with, “We could not be more pleased with our current business operations.  The cannabis business has exploded in a very short time frame and our mining operations provide a sizable long term contribution to our revenue goals.  We look forward to sharing more information with investors in the coming weeks including an up to date website that outlines our current business operations, recent press and financials.” (>>View PR)

Lastly, we want to take a look at the current setup of the GYST chart.

A return to the 52-week high of .0215 from current PPS levels could make for gains of more than 80% Presently, the RSI is not overbought by any means, and appears rather bullish, being above 50-line with the MACD showing a recent bullish cross! 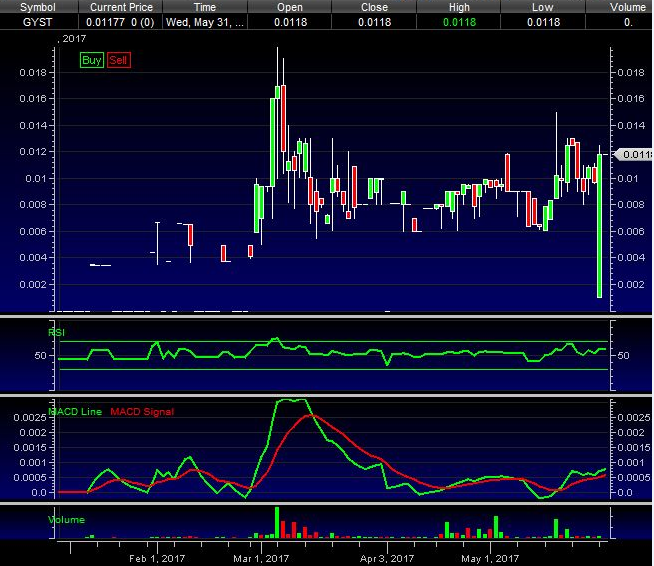 As mentioned above, GYST is currently working on a new and updated website, so for now, you can begin your own due diligence on the company by starting at its page on OTC Markets (>>View GYST Page)

We tagged CNXS in a bitcoin-related watchlist in Thursday’s premarket report, and the stock finished out the week on an extremely high note. From our observed low on Thursday, it made a fantastic two-day swing for us.

CNXS traded up from .0007, cracked through from super-subpenny to subpenny range, and hit a high of .0017, a 143% move which occurred on heavy volume.

We weren’t very surprised to see some nice plays come out of that watchlist, as bitcoin stocks are trending considerably at present.

Speaking of super-subpenny plays, from Friday’s extended watchlist came OTTV, a stock which hasn’t been trading too far above its 52-week lows recently.

We saw a solid run from OTTV on our first day of observation with the stock trading up from .0004- to .0007 for an intraday rip of 75% on slightly greater-than-average volume.

Before breaking for the long weekend we wanted to try to continue a pattern of post-earnings options trading success we’ve had this spring. We did so with the BIG 06/16 $55 & 57.50 Calls, and were very pleased at those contracts’ performances for our first day of tracking.

We want to give our readers advance notice on a special report headed your way tomorrow! We’ve got a new pick all loaded up for tomorrow morning on a cannabis-related stock trading under .05/share that you definitely won’t want to miss!

Be sure to scan those inboxes or watch our blog at BlueHorseshoeStocks.com shortly after 9AM Eastern tomorrow morning!

Our primary area of focus in terms of fresh picks in yesterday’s premarket report was in post-earnings options ideas, and essentially everything worked out in our favor, beginning with our ideas for the Best Buy chain, which were the BBY Weekly $55-58 Calls.

All seven sets of contracts in our highlighted range gave traders a chance at HUGE multi-bag gains on the day ranging from a triple all the way to a TWELVE-bagger!

Our ANF calls didn’t disappoint either, despite the fact that Abercrombie’s was a much more mixed earnings release.  We said we’d be looking at the ANF Weekly $13 & $13.50 Calls, and saw some solid moves out of both.

Based on the present look of the ANF chart, we’ll still want to track these plays heading into the long weekend, but be forewarned, dealing with weekly options contracts on a Friday is for expert traders ONLY!

We’ve had so much options trading success this earnings season, there’s no reason not to add in a couple more fresh ideas before we break for the holiday weekend.

Big Lots beat on profits and raised guidance in its premarket release today. With no weekly contracts to look at, we’ll put the BIG 06/16 $55 & 57.50 Calls on watch in the weeks ahead.

ULTA Beauty, Inc. ULTA – This play is gapping up hard after its own earnings beat yesterday. We’ll want to keep an eye on the ULTA Weekly $302.50-310 Calls (Again, to be considered by expert traders only)

We offered up a few bitcoin related stocks to watch yesterday in light of the hysteria over bitcoin reaching all-time highs, and the one that outperformed the rest turned out to be CCTL.