Skip to content
Good Morning Traders! Here it is- the final report of 2014! We had an amazing year, with huge gainers popping out of the woodwork left, right, and center! We want to take this opportunity to thank all of our readers for being a part of our community, wish you all a Happy New Year while reminding everyone that the best is yet to come… Each year our resolution remains the same: To make the upcoming year our best one ever! We’ve succeeded time and time again, and have no reason to believe that 2015 will be any different so be sure to stay with us! Cheers!

NeuroDerm Ltd. NDRM
NDRM exceeded all expectations yesterday after we caught it on an early morning news scan; it spent the entire day in full-on breakout mode setting records in both price and volume, trading almost 27X the norm over the six week period since the stock’s IPO.

Positive response to yesterday’s early morning press statement hurtled NDRM from an early low of 8.16 all the way up to 19.07 just prior to the close, making gains of up to 134% possible.

We’ll still be standing at the ready for an eventual course correction and chance for a dip-and-rip maneuver, but any way you slice it, NDRM is getting marked down as a huge winner. It’s a great way to close out what has, on the whole, been an absolutely stellar year.

GDX and SLV have each been maintaining higher highs and higher lows since reaching a bottom in November. As we head into the New Year, we’re going to devote a good amount of focus to gold and silver, and tracking these indices and their options chains is going to be a good way to do that.

In particular, we’re going to be monitoring a few specific sets of contracts for each play:

As you can see from the side-by-side chart we drew up below, GDX and SLV are looking similarly ripe. We’ve got SLV breaking the 50-Line on the RSI, and GDX following closely behind in that regard, we’re seeing testing of the 50DMA’s on both charts, and each of the MACD’s are giving the indication of bullish crosses. 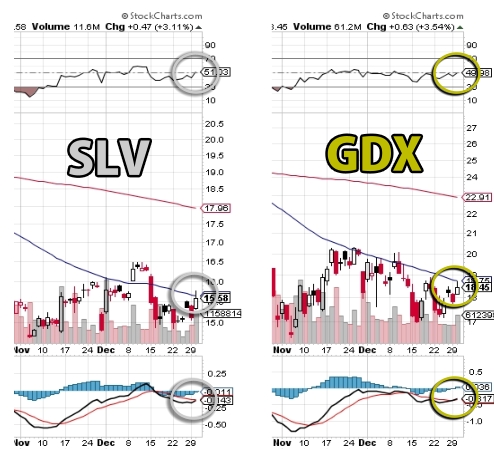 Side Note:
We’re also going to radar HMCP, a sub-penny momentum play that has had an interesting past few sessions. 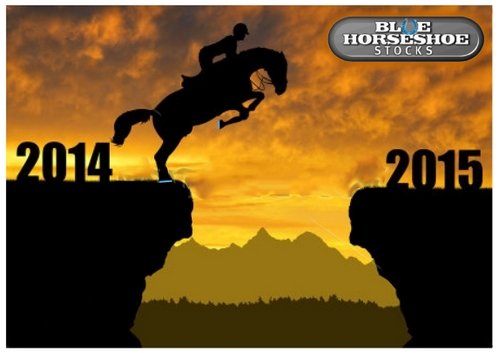 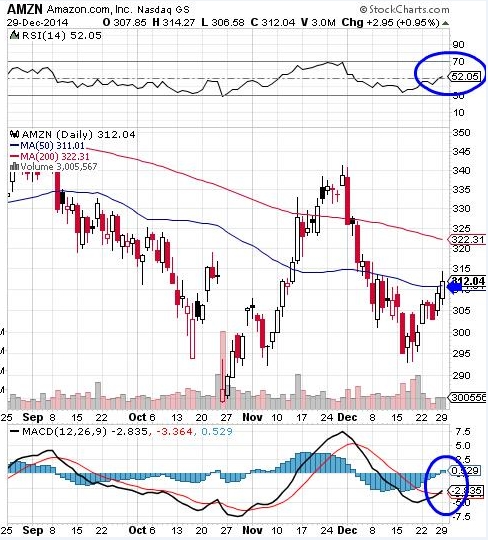 We’ve been tracking TASR since late November, and the stock has gained a good bit of ground over the last month, so we wanted to touch base and update readers on its performance so far. December 1st was the day we witnessed the low on TASR with the stock touching 20.79 during that session, and it hasn’t looked back yet.

Continuing orders from police agencies for TASER’s body-worn video cameras has fueled quite a run, as  the stock managed to break to new highs since we’ve been paying attention on Friday, despite the holiday-shortened week. TASR ran as high as 27.65, which, from the low we observed roughly one month ago, represents an increase of 33% It also puts the stock effectively in blue skies, trading as high as it has in ten years.

We like the trajectory TASR is on, with current events seeming to support a case for the stock going even higher. Amid growing calls for more law enforcement accountability from both the public and the agencies themselves, during a time when incidents between citizens and officials appear to be reaching critical levels, TASR is positioned perfectly to capitalize on the fallout. As we’ve mentioned before, TASER is a trusted name in law enforcement and the public arena, and thus a natural choice for technology that promises to create more transparency in local police departments. It makes it a story that we’re likely to follow over the long-term.

JOB has been on quite a run lately, coming up from the .20-range earlier this month, and we’re going to be monitoring the stock as we kick off another split-week. Over the past several sessions, JOB has pushed its way into blue sky breakout mode, and we’re going to be on the lookout for a continuation of the significant momentum that has been building in the stock.

At a certain point, profit-taking should begin to peel JOB back a bit, and so we’ll also be on the lookout for a dip-and-rip when that pullback leads to an eventual bounce.

The last time we mentioned APP roughly a week back after seeing nearly 100% in gains, we gave the prices at which we wanted to see support hold as the .85-1.00 range. The stock has managed to maintain above a dollar for the most part, and we wanted to give it another nod this morning, and remind people that it still remains on our watchlist.

There seems to be a Golden Cross setting up on the chart, another reason why we want to establish a close watch over this play. Additionally, last year around this time and from roughly this price range, APP began a three-month run that brought it to well over two dollars. This has traditionally been a seasonal play for us, so we’re always open to the possibility of history repeating itself.