After the previous two sessions of backsliding for the markets at large, today we could be in line to see a reversal, especially after a high impact jobs report which exceeded expectations, as the private sector added 234K jobs in January when 190K was the expected figure.

We’re going to focus on the SPY as we often do when we’re looking for a market analog, and signal some contracts for observation; the SPY Weekly $282-284 Calls.

We also want to give our attention to Boeing this morning in the wake of a very positive earnings report. In addition to a beat on profits, the company boosted its 2018, including ratcheting up production of Jetliners by 7%.

As a result the stock soared in premarket trading, past previous resistance and into blue skies. We’ll look for a classic dip-and-rip scenario and turn our attention to the BA Weekly $352.50-360 Calls. 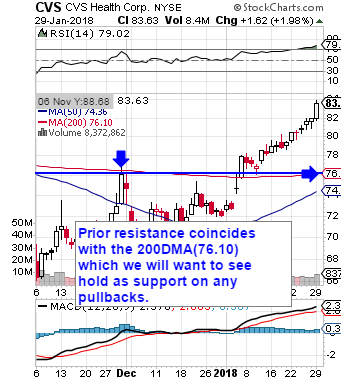 On Friday morning, we saw serious potential in the INTC options chain following the company’s earning beat. They posted solid figures, but some were concerned over the possible security flaws prsent in the company’s new chips. Those fears were shrugged off with ease, as the stock took off for what ultimately turned out to be an exceptionally bullish session.

The move INTC made allowed for the chance at some really nice intraday profits in each of the three contracts we designated in Friday morning’s report, the INTC Weekly $47.50-48.50 Calls.

We’re always looking for a good bottom play, and one may be getting ready to present itself in the near future on BLDP. We want to place the stock on intensive bottom-watch in coming sessions, after it appears that BLDP has been the target of manipulative short-seller tactics, including a very likely erroneous class action ‘investigation’ and suit by multiple law firms. We see this type of thing all the time, and very seldom does anything come of such a situation.

What we do have is a stock that has been severely abused, beaten back to a previous multiple bottom of strong support. In a PR published today, the company has refuted the claims of its accusers, while adding that it expects to report record financials for fiscal 2017 presently. (>>View PR)

We’ll be sure to monitor BLDP for a bottom bounce which should be forthcoming at any time, and the subsequent rebound to follow, which could bring us a shot at considerable gains from current levels.

Side Note: We also want to radar Plug Power, Inc. PLUG, as it tends to trade very similarly to BLDP. We’ve traditionally looked at these plays in tandem, so we’ll keep watch over PLUG as well as it comes down to find its own bottom.