Skip to content
With tomorrow’s holiday splitting another week right down the middle, we’d like to take this opportunity to wish our audience a very safe, healthy and Happy New Year. 2013 was an extremely successful year for us, and we are really excited to make 2014 even better!
At this point all of our regular readers are aware of our ongoing interest in marijuana -related stocks. We’ve covered this relatively new and rapidly growing industry tenaciously over the past year-and-a-half, and to our great pleasure, it has provided us with countless opportunities to profit.

CBIS is an old favorite of ours that has delivered the goods on several occasions. Most recently, following our latest report which included the stock (12/19), CBIS touched its 52-wk low at .028, and has been really heating up since that time, reaching a high of .04 yesterday, good for a rebound of 43%

The stock closed at the high-of-day on more than 5.5x its 3mo. average volume, which certainly qualifies CBIS as a potential momentum play.

Here are some of the other stocks we’ve been  continuously tracking in the cannabis industry:

We want to have the sector as a whole on watch as these plays are heating up, and seem poised to begin the New Year on a strong note. That fact, in concert with all of the recent progress that marijuana has made on both legislative and social levels, has us thinking that 2014 could be a landmark year for marijuana related stocks.

We also prepared a video chart presentation on the subject:

PROW is likely to remain on our radar and in our reports well into the New Year. 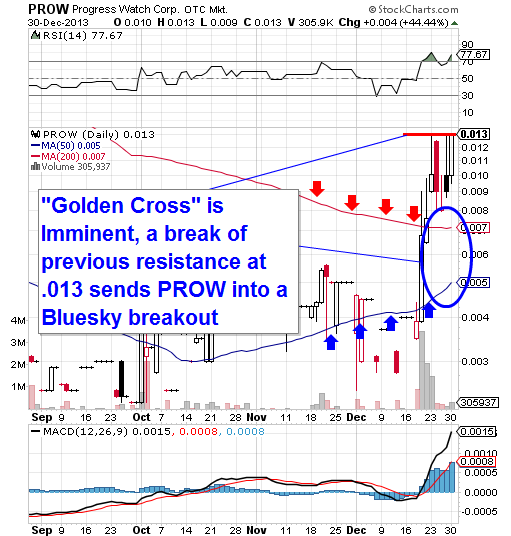 KNDI came off of yesterday’s morning report to have a solid session, so we wanted to congratulate anyone who was able to take advantage. The stock saw a daily low of 11.50, followed by the high at 12.79, marking an intraday gain of just over 11%  A pretty good move for a stock in that price range, and a nice addition to the significant gains we’ve already seen from KNDI.

This morning, we are revisiting a play that has been periodically appearing on our Extended Watchlists since this summer. Following a July 15th alert, we would see KNDI dip as low as 4.41 (07/23). We continued to monitor the stock through to September, as it went on to hit a high of 9.20 (10/26), marking an increase of 109% in roughly three month’s time. However, our adventures with KNDI had only just begun.

By early November, it had settled back to a low of 6.15, and it hasn’t looked back since. Moderate gains gave way to full-on breakout mode on Friday as the stock rocketed to a high of 10.4784, marking a gain of 70% off of its most recent low, and a 138% rise from our original alert low of 4.41. This huge move came just a few days after the following announcement:

This is definitely a story that we will continue to follow in the New Year, as the company expects to increase its delivery of electric vehicles. CEO Hu Xiaoming recently stated: “In 2014, we expect our EV business may surpass our legacy go-cart business and become a major revenue generator for the company,”

PPHM is an old-time favorite of ours that we wanted to call attention to this morning, as the stock is undergoing some notable pre-market trading action. From lows (1.25) following our most recent alert on PPHM is gapping up significantly, currently trading in the high 1.40’s on a PR fresh out this morning. We’re very interested to see how far the current trend will carry, so keep an eye peeled on PPHM.