Skip to content
Petroleo Brasiliero SA (Petrobras) PBR – Options
–
We were pleased with the potential for quick intraday gains provided by the PBR options chain on Friday. Our thoughts on moving up our strike price turned out to be warranted, as the $12.50 and $13 Weekly Calls we mentioned both did well on the day.In fact that $13’s actually made a heck on an intraday rip from .04 to more than .20.

We’re still optimistic that PBR stock can continue to recover (after recently hitting all-time lows) and even test the 14.50-15.70 range, filling its gap on the chart. The next major resistance hurdle appears to be the  200DMA at 13.88.

As for the contracts holding our attention moving forward, we’re still looking at the May $12 Calls (which we’ve already followed from a low of .31 to Fridays high of 1.10, +255%) and also considering the June $14 Calls which closed at .47 on Friday.

PSID is garnering our attention once again this morning. This was a winner for us when we re-alerted it back on Feb. 18th.  If you recall, the stock was trading at a low of .0572 at the time, and we’d follow it all the way up to a subsequent  high of .125. It then came back to find support off of the 200DMA in the mid-.06 range.

We observed a Golden Cross on the chart last week, a signal we are always looking out for, and an 8-K filed this morning only adds to our interest as we kick off another trading week.

It is in regard to a lucrative purchase order that the company has received from UTC Aerospace Systems, which will service the US Dept. of Defense contract for the JUPITR program (Joint United States Forces Korea Portal and Integrated Threat Recognition):
On March 28, 2014 PositiveID Corporation (the “Company” or “PositiveID”) entered into an agreement, in the form of a purchase order, from UTC Aerospace Systems (“UTAS”) to support a contract for the U.S. Department of Defense (“DoD”). This agreement is expected to be performed over the next seven months, between March and September, 2014. The terms of this fixed price agreement include a total value of $841,000 to PositiveID, paid in monthly installments over the next seven months.

This agreement will support the DoD Joint United States Forces Korea Portal and Integrated Threat Recognition (“JUPITR”) Program, which is intended to detect biological threats in order to protect our nation’s warfighters and allies. The JUPITR program will test and evaluate PositiveID’s biological detection and identification technology called M-BAND (Microfluidic Bioagent Autonomous Networked Detector). The assessment will baseline performance, reliability, maintainability, ease of use, and cost of operation to provide the “best of breed” and most affordable options for the U.S. Army and U.S. Air Force.

A copy of the agreement will be filed as an Exhibit to the Company’s Annual Report on Form 10-K for the year ended December 31, 2013. The description of certain terms of the agreement set forth herein do not purport to be complete and are qualified in their entirety by the provisions of that agreement.

On Friday we added SRNA to our marijuana related watchlist, and were glad to have done so. We learned that SRNA’s new CEO is a former co-founder of Zynga, and the news was well received.

We also learned that in addition to a group of new directors, Surna entered into an agreement which effectively gained the company 14 intellectual property patents related to indoor climate control systems for cannabis growing in states where it is legal.

Petroleo Brasiliero SA (Petrobras) PBR – Options
–
We first began tracking the PBR options chain one week ago today (03/21), and at that time, the May 2nd $12 Calls that we pointed out were trading as low as .31. With the exception of a marginal pullback on Wednesday, PBR has been in a recovery uptrend since recently touching its all-time lows, and that has allowed us to see some excellent gain opportunities. 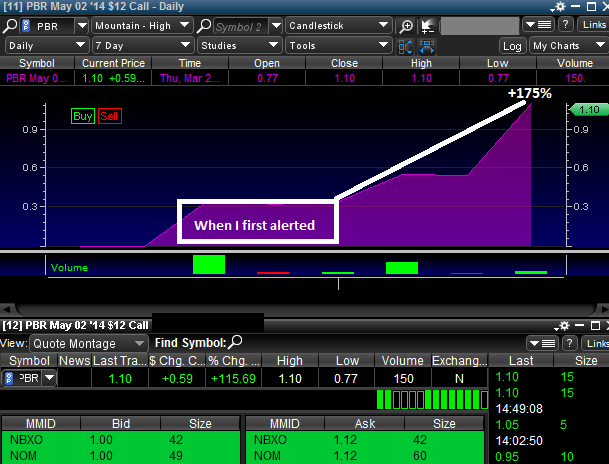 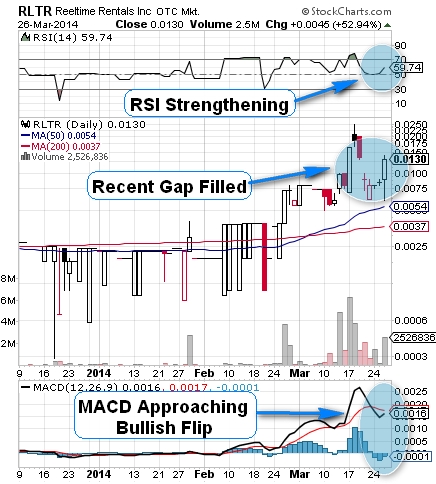