On our premarket watchlists for both Wednesday and yesterday morning, has been WATT, which received some exciting news this week.

The company revealed that the FCC has granted consumer safety certification for its wireless charging technology, marking the first FCC approval for remote wireless charging, and opening the door to commercialization.

Its applications are plentiful, and the potential is high, and it’s showing on the chart. On Wednesday morning following our alert, the stock was trading for as little as 15.30, and at its high of day yesterday, the stock had reached 33.50. That represented a two-session swing of 119% as it set new all-time highs for volume two days in a row.

We will be very interested to continue tracking the story behind this huge turn of events for WATT.

We also would like to recap HMNY’s performance yesterday. We tagged this one as a bottom play and ended up timing the bounce with absolute precision.

The stock had been in an overall downtrend since the end of November, and yesterday, began what could be just the start of a more sustained recovery.

HMNY traded up from a low of 5.45 and went on to reach a high of 6.98, for a modest but respectable increase of 28% on the day. It happened on roughly three times the monthly average volume, and closed near the high of day, so we’ll definitely be on the lookout for momentum carryover.

Just a quick reminder about the options idea we had for INSY recently. We already reported the solid gains we’ve witnessed in the INSY 01/19 $8 and $9 Calls on Wednesday morning, but given the current conditions on the chart, we’ll want to keep an eye peeled for further bullish activity in those contracts. 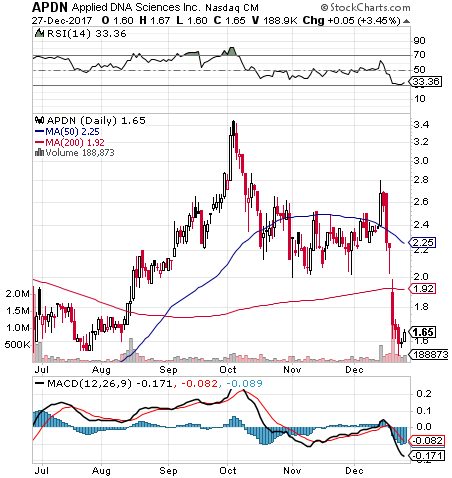