On Wednesday, we were mentioning ORRV, and how we’d seen it make a nice move after discussing it in our traders chat the day before. We hinted at the possibility of seeing further gains from this volatile mover, and yesterday provided a truly excellent opportunity to make some fast money, just as we’d hoped.

ORRV traded as low as .0005 in the morning before ripping its way to a daily high of .0022, which marks a single-session run of  340% so congratulations to anyone who noticed our alert and reaped the benefits.

Moving forward we’ll treat this play like any other that has been making solid strides to the upside, looking for it to maintain its uptrend with higher highs and higher lows.

NVidia Corp. NVDA – This has been 2016’s top performer on the S&P 500, and one that we’ve visited in our reports on occasion. Despite already being up over 200% on the year, we like the feel of the reversal that occurred yesterday after it previously had appeared that a downturn was setting up. Instead shares of NVDA pressed upward, and the stock is gapping up considerably in premarket trading today.

We’re going to focus upon the NVDA Weekly $112-115 Calls to try to turn a quick profit today.

Advanced Micro Devices, Inc. AMD – We also want to look at one of NVDA’s direct competitors, which has also been building momentum on the chart, in a general uptrend since the middle of October. Here we’re going to want to monitor the activity in the AMD Weekly $11-12 Calls.
_____

CAUTION: Never trade weekly options contracts on a Friday if you aren’t an expert trader. These are high-risk/high-reward style plays that are not for the faint of heart, or the inexperienced!

Trading in general was greatly subdued on Wednesday in comparison to Tuesday’s fast start to the short week, but MYDX was one of a couple significant movers among our mentions in yesterday’s report.

The stock traded in a range from .0036 up to .0064, which works out to an intraday push of 78% and it came on well over twice the monthly average volume.

Prior to this week, the stock had been consolidating heavily for quite a long period of time, and has now strung together two really solid sessions after registering a new 52-low on Tuesday morning. We’ll continue to monitor this play for the recording of higher highs and higher lows; another strong performance today would qualify it for full-on multi-day runner status.

Also coming off of yesterday’s report to have a respectable session was FTPM. This is one of the cannabis related plays that we tracked over huge gains back in October as the pre-election marijuana hype was reaching a fever pitch. With the sector seeing a comparatively mild yet still strong resurgence this week, FTPM is among those stocks reaping the short-term benefits.

We witnessed it run from a low of .0011 to .0019 yesterday on more than twice the average volume, which works out to an intraday pop of 72%  Like the aforementioned play, we’ll want to see the stock logging higher highs and higher lows for the remainder of the week.

It’s been roughly a month since we dabbled in any AEO options, and we wanted to formulate an idea this morning granted the fact that the AEO chart is presently at a bottom and beginning to look ripe for a recovery.

Accordingly, we’d like to signal a range of extended-term options contracts in the AEO chain to put on watch in the days and weeks ahead. Unlike last month, when we went bearish with some puts after a mixed earnings release, this time we’re going the other way with the AEO 01/27 $15.50-16.50 Calls. With just under a month until expiration, it gives the stock plenty of time to make its move, so we’ll be watching closely. 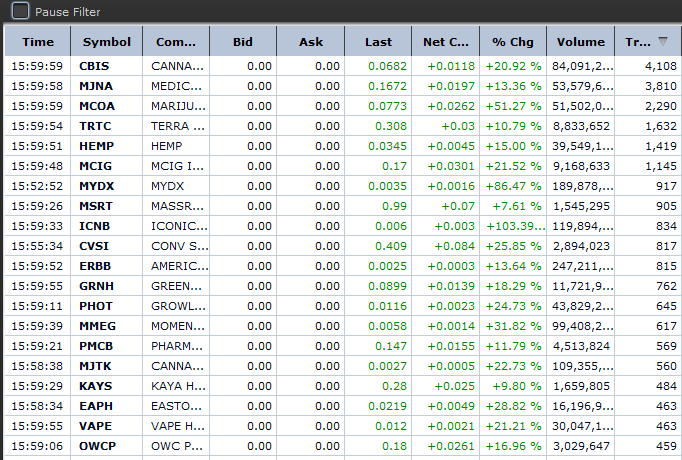