Oxygen Biotherapeutics, Inc. OXBT
–
After appearing on our extended watchlist yesterday morning, OXBT had a monster session. The stock was a juggernaut, rising all day from its low of 1.70, up as high as 2.87, good for an intraday gain of 69% on more than 48X 3mo. average volume.

This came on the heels of a press release, included below:

MORRISVILLE, N.C. & CHESTER, N.J.–(BUSINESS WIRE)–Phyxius Pharma, Inc. and Oxygen Biotherapeutics, Inc., (OXBT), today announced that researchers at the Duke Clinical Research Institute (DCRI), part of the Duke University School of Medicine, recently published findings of a meta-analysis of multiple clinical trials that evaluated the use of levosimendan in patients undergoing heart surgery. The study aggregated and analyzed results from 14 independent clinical trials with a total of 1,155 patients. The published results showed that levosimendan was associated with reduced mortality (death) and other adverse outcomes including heart attacks during and after operation in patients with reduced heart function undergoing heart surgery. >> FULL PR

We first alerted CETV back on May 10th, as popped up on one of our Form-4 scans. At the time, the stock was trading as low as 2.67, and saw subsequent high of 6.6497. A huge potential profit of 149%  Since then, the stock has never dipped below that 2.67 mark, until yesterday, when disappointing third quarter and nine month financials were announced, and CETV was subject to a large backslide.

On stocks that see a large gap down, tanking the way CETV did, we  watch closely for the establishment of a new base and following recovery. Especially when the sell-off seems to be a knee-jerk reaction to an earnings release. We won’t want to miss any potential rebound action on this one. 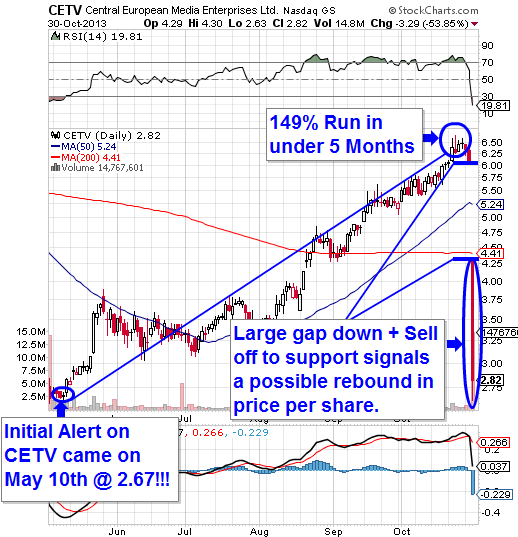 APP earned us an honorable mention in yesterday’s Penny Stock Rumble for putting in a solid performance. The stock did just what we had hoped, making higher highs and higher lows, and preserving the current uptrend off of its bottom. The daily range was from 1.34-1.52, an intraday move of roughly 13.5% on more than twice the 3mo. average volume.

As we stated yesterday, this stock has been on our holiday retail watchlist for years now, and 2013 is no exception. We’ll be very interested to follow the activity on APP over the next several months.

This is one we wanted to throw into the mix this morning after including on our watchlist yesterday. The company had some news out  that caught our attention, and chart looks like it has some potential as well. Volume has recently been picking up, and the MACD is flipping up to the bullish side. The RSI recently passed the 50-line as well. We’re keeping CYBK on watch for a possible move as we head into week’s end. 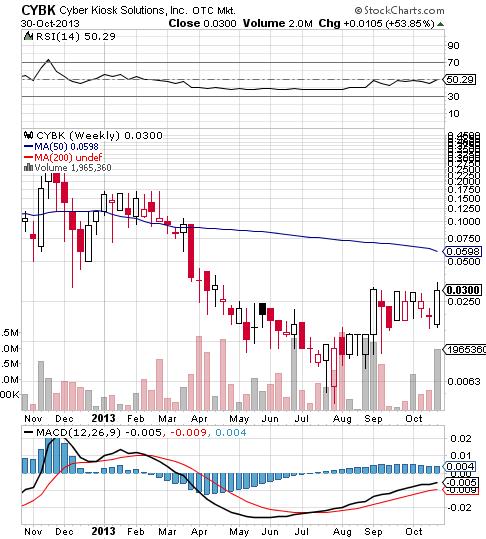 Orient Paper, Inc. ONP
–
ONP was a good pick from yesterday’s extended watchlist. We included it after after noticing that the stock was gapping up pre-market. It did so, and after touching a morning low of 2.15, we observed a move from ONP which took the price as high as 2.55. That was good for an intraday spike of 19%

This came on the heels of the company’s release of unaudited preliminary third quarter figures, which included 25% increases in both net income and earnings-per-share, and a 23.5% boost to gross profit. This is a steadily growing business that we will want to keep an eye on moving forward.

Another winner from the extended watchlist yesterday came in the form of NQ. The stock saw a daily range from 8.74 up to 12.18, and afforded us the opportunity at gains of up to 39% It seems we caught this play off of its bottom and mentioned it at just the right time.

As is generally the case when we come across such a play, today we’re on the lookout for the stock to post higher highs and higher lows to confirm an uptrend off of that bottom.

On October 8th, we mentioned that we were watching for a bottom on an old favorite of ours, APP. It had been steadily downtrending since the beginning of August, and it seemed like the right time to re-alert the stock. Just two days later, we saw that bottom, as APP touched 1.04. After waiting patiently for just a few weeks, it seems that APP has finally begun a reversal and is now headed up once again. Yesterday APP broke through a key resistance point, the 50DMA at 1.31, and several indicators are showing strength, including the MACD, which is currently diverging, and we have an RSI which is heading straight into the power zone.

The timing here couldn’t much better, as APP has been one of our favorite retail stocks heading into the holiday season for years now. For example, last year, the stock saw a move from .90-2.40 between the months of November and April. The year before, it was from the .50-range up to 1.20. We are excited to see where this year’s retail season takes APP, especially after catching it right off of its dead bottom. 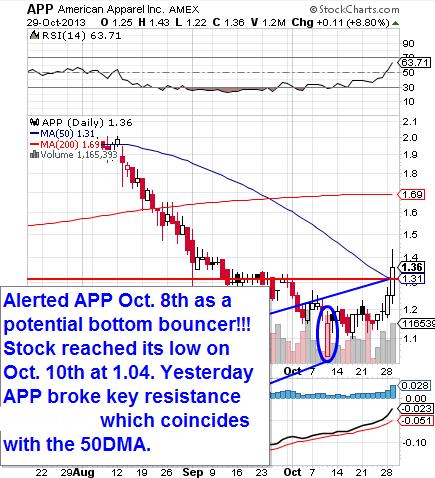 SKTO was one play from our marijuana watchlist to really have a bang-up session yesterday. On more than 5X the 3mo. average volume, the stock surged nearly 40% from its early morning low of .0135 to a late afternoon high at .0188.

The move not only broke through previous resistance at .015, but continued to roll, surpassing the current 200DMA (.016) as well. Moving forward, we’d ideally like to see support hold above .015. 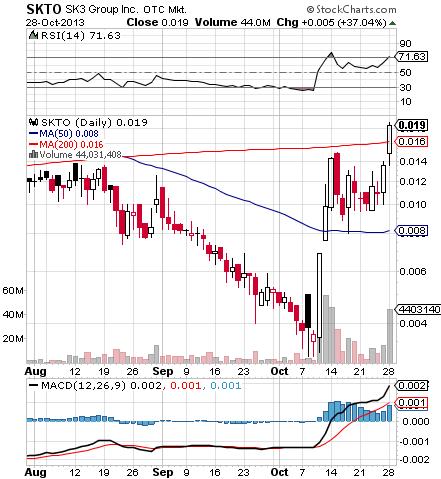 Apple’s quarterly earnings exceeded Wall Street’s expectations on Monday, fueling some extremely volatile post-market trading. After hours, we saw a significant pull-back followed by a bounce which has AAPL currently trading in the low 530’s. Yesterday afternoon’s high in the $542-range is going to act as the next resistance barrier.

We made the right choice with our last options call in moving our strike price up to $525, which as it now stands, should be pushed deep into the money with the current trend.