Our timing in alerting LFAP in yesterday’s premarket report honestly couldn’t have been any better. The stock had fallen to a new 52-week low in the previous session, and we caught it on our news scanner with a PR which highlighted the launch of the company’s Apple Healthkit-Enabled App For iOS.

The coincidence of those two events provided a springboard for the stock, which opened at its daily low of .0027 and served up the chance at a double-bagger as it surged 100% to .0054. That was followed by a short recession to .0035, and rebound back to a high of .0047, tacking on an extra 34% spike.

Cheers go out to any of our readers who were able to take advantage of this timely call!

GPRO turned out to be one of the better options trading calls we made this week. Yesterday we mentioned that as a result of a big gap up on earnings, we’d be on the lookout for potential plays in the range of Weekly $49-51.50 Calls.

The price action on GPRO as the stock predictably performed a dip-and-rip maneuver on the chart, provided a couple of swing opportunities in each set of contracts in our targeted range. For example:

Each set of contracts between those low and high ends of our selected range ($49.50, $50, $50.50, & $51’s) also served up opportunities with similar price action and possible gains for traders.

We picked up on a couple of stocks with fresh PRs out this morning that also happen to be coming up off of recent lows. As LFAP decisively proved yesterday, this has the potential to create the conditions necessary for rapid gains. We’ll have both of these on our radars as the session kicks off: 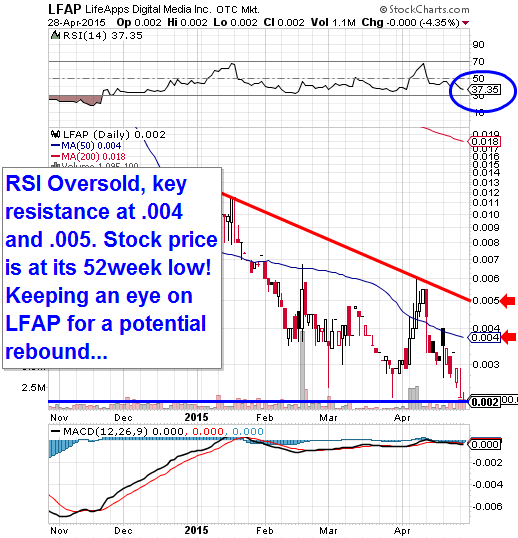 We once again found a way to leverage AAPL’s current uptrend to our advantage yesterday using the options chain. Just to refresh people’s memories, the idea we highlighted in our premarket report was to monitor Weekly Calls in the $130-132 range.

We also want to mention the performance of PZOO which surged to a new high of .0204 yesterday. In the video charts we’ve published on PZOO over the past couple of trading days, we mentioned that the 200DMA of .0204 should act as key resistance, and that’s where yesterday’s intraday run topped out. From a morning low of .0177, it marked a 15% jump.

From our observed low of .0049 on April 6th, PZOO’s new high marked an overall increase of 316% We stated this week that we want to see the stock maintain support in the channel between .011-.014, and that remains true today.

Any way you slice it, PZOO has performed admirably in the month of April.

Hitting our scanner this morning is a stock that has been in a steady downtrend for quite some time, which is gapping up in the premarket on the heels of an early PR linking the company to LG Electronics.

NLST has spent the better part of the last three months bottoming out, and the stock just set a new 52-week low yesterday. This is exactly the type of play that we like to monitor, as it gets kicked up off of annual lows.

Other Notable Gainers From Yesterday’s Watchlist

We’d also like to highlight two other plays that appeared in yesterday’s premarket report that provided opportunities for our readers.