MKHD was a stock that we had to tag yesterday after noticing the company’s big announcement on our premarket news scanner that it would be acquiring 100% of cyber-security firm Civenergy, Inc., which did $35M in revenues in 2013.

We were anxious to see how the news would affect this low-float stock, and on 9x the average volume, it traded in a range from .042-.085, an intraday spike equaling 102%

We’re going to leave this play on our watchlist, at least until we receive further updates on the acquisition.

MKHD is also receiving a rare “100% Buy” Rating at BARCHART.COM

Also among our interests from yesterday, and indeed the past couple of sessions, was TRTC. We re-flagged this play on Friday at a low of .25, and have witnessed a solid two-day uptrend since then. After seeing a low of .3060 yesterday, the stock would run into the close, ending the day at its high of .37.

That marked a 21% intraday gain, and an increase of 48% over our observed low on Friday.

DLIA is appearing this morning as a possible bottom-play. The stock is gapping up this morning, and there seems to be a gap to fill on the chart roughly to the 50DMA of .46. Per a PR out this morning, DLIA is “considering a possible sale, merger or ‘other form of business combination‘”, so this is another one that we want to continue to follow as a potential story plays out.

MKHD is one that we want to flag this morning after our news scanner picked up an intriguing PR that just hit the wires. Apparently the company has moved to acquire cyber-security firm Civergy, Inc, which apparently generated revenue in excess of $35M last year.

It’s going to be interesting to see how this stock, which is unaccustomed to heavy trading, responds to this significant development.

Among the cannabis plays that we were watching for a resurgence on Friday was TRTC, which put forth a significantly fruitful session as the stock came out of the gate at .25 and ran up as high as .33 on volume exceeding twice the 3-month average.

That move was good for intraday gains of up to 32% and marked the fourth consecutive day that TRTC registered both higher lows and higher highs. It leaves the stock firmly near the top of our marijuana watchlist which is certain to garner more attention as we approach voting season.

We also saw a nice pop out of RPRX, which appeared in Friday’s extended watchlist, and would go on to post a solid performance on the day. After trading as low as 9.23, we witnessed a run to 11.18, a bullish move of 21% on just a shade under four times its 3-month average volume.

It’s a good signal that after the recent beatdown of the stock from the $14+ range that we’re seeing a turnaround, so we’ll definitely have RPRX on our radar going forward.

The biggest standout of yesterday’s session was the unmistakable resurgence of the cannabis sector. Many of you will recall that we have tracked this sector throughout the year, and indeed, dating much further back than that. The gains we’ve seen from this market in 2014 have been nothing short of historical. Over the past few months, however, we had been witnessing a huge beatback sector-wide, with pot plays steadily declining across the board.

You can see below from the random chart examples we’ve pulled, that similar action has been occuring in most every related stock. Familiar plays like HEMP, TRTC, and GRNH all exhibit strikingly similar paths. Steady, heavy losses followed by distinct signs of a turnaround. 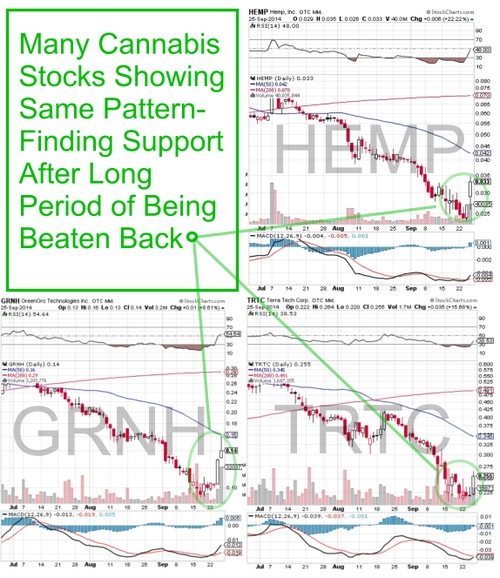 Presumably the pickup we’re seeing as we head into the end into week’s end is due at least in part to campaign season kicking off for proponents of cannabis in places like Alaska, Florida, Oregon and Washington, D.C, who will all be voting on marijuana initiatives in some form or other on November 4th.

Other states are sure to be paying attention, especially those that are tight on cash. Colorado estimates that tax revenues from its first year of recreational sales stand at $60-70M. Meanwhile, Washington State’s measure roll-out of retail sales continues slowly, with only the second Seattle marijuana outlet scheduled to open up next Tuesday.  In a study conducted by NerdWallet.com, the nationwide legalization of pot would produce over $3B annually.

So here we are, having waited patiently for the marijuana space to begin to heat up again, finally seeing the kind of rebound activity that can provide us with quick in-and-out gains. We’re going to want to watch anything even remotely tied to the industry as voting time draws even closer.