SING was an unbelievable gainer for us yesterday, so much so that we felt the need to send out an afternoon alert just to make sure everyone was paying attention. After briefly touching .0195 just after the open, the stock went into beast-mode and rampaged its way into the close at its high of day, .084, a 331% intraday move on roughly 12x its 3mo. average volume.

At the time of our afternoon update (2:30pm) the stock was trading at .044, so even those who missed the morning report could have still made gains of up to 91%

We want to point out another aspect of SING’s performance that serves as a good lesson: In yesterday morning’s report we stated: “Indeed we are seeing the gap-up that we expected, this morning pre-market trades have gone off as high as a nickel. After such a huge spike, we wouldn’t be looking to jump in head-first, as a dip-and-rip scenario is exceedingly common in these situations.”

We hope that many of you caught this tidbit, because SING then executed a textbook dip-and-rip, coming down off of a nickel to touch that low of day at .0195 before taking off into the stratosphere. Congratulations to anyone who adeptly played this monster of a play. It was a great way to kick off another exciting week of OTC trading.

Speaking of monster gainers, USEI is the other major reason why we hope folks caught our afternoon update yesterday. Our alert couldn’t have been timed much better; the stock was trading at .0027 when we published our report at 2:30pm, just before it would explode to hit a high of .0064 (A possible gain of 137%) and close just a couple of ticks below at .0062 on over 20x its average volume.

The stock traded roughly 80% of its 500M float, meaning the supply of freely-traded stock on the Street is dwindling, a scenario that could produce even more large gains as we go forward.

Remember, this company just announced its entry into the Cannabis Sector yesterday, so we’ll be monitoring this stock alongside all of the other pot plays we’ve been tracking.

AEGY was another one that appeared in yesterday’s reports and  afforded traders the chance at sizable profits, as it too played out a dip-and-rip from .0082 to .0119, a 45% move. The main difference between this and the aforementioned stocks, is that we have been following AEGY closely since the beginning last week, when the stock was trading at a low of .0036.

From our initial alert price, AEGY’s high yesterday represented a one-week increase of 231%

AEGY just underwent a Golden Cross on its chart, which will make it one story to follow closely as the week progresses. 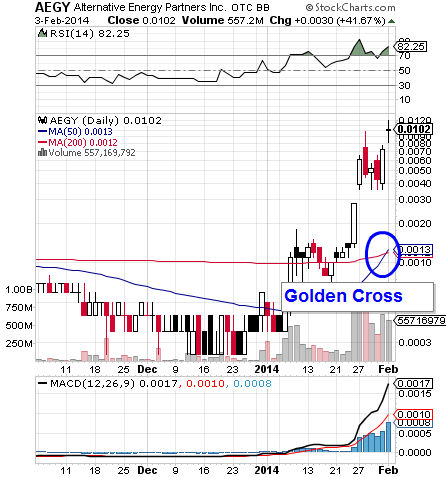 Our tenacity in covering one of the hottest stories of 2013 just won’t stop paying dividends, and all signs point to the sustaining of that trend in 2014.

Lately, some of you might have been wondering why we have been so keen to continue our focus on marijuana-related stocks (aside from the percentage gains they’ve already afforded us, collectively numbering in the thousands). You got your definitive answer yesterday, when 2014 trading kicked off, and the plethora of pot stocks we’ve been tracking proceeded to put some serious coin in our pockets!

While some newsletters have yet to even release their first picks of the new year, we are already tallying up a number of winning selections in this sector (and others). 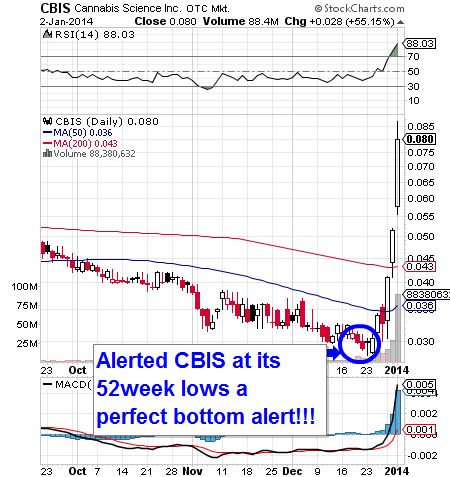 From a low of .045 to a high of .0795, GRNH put up an excellent session to follow our morning mention, giving traders the chance at a very respectable 77% gain. Back on November 18th, we bore witness to a .02-low on GRNH. From that level, yesterday’s high represents a increase of 298%

HEMP traded in a daily range from .02-.0318, offering us gains of up to 59% on the day. Like the previously mentioned plays, HEMP appears to want to gap up today. The momentum we’re observing in all of these stocks could take awhile to dry up.

Those were just the top gainers of the cannabis stocks we’ve been tracking, several others, including MDBX, ERBB, TRTC, FITX and more, also posted positive gains on the day, and will continue to remain on our watchlists moving forward.

Shifting gears from the marijuana stocks, we once again have PLUG. Following its appearance in yesterday’s newsletter (where we mentioned that this play had already made a move of over 1800% for us) PLUG would go on to have a bang-up first session of the year, dipping to a low of 1.89 before running up to 2.33, and giving us added gains to the tune of 23% The stock closed at the high of day, and as is always the case when that happens, we are on a sharp lookout for continued momentum. It appears that’s just what we’re going to get, as the stock is already trading up in the 2.50-range this morning on relatively heavy premarket volume.