PBMD stood out among yesterday’s fresh news plays with a solid performance on the day. It was helped along by the announcement that the European Medicines Agency had given positive Scientific Advice with regard to the development path for its metastatic breast cancer treatment.

We observed as the stock traded in a daily range from 1.42 to 1.78, representing a respectable 25% intraday swing, and it did so on the strength of nearly 3.5X its 3-month average volume.

Looking at some of the still-bullish features PBMD chart, we’re going to stay open to the possibility of seeing further upswings in the near future: 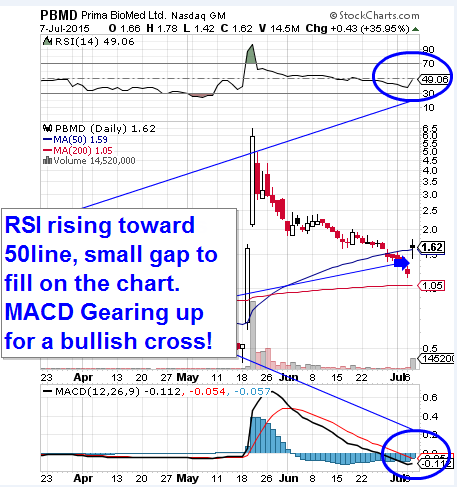 We highlighted ERBB on Friday as a potential bottom-watch candidate, and the stock has responded with a nice move so far this week. It was trading at a low of .0039 to start things off on Monday, and yesterday we watched as it reached a .0049 high; a two-day swing of 26%

The company just completed an important step in their current business plan which was reported in a PR yesterday (link below). It was in reference to the partnership ERBB has formed to construct a legal marijuana grow operation in Colorado, which will purportedly focus solely upon the propagation of “CBD-rich cannabis strains”. It’s a story we’ll continue to follow as more details become available. 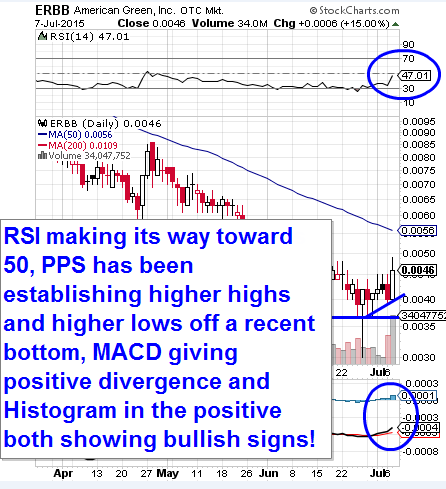 We’re also still on alert with regard to an inclusion in Monday’s premarket report; ASTI has been making its way toward a bottom for the past few months. Yesterday we observed a low .451 toward the end of the session, and it appears that will be marked down as the the rebound point as the stock is gapping up heavily in early trading today with the help of a very positive PR.

As of this morning’s premarket high of .80 we’ve already seen a 77% swing in less than 24 hours. We’ll keep a close watch on ASTI today as this morning’s news of its 233% quarter-over-quarter revenue increase filters down and reaches more sets of eyes.

We’re mentioning NUGN for the first time this morning on the heels of some interesting events that have recently unfolded. The stock had been on a sustained uptrend for over two months that was apparently the product of a massive promotion (in which we played no role) which resulted in the PPS running from below $2 to more than $4.

On Wednesday, the company issued a public statement to clarify that it was not involved in promotional activities of any sort >>Read PR

What followed yesterday was a massive sell-off to the tune of nearly 40%, and that’s where we enter the picture. Regardless of the catalysts behind NUGN’s gradual rise and rapid fall, we’re only interested in the chart activity that will follow. We’re going to highlight NUGN as a bottom-watch play, because the resultant bounce when the stock finds a solid level of support could make quick-strike gains a snap for those paying close enough attention.

We’re going to tag both of the following for observation today after each published notable premarket PR’s this morning:

In addition to announcing the latest in a long string of recently secured purchase agreements (links below), the AMMX chart is looking rather bullish at the moment. 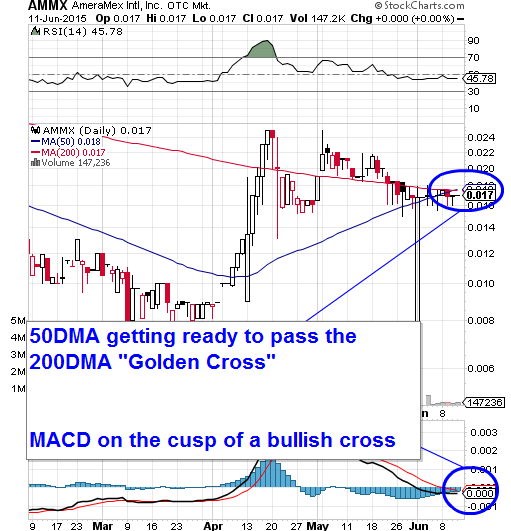 We’ll also keep an eye on CRBP, which has some FDA-related news out today.

Twitter, Inc. TWTR is responding well in the wake of the revelation that its current CEO will be stepping down on July 1st. We’re going to put TWTR Weekly $36-38 Calls on watch today as well, for potential daytrading opportunities.

SOPW is the first of a couple of news plays that we’re going to be taking a look at this morning. The company has announced the initiation of a 6-month long share repurchase program wherein it will obtain up to $50M of its common stock from the open market.

Xiaofeng Peng, Chairman of SPI stated, “The implementation of our share repurchase program reflects the confidence that our Board and management have in SPI’s growth prospects and our commitment to enhance value for our shareholders while retaining adequate flexibility for future growth.” >>> READ FULL PR

In addition to the favorable PR that, in and of itself would be enough to gain our attention, SOPW has also been searching for a bottom over the past few weeks, and we’ll want to be hanging around when it finds one, as the subsequent rebound could be considerable. 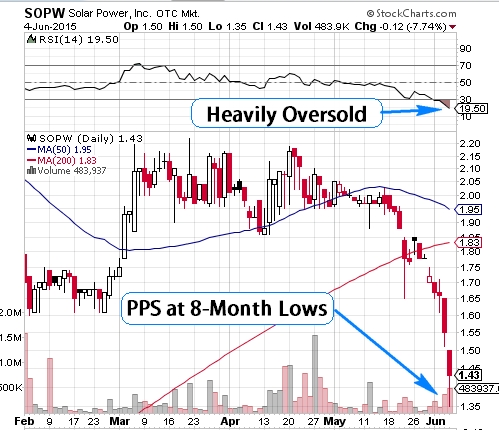 PTN has capitalized on the FDA’s recommendation for the first ever treatment for a disorder that affects the female sex drive. The company itself has a similar treatment that is currently enrolling women for Phase-3 trials.

As a result of this heightened attention, this morning, the stock is gapping up over 50% in the premarket. We’re going to tag it for observation, because the potential for a dip-and-rip in situations like these is ever-present.

Our LNKD Weekly Options Calls that we brought into the mix on Wednesday continued to pay dividends for the second consecutive session yesterday. We wanted to give a quick update on the ranges and total gains that have been possible with those contracts over a two-day span:

We want to extend our congratulations to anyone who joined us in taking advantage of the trend in LNKD this week. It wasn’t the first time we’ve made successful options calls on this stock, and it probably won’t be the last.