We first caught CETV off of one of our From-4 scans back on May 10th. Time Warner had just purchased a block of shares worth close to $75M, and it caused us to take notice of the stock. At the time, we observed trades as low as 2.67.

Shortly thereafter the stock would be subject to a big gap-down, and would continue to pull back to its current price in the low 2.00-range. The chart indicates that CETV is extremely oversold, and it has made higher lows over the past few sessions as it attempts to reverse its course. We want to keep our eyes peeled to this one, because conditions seem to be ripening for what could be a heck of a rebound. 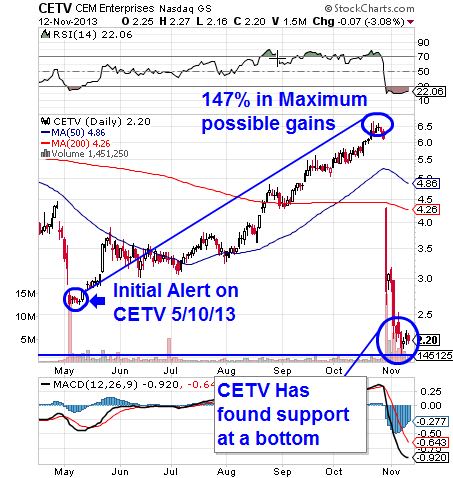 VNDA was a momentum play that we caught and included in yesterday’s extended watchlist. The company currently has a NDA (new drug application) filed with the FDA that treats chronic circadian arrhythmia.

PHOT continues to be among our favorite medical/legal marijuana stocks, a play that we’ve followed for well over a year. Beginning at the end of August, trading at .0318, we realerted PHOT and began talking about it more and more.  We posted another reminder on the 16th of September, and once again on October 22nd, when we mentioned that a golden cross on the chart was imminent. 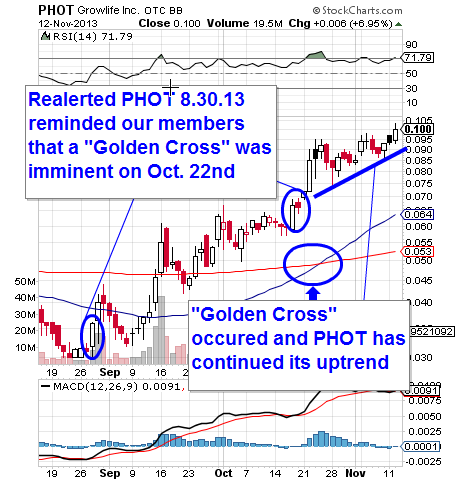 Wild Craze, Inc.  WILD
WILD continues to earn itself top billing in our morning reports with its performance. Since we first mentioned the stock on Thursday,we’ve seen an impressive range from a low of .35 to yesterday’s high of .565, a 61% increase. From yesterday’s low alone (.41), traders could have seen gains of up to 38%  Our call earned us an honorable mention on yesterday’s Penny Stock Rumble for high volume.

The stock broke through its previous resistance and closed on a bullish note, just a few ticks below the high-of-day. As you can see on the chart, several factors seem to indicate a stock that still has some room to grow.

Yesterday we stated that we were looking for higher lows and highers highs to remain interested in this play. That’s just what we got, and we’ll be on the lookout for the same thing today. The next key areas of resistance are pointed out below, with the most immediate obstacle at .64. 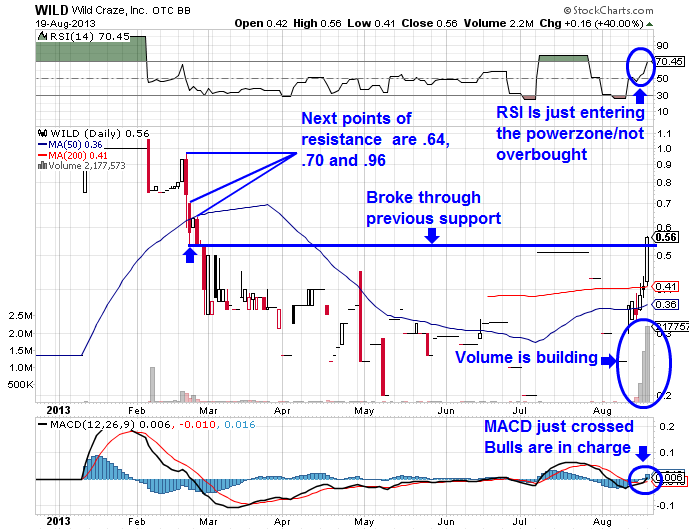 We had a pair of winners on yesterday’s Extended Watchlist as well, in the form of EFUT and ALVR.

EFUT ran fast out of the gate, and quick-witted traders could have been in at 4.15 and out at the subsequent 6.00-high for gains of up to 45%

ALVR made an even more impressive move, running 87% intraday from an early morning low of .7311 to the high of 1.37 just prior to lunchtime.

– Best Buy (BBY) released earnings that exceeded expectations on the Street and is in the process of a pre-market gap-up. As a result, we’ll be monitoring the in-the-money Calls on BBY during today’s session with a strike price at $33.50 and below.

– We’re also still looking at VCLK to continue to recover from a poor earnings report, as we mentioned the $24 09/21 Calls yesterday. These are not especially time sensitive, with an expiration date late next month, so this is more of a longer-term interest that we will be following in the coming weeks.

ALAS International Holdings, Inc. VDSC
Last week, despite being shortened by a holiday, turned up some solid performers for us. VDSC had quite a day on Friday following our pre-market mention of the stock. We outlined the fact that it had just recently found support off of the previous 200DMA of .004, and that the chart appeared ready to yield some gains. Indeed, from a low of .0068, we observed a subsequent high of .0098, making intraday gains of up to 44% possible.

The stock broke through a previous resistance point at .0093, which we’d like to see hold as future support, and beyond that the next key resistance sits at .017. VDSC ended up closing very near its high of day, generally a bullish sign.

Options Trading
SPY Calls were a point of focus for us on Friday. After a huge gap-up, we saw an early consolidation that led to a dip-and-rip scenario. The recovery carried the SPY to new highs, meaning that any Calls that were in the money provided traders with a really nice opportunity for some big gains. Specifically, the $161 Calls pushed as high as 2.05 into the close from a low of .66, and kept moving post-market as high as 2.19, a 230% spike.

SPECIAL REMINDER:
Don’t miss out on tomorrow morning’s report that will feature a brand-new stock that we feel has serious upside-potential coming off of its 52-week low. So be sure to scan your inboxes tomorrow morning before the opening bell and catch that report!