We had our eyes on a handful of options trading possibilities on Friday, and we did see some significant moves to the upside emerge from that group. We’ll kick things off this week by outlining some of the opportunities that were available for traders within the price ranges we specified in Friday’s report:

It’s quite the task for anyone to provide just one worthwhile options-trading idea, and on Friday, we were three for three. It serves as a great example of why we like to mix plenty of these options ideas into our daily reports; the gains are out there, ripe for the taking!

Our attention was drawn to ADMD this morning as it popped up on our news scanner; the company has come forth with information regarding an “error in the calculation of common shares that should have properly been issued, resulting in significant excess issuances of common stock”. It essentially boils down to an estimated positive impact of $0.8M on ADMD’s balance sheet.

We naturally took a look at the ADMD chart upon taking notice of this news, and as we point out with the annotations below, there are several indications of a bullish trend in effect. As a result, we’ll want to keep watch over ADMD as we begin this new trading week. 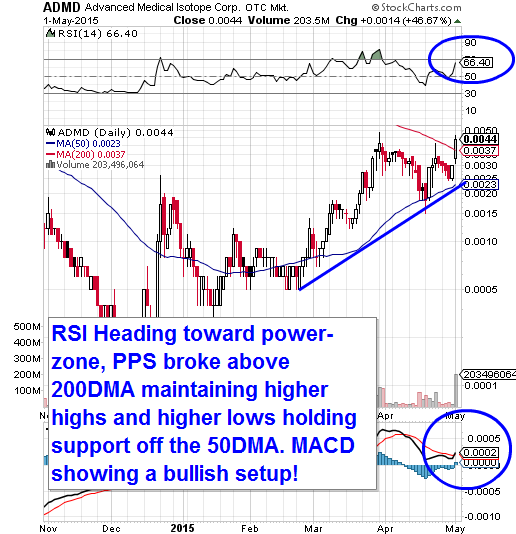 LinkedIn Corp. LNKD and Twitter, Inc. TWTR were both crushed on disappointing earnings last week, and both stocks appear to be gearing up for a possible recovery this week. They’re both slightly in the green here in the premarket this morning, and we’ll be looking for potential swing trade opportunities that might present themselves in coming weeks with Calls bearing a 05/29 expiration date.

On LinkedIn Corp. LNKD we’ll be monitoring the 05/29 $200-210 Call range. The longer period before expiration gives the stock some time to sustain a comeback off of recent lows.

Popping up on our scanner this morning is SITO, which, per a premarket PR (excerpt below) released this morning, has entered into an asset purchase agreement with Hipcricket (HIPP).

Upon approval, this deal will create in SITO, one of the largest mobile ad/marketing firms in the industry. This also comes in the wake of what has apparently been a good year for the company. According to SITO’s CEO, 2014 was “a transformative year… which included 27% year-over-year revenue growth”.

These are all reasons why the fact that we’re catching SITO coming off of its 52-low could carry some potentially exciting opportunities on the chart. We’ll have our eyes peeled for further updates on the progress of the deal as we tag SITO for monitoring in the days and weeks ahead.

Speaking of plays coming up off of their annual lows, MDCN represented a feat of perfect timing for us yesterday. We noted that the stock had reached its lowest point of the past year on Thursday, and the rebound offered up the chance at a 57% intraday move to kick off yesterday’s trading session.

Beginning from an early low of .023, the stock surged as high as .036 around 11am, with the bulk of the day’s volume (which exceeded the monthly average by threefold) having traded in that time frame.

Congrats go out to any of our readers who were able to reap a profit off of that excellently-timed call of MDCN!

We’re interested to follow the main MDCN storyline, being the recently announced purchase of a 7200sq.ft. commercial facility and dispensary in Phoenix, AZ. We’ll be certain to relay any developments as they come down the pipe.

NFLX continues to surge on yesterday’s after-hours earnings beat in this morning’s premarket activity, and it sets us up nicely for a possible play on some options calls.

What we’d expect to see is some early profit-taking, causing a classic dip-and-rip, and thereafter we’ll be looking to take advantage. Provided the stock holds support above today’s premarket low of 394.80 we’ll be paying close attention to the  $395-410 Calls for possible intraday/intraweek flip opportunities.

Side Note: GPRO is also bouncing off a recent bottom, and has our attention as a solid recovery play, therefore we will want to radar call options there as well.

Continuing the pattern of tracking bottom-plays that we’ve established this week, we have another potential play to add to the mix this morning with CACH.

We noticed this one on our premarket scanner this morning, and after glancing at the chart we can see potential for a possible dead-cat bounce. The stock has recently been beaten back to a new 52-week low at .22, and is rebounding back to the mid-.30’s in this morning’s premarket trading. We’ll have an eye on it for at least the remainder of the week.

CACHÉ, Inc. (CACH), a national multi- channel specialty retailer of women’s apparel and accessories, today announced that the Company has received an inquiry from a third party regarding a potential sale of the Company >> Full PR

Our long-time subscribers will certainly recall our monstrously-successful interactions with PLUG in the past, but for those who are newer to our reports, a quick refresh- we tagged plug initially back on February 28th, 2013 at a price of .135, and over a 13-month period followed it all the way to a high of 11.72 (this March); an eye-popping increase totaling 8,581%

Currently, PLUG is trading near the $4-mark in this morning’s premarket, and there is a gap on the chart from roughly 4.50-5.00. If the stock can break its 50DMA at 4.36 on the strength of a significant PR this morning, we could see a gap-fill.

On the whole, the stock is trading at a relative bottom, and with a number of factors looking favorable (including this morning’s announcement of a contract worth upwards of $20M), we like the chances of seeing some opportunities come our way.

The severe beating currently being administered to the fossil fuel markets makes now as good a time as any to look at alternative energy plays like this one, as well as others we’ve previously tracked within the sector, such as BDLP and FCEL.