We’re circling back around to CURR for a few different reasons today. Firstly, the company was featured in an article yesterday on Seeking Alpha that identified it as one of the 20 most undervalued stocks with ties to the cannabis sector. (>>View Article)

Additionally, whenever we are tracking a particular company and notice the submission of a Form-4 (insider buying) we always take note, and one came in yesterday. CEO Robert Davidson increased his position, which you can verify by perusing the form. (>>View Form-4)

Lastly, as were recently mentioning about CURR in a previous report, the company held a Zoom webcast last Thursday pertaining to its current strategic positioning and direction. You can now view the entirety of the presentation without registering, on YouTube, and we would suggest that our readers do just that at their first opportunity. (>>View CURR Webcast – Total Runtime, 35:38)
______

Please direct any investor inquiries on CURR to:

All of our options ideas from yesterday morning’s premarket report immediately bore fruit. We timed the bottom bounce on SWI perfectly as the stock ran 13% from 14.975-16.94, made a timely earnings play on NKE, and bet that the SPY, which was falling in the premarket, would rebound. The markets predictably dipped and ripped, and helped to provide all of the following intraday gain opportunities:

In the case of the SPY and SWI, which are both gapping up big here in the premarket, we would expect to see our observed ranges and potential gains increase today.

After watching it run more than 2000% several weeks ago, we began tracking AMLH’s subsequent consolidation and rebound, and the results have been quite pleasing to this point. On Thursday morning, we recapped the stock’s progress to that point as it bounced and ran from .0029-.007 (141%). We also said we’d be on the lookout for the stock to break that resistance at .007, and on Friday, that’s just what it did.

Our regular readers will recall that AMLH started out as a call from our daily live trader’s chatroom on March 27th*, and from the low we witnessed at that time (.0003) this stock has posted an astonishing 3000% upswing!

*As always, we invite any of our readers to participate and/or observe our live in-session trader’s chats via Skype. Simply send a contact request to username “stocksumo” to get involved!

We noticed that not only is DISH looking relatively toppy on the chart at the moment, as you can see on the snapshot below, but this morning the company also had a rather ugly earnings release. It included declines in revenue and profits,not to mention more subscriber loss.

We don’t often jump to the bearish side of the fence with our ideas, but in this case it seems appropriate. We’re going to have the DISH 05/12 $62-60 Puts on our radar to take advantage of what could be a significant backslide over the next several sessions. 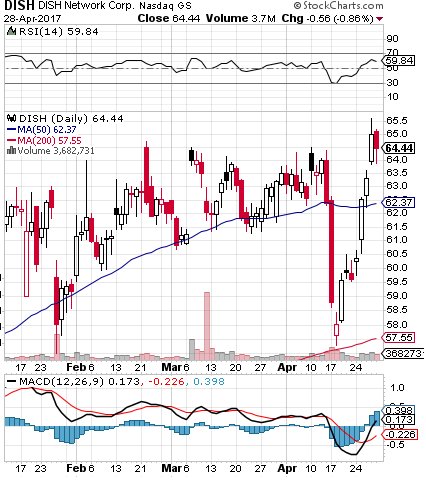 We want to put this pair of finance plays on watch after noticing that both stocks have been beaten back quite a bit over a relatively short period of time.

In the case of OCN, the stock is massively oversold after falling off a cliff a couple of weeks ago, but began to bounce last week, and is gapping up significantly in the premarket.

FNBC is actually gapping down heavily (roughly 90%) in the premarket, so we’ll have to monitor this one for its bottom, but after it’s reached we could in in for a heck of a bounce here as well.

Our first order of business in today’s options-heavy report is to go over the second straight session of excellent intraday runs TWTR Weekly $15-16 Calls which we designated as targets in Wednesday morning’s premarket report.

This midweek, Twitter had posted losses that were less than expected in conjunction with rising user numbers. It has provided us with some really good opportunities, which were as follows:

At this point these contracts owe us nothing. Granted that these are weeklies and it’s Friday, coupled with the fact that the stock has rushed into heavily overbought territory in just a short time, we’re fine moving on to the next thing which we’ll get to in a moment.

First we want to go over our UPS options idea that we formulated fresh for yesterday’s premarket report. This was another earnings-related idea, as a great deal of our options calls tend to be, and it worked like an absolute charm.

We signaled the UPS 05/05 $108-111 Calls and every single contract in that range produced chances for spectacular multi-bag gains on the day, with the $111’s stealing the show on a seven-bagger!

These plays, we can leave on our radars as they don’t expire until the end of next week. If UPS manages to convincingly crack through the 200DMA at 109.00, things could get very interesting.

As for the play that’s catching our attention on this morning’s scan, we’ve got yet another post-earnings target with WDC. The stock has been trading in an upward channel for the better part of a year now, and the company just put out a solid beat for Q3 while issuing a bolstered Q4 outlook.

We’ll try to take advantage of the commotion it’s causing on the chart with the WDC Weekly $90-92.50 Calls, but please remember the warning we always give in these situations: Never attempt to trade weekly options on a Friday unless you are a highly experienced trader- it’s an exceedingly risky proposition.