We placed some BYND calls on watch in yesterday morning’s premarket report, and we saw instant potential returns of a significant nature.

Our targeted range was the BYND Weekly $122-125 Calls, and all four of the contract sets in question produced single session multi-bag moves.

BYND stock is nearing an area of previous resistance on the chart, but we’ll be monitoring for a possible breakout which would obviously facilitate even more gains in these contracts.

We’ve also been tracking a longer-term set of options ideas for the TWTR chain for a month now, initially offering up the TWTR 02/28 $36-37 Calls last month on the 21st. We saw some nice multi-bag gains out of those, which we reported to our readers a couple of weeks back on the 7th.

Since then, we’ve seen yet another run out of those plays, which we’ll pass along now. Here are the gains that have been possible with these ideas within the last several sessions since our most recent update:

We offered up a longer-term options idea on Twitter roughly two-and-a-half weeks ago, highlighting the TWTR 02/28 $36-37 Calls last month on the 21st. We’ve gotten some good results from those so far, thanks to yesterday’s positive earnings, so we wanted to start off by reporting those gains. We’ve also had good success from our TSLA and EL ideas from yesterday, as well as being all over the SPY this week.

We want to watch NINE which is giving off a multiple bottom bounce signal, for a possible recovery in coming weeks. We’ll be looking at the stock itself, which as you can see form the chart below, could easily rack up 50-100% in gains with a nice rebound, as well as tracking the NINE 03/20 $5 Calls. 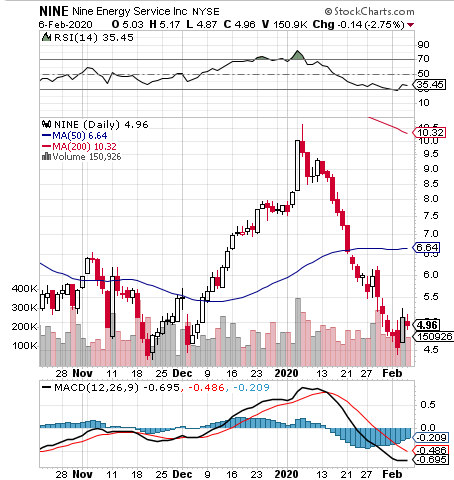 To kick off this short trading week, we are going to jump right back into the mix with a trio of options ideas for our readers. We’ve already seen the major options success which has become characteristic for us, in 2020 so far. We’ll try to keep things rolling today with these new items of interest:

Alibaba Group Holding Ltd. BABA – Despite BABA having been on a bull run for several months, BABA is slipping in the premarket this morning, and while it may only be a temporary aberration to its overall trend, we are going to signal some weekly Puts for observation in the near term. Those will be the BABA Weekly $230-225 Puts.

Twitter Inc. TWTR – Also on a months long run, TWTR has been moving to fill a massive topside gap on the chart in recent sessions, and we are going to be tracking both a short and longer term idea for this chain. Our targets here will be the TWTR Weekly $34.34-50 Calls & 02/28 $36-37 Calls.

Virgin Galactic Holdings, Inc. SPCE – We’re also interested in tracking an idea from a stock in the current ‘billionaire space race’. Let’s put the SPCE 02/21 $10-15 Calls on the radar to watch in the days and weeks ahead.

Most of our work these days pertains to big board stocks and options, but we do still scan for OTC opportunities like CRSM.

This is a penny stock which began to show signs of a bottom bounce last week. We’re going to track CRSM over coming sessions too see if it can establish more of a sustained run.