RSH found new highs early in the session after we tagged it in yesterday morning’s extended watchlist. Word got around that RSH was reportedly offered a $500M bankruptcy loan, and it sent the stock quickly from a low of .43 to .55 which registers as a 28% intraday rip.

That marks the second time in the past several months that we caught RSH coming off of a new 52-week low and were afforded a rapid gain opportunity as a result. The last time was back in August when we tracked the play from its then annual low of .55 all the way up to the 1.60-area.

As of the end of 2014, the company was only short roughly $40M of the $100M in cash/credit needed to avoid having its long-term finance nixed, so this loan could certainly alter circumstances. We’ll be paying close attention for updates on whether the terms will be accepted by RSH.

We wanted to do a quick update on DKTS this morning; the company came with some late morning news yesterday regarding the updated status of its recently announced teaming with Big Tent Media. Apparently Big Tent has already found a suitable partnership for DKTS with regard to the public release of its upcoming beverage line; Konvict Records, which was co-founded by well-known R&B singer Akon.

The marketing power of celebrity endorsement has been demonstrated time and time again, particularly in the premium spirits industry. Countless celebrities have successfully launched branded beverages, and DKTS hopes to capture the same sort of recognition for its brands. It’s a story to which we are definitely interested in staying closely tuned.

You can follow the link below to the corresponding PR, but first we’ve prepared a followup video on the DKTS Chart, click below to check it out: 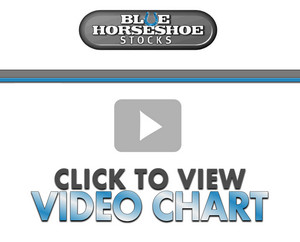 FRO has definitely turned out to be one of our biggest success stories of the past several weeks. Just to refresh people’s memories, we caught this play coming off of some of its lowest prices of the year back on December 1st. Our observed low on FRO was 1.33 at that time, and in two huge upward moves the stock has traversed quite a bit of territory since then.

Yesterday FRO achieved a high of 5.05, which marks a total increase of 280% in just under six weeks! As we did after the initial push, we could now see a possible dip-and-rip scenario. We’ll remain interested provided the stock maintains support at or above the $3-area on the pullback. 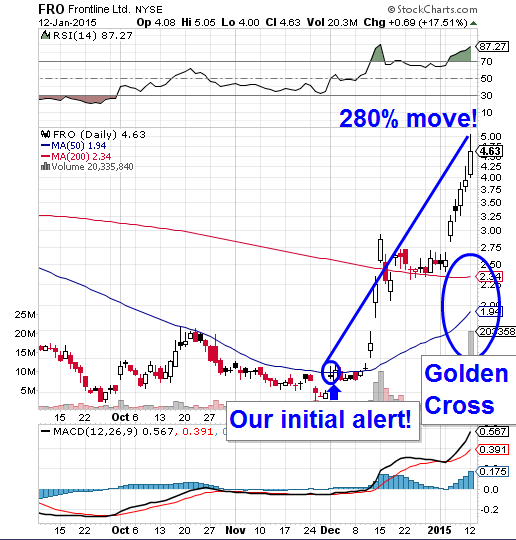 As we can see on the chart above, there is a potential Golden Cross in the making, and with tens of millions of barrels of crude to be held on tankers over the next few months given the current oil landscape, this may not be the last time we point to big moves from FRO.

Following up on one of the options ideas we were mulling over on TWTR last week; the TWTR February $40 Calls. When we first mentioned them last Wednesday (Saw a low of 2.15), we mentioned that they “could be in line for significant gains if TWTR continues to recover off of recent lows” and we did in fact see some substantial movement.

Those Feb. $40’s hit a high of 3.70 during the day yesterday, for an overall increase of 72% in a span of just four sessions! Even further gains could be forthcoming provided TWTR continues the current trend, so we’ll want to reserve it a slot on our watchlist as we head into mid-week.

RSH has made regular appearances in our reports over the past couple of months, starting in the beginning of August, when we caught the stock off of its 52-week low of .55.

Following a major run-up to the 1.60-range on August 29th, the stock has been under a general consolidation amid bankruptcy rumors. This week, the company was hinting at possible refinancing deal that would allow them to avoid that situation for the time being, and this morning, that deal was confirmed.

As a result, the stock is up significantly today, having traded as high 1.65 in the premarket. We’re going to want to see support hold at previous resistance points at 1.15 and 1.30. Already, at today’s early highs, we’re seeing more than a 100% increase off of the lows we observed following our most recent RSH alert (.80) 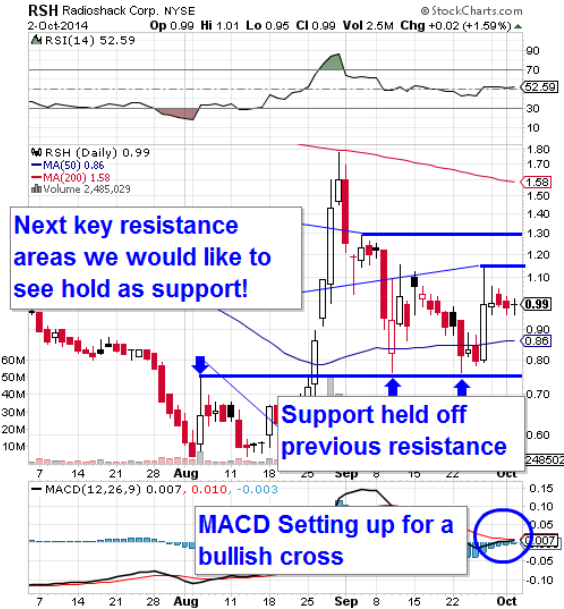 RMTI is another morning gapper that we’re going to place on watch today. With the stock coming off of a recent bottom, it’s going to be interesting to see how today’s development affects its price action.

The company put out a hefty PR this morning regarding a commercialization/distribution deal with Baxter Healthcare (BAX):

BCRX appeared on Wednesday in our extended watchlist, and what has followed has been two fruitful sessions in a row. From a low of 9.89 on Wednesday, we witnessed as the stock bulled its way into yesterday’s close, reaching a daily high of 11.49, a solid 16% overnight increase.

Speaking of pharma plays, INO, a stock that has appeared several times in our reports recently, is also making moves concurrently with the present concern over the Ebola virus outbreak. The company actually has a Ebola vaccine with which they’ve reported success in treating animals with the deadly virus. Anything to do with Ebola is getting a lot of attention at present, and INO is no exception.

Jobs numbers were out this morning, to a positive reception. We will subsequently be looking for dip-and-rip opportunities with regard to options trading. Friday is characteristically a day when premiums start to come down as a result of time decay, with expirations looming. We’re looking at potential opportunities trading Calls in plays like SPY, AA, ISRG, & GPRO.