While we are in a bit of a drought in terms of big name earnings reports, as tends to happen around a holiday. We’re back for a full, fresh trading week and we thought we’d shift our focus to bottom plays as we kick things off.

TRNX is in precisely the sort of position in which we look for bottom-bounce candidates. The stock saw new lows last week before making its reversal, and stringing together three consecutive positive sessions.

We can also see on the RSI that TRNX is just now coming off of being extremely oversold and the volatility potential suggests that even a 100% move from current pricing would not be out of the realm of possibility. We’ll be keeping an eye peeled here in the days and weeks ahead. 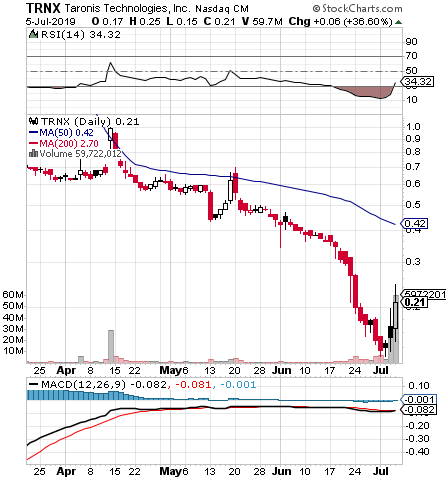 RMTI is another possible bottom play with some decent potential and a gap to fill the 200DMA currently sitting at 4.11. Perhaps the upside potential here is not quite of the magnitude of the previously mentioned play, but the indicators may be more ripe in this case.

The MACD is on the precipice of a bullish cross, and the RSI is slowly attempting to come off of being oversold. This may also be a good candidate for a more sustained recovery over the next several sessions. 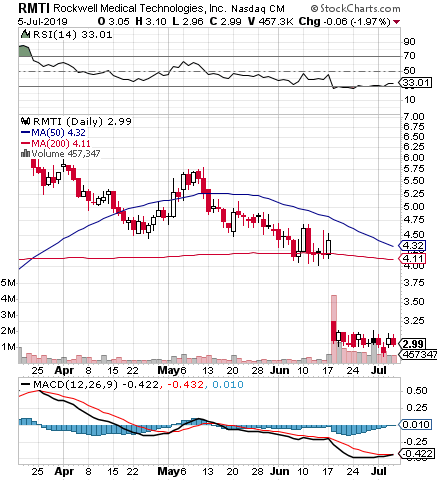 Despite what appears to be a significant downturn looming this morning, the markets as a whole posted a solid bullish session on Friday, and that helped one stock we’ve been tracking in recent weeks to record a new high for us.

We tagged MAXR for observation in mid-March, and before the end of the month, it had consolidated down to a low of 3.83. The month of April brought a fairly steady uptrend, and Friday’s strong performance kicked it up another notch. The stock hit a new high of 6.66, marking a move of 74% in just over six weeks. The stock filled almost the entire topside gap that was on the chart, and the RSI has just cracked into the Power Zone, so we’ll want to continue to keep an eye on its activity.

Despite continued China trade tensions throwing a wrench into the markets to start the week today, we are going to be looking a little further ahead with an options idea relating to the imminent golden cross on the SYY chart, combined with the company’s earnings beat posted this morning in the premarket.

The food wholesaler has a chance to break a double top, and we’re going to be ready with an options idea in the event that it manages to do so. Our highlighted targets are going to be the SYY 06/14 $69.50-71 Calls.
_____

Special Note: Our extended watchlist today contains more penny stocks than usual. The OTC tends to heat up when uncertainty strikes the larger markets. We’ll have an eye peeled for interesting activity on that front.

Our first options idea of this short week turned out to be a rousing success by all accounts. We noted the change in the tides regarding a general market rebound aided by a healthy surge for oil, and proposed a range of weekly contracts in the SPY to help us leverage some gain opportunities out of those conditions. We signaled our interest in the SPY Weekly $188-191 Calls and were met with some very good chances as the SPY itself steadily pushed from 187.63 to 189.81, closing very close to that high mark.

This morning it appears as if those figures will be extended as the SPY once again gaps up in the premarket, having already breached into the $190’s; we’ll be on the lookout for a possible dip-and-rip.  Another boost for the markets today would mark the first three-day rally of 2016.

We had been passively monitoring GBSN for a bottom for quite some time when we finally decided to make mention of it in our morning report yesterday. The stock was in an overall downtrend for many months leading up to its all-time low which was recorded just last month.

We seem to have brought GBSN back into the fold at a very opportune moment, as yesterday marked one the stock’s largest single-session gains of the year so far. From its morning low of .1951, we watched as it shot to a daily high of .2698 which hashes out to a healthy intraday day pop of 38% on double its 3-month average volume.

Ideally we’d like to see GBSN maintain support above yesterday’s swing low while attempting to test the key area of current resistance at a previous swing high of .33.

Another notable mover from yesterday’s session is RMTI, which managed a strong push over the first couple hours of trading. The stock traded from a daily low of 6.90 on up to 8.63 on approximately four times its 3-month average volume, which represented a respectable 25% move up.

We’ll continue to keep an eye on RMTI moving forward, especially in light of the interesting PR to hit wires this morning alluding to a potentially lucrative agreement that puts the company in line to market its treatment for end-stage renal and chronic kidney diseases in China.

We tagged PVHO for observation in our report dated a week ago today, meaning it took just four sessions for this idea to yield a great opportunity for a lucrative swing-trade. We observed a low of .084 subsequent to that alert and the stock hasn’t looked back since. It has set higher highs in each ensuing session, culminating in yesterday’s high of .18. That marked a move of 114% so cheers to anyone who was along for the ride!

We introduced ZINCQ as ZINC a couple of weeks ago before the Q was appended, and despite the bankruptcy status, we’ve seen quite the move out of the stock.

We showed up slightly early to the party, introducing it as a bottom-watch play on the first of this month, but that just ensured that we had a chance to position ourselves before the fun began. Our observed low subsequent to that initial alert was .06 just a couple days hence, and that eventually gave way to yesterday’s impressive new high of .335, which marks an epic 458% run.