If you’ve been following our reports for awhile now, at this point you’ve realized that we provide really great short-term options trading ideas on a regular basis, and this week was certainly no exception.

Out of four separate fresh trading ideas we formulated in yesterday’s report, all four proved to be big winners, with the help of another solid day of bullish activity for the markets as a whole.

Here’s what we were tracking, and the total possible gains that traders could have netted as a result:

We also want to throw in a quick highlight of SFUN, which we caught off of the earnings calendar this morning, in a pretty solid bottom-bounce setup. The stock’s coming off of annual lows registered earlier this month, and showing good momentum.

The earnings report was a mixed bag, with perhaps a main highlight being a 290% in revenue from the company’s lead generation services. We are mostly interested in tracking SFUN from a technical standpoint. The upside potential is certainly there.

To close out the week on Friday, we took our usual approach in signaling some last-minute options ideas for possible daytrades. In this particular case, we were attracted to the AVGO Weekly $252.50-257.50 Calls, and we’re pleased to report total success on that front, with the help of an eleven-dollar swing from AVGO shares themselves.

All three of the contract sets contained within our designated range produced impressive gain opportunities on the day. The total possible profits for daytraders on each set were as follows:

We’ll also formulate a new options idea to start off the week this morning. The market looks like it wants to turn around again today, so we’ll go ahead and slate the SPY 06/19 $289-290.50 Calls as our ones to watch.

We’ve also got a three pack of bottom plays with freshly reported earnings today. We’ll place all of the following on watch for possible rebounds this week.

Despite an overall lag in the markets yesterday, due in part to the Greek financial crisis, KBLB did manage a brief surge right out of the starting gate. We tagged it for its attractiveness with regard to its positioning on the chart as well as the interesting news that was released; the company claims to have synthesized a material which is stronger than spider silk. (>>View PR)

While KBLB failed to maintain that early increase, the nature of yesterday’s news alone will cause us to reserve a spot on our watchlist for this play. If the company has indeed developed a super-material as they’ve described, it could ultimately be a game-changer in everything from the medical field, to space exploration, and nanotechnology.

VSYS it hitting our radar as a potential bottom play with a potential news catalyst hitting presswires this morning. 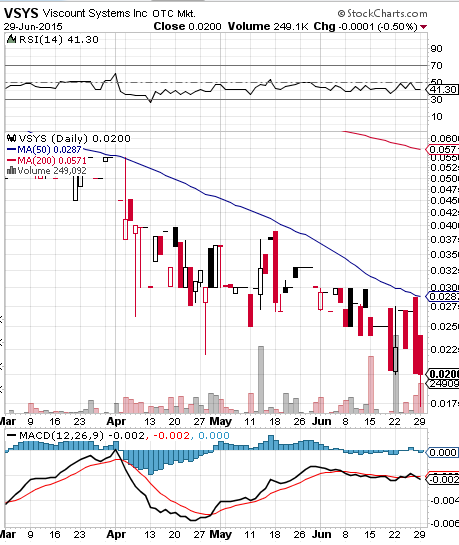 VANCOUVER, BC / ACCESSWIRE / June 30, 2015 / Viscount Systems, Inc. (“Viscount”) (OTCQB:VSYS), a software company specializing in physical and logical security solutions, today announced that it has fully retired a convertible note held by Vis Vires Group, Inc. The convertible promissory note was issued to Viscount on March 30, 2015 at a principal amount of $169,000 bearing interest at 8% per annum and was used to resolve short term liquidity issues. >> Full PR

There’s a fair amount of uncertainty with respect to how the markets will react to the ongoing fiscal turmoil in Greece. They appear to want to rebound this morning, but it could be a false positive. It leads us to a familiar scenario, where uncertain conditions open avenues of opportunity to intuitive traders.

What we’re going to do is sit on the fence and observe SPY 205.50-207 Puts and Calls to start out with, and decide where the action will be once the overall market sentiment has been firmly established. It’s a strategy that’s served us well in the past.

We’re also going to be monitoring JUNO $60-$63.50 Calls as the stock is gapping up heavily in the premarket.