We wanted send out an alert on FBCD this morning, if for no other reason than the fact that it’s been quite awhile since we found a bottom play trading near all-time lows in the super-subpenny range. We’ve definitely been known to do some bottom-fishing in our day, with some of our biggest wins coming from bargain shopping.

What we have in FBCD is a stock that has been beaten back to a record low of .0005 (reached yesterday) which catches our attention in a big way. We are going to stay vigilant as we monitor this play for a solid bottom, because a snapback to to the double-zero range is not only very possible, but also has the potential to happen quite rapidly.

With so little room to the downside, one might classify FBCD as a “lottery ticket” type of play. The action on super-subpennies have the potential to return exponential gains, which is why we’re going to give it a spot on our running watchlist.

A quick glance at the chart shows that each time an influx of volume has come into the stock, it makes a run to test its 50DMA. From present levels, a jump to the current 50DMA would mean a chance for gains of at least 66% 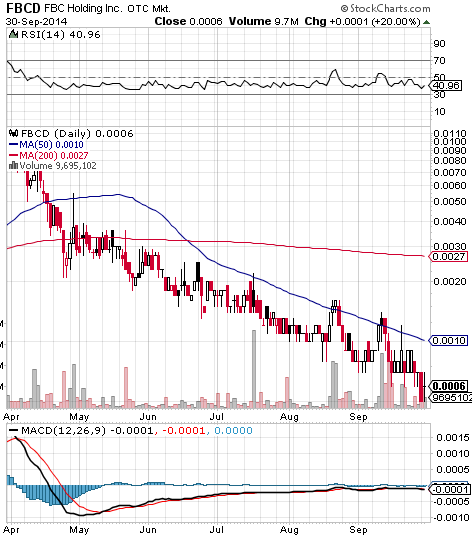 We were passively tracking HEB via our extended watchlist last month, and are going to keep giving it our attention as the new quarter kicks off today. The stock is gapping up to the tune of roughly 25% in the premarket.

We caught notice of HEB following the company’s announcement that it would collaborate with US Army Medical Research to develop treatments to attempt to overcome the emergence of drug resistance due to Ebola virus mutation.

With the current Ebola breakout making it a hot-button topic, and the company stating this week that it would be expanding its Ebola research, we’re going to still be keeping our ears to the ground on this one.

SPEX made an appearance in yesterday morning’s extended watchlist and had one heck of a solid session. The stock came out of the gate and ran from a low of .99 all the way up to 1.58, offering us the chance to bank up to 60% in profits as it traded more than 13.5X its 3-month average volume.

Disappointment over the delay of some upcoming litigation that Shperix has against VTech and Uniden (View PR) is the apparent cause of the stock’s gapping down in today’s premarket.

This is a play that has appeared on our newsletter many times over a long period.

Toward the end of March, the stock reached a new 52-wk low, and has been bouncing ever since.

Yesterday, the stock traded record volume, and began a breakout. With all of the attention and momentum observed yesterday, we are adding it back to our watchlist, suspecting that a multi-day run could be in effect.

This is another recovery play coming off of its 52-wk lows, KERX has a hug gap to fill to the upside.

They recently announced positive results from clinincal trials in a PR on Monday. >Read More

We’ve had some luck with pharma plays in the past, and this one looks as if it is coming off of being oversaold. 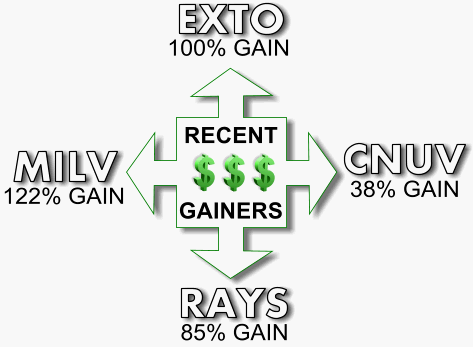 FBCD provided an opportunity to see a 40% intraday gain on Friday, opening at .01, and hit a high of .014 on seven times its average 3mo. volume.

This comes on the heels of an influential PR released post-market on Thursday. We like the current MACD indicator, as it is converging quite sharply toward a cross; that leaves us bullish on FBCD.

Last week, we were calling for a MACD cross on the EXTO chart, and it transpired just as predicted.  The stock is in the early stages of yet another uptrend; the last run took us to gains of over 400% in under a three-month period.

We are very interested to see how EXTO fares on this particular swing.

Remember, we are always on the lookout for new picks, and if any of our readers  would like to suggest one, feel free to reply with your recent activity. If it measures up, we’ll put it in the newsletter.