A couple of the options trading ideas we floated in yesterday morning’s premarket report turned out to be solid winners on the day. We had highlighted calls in the SNAP and CMG chains and in both cases we met with some serious opportunities.

Other Updates – Here are some stock calls we’ve scored on so far this month, that were helped to new highs yesterday as the markets surged and stayed green throughout the course of the day.

Despite a poor day for the market yesterday on the heels of oil futures falling to negative values, one of our daily trading ideas still produced for us fairly well. We had signaled EFX Weekly $126-129 Calls in yesterday’s premarket report, and half of that range saw incredible multibag gains.

We’ve got a few more ideas to add to our running watchlist this morning, with a heavy slate of earnings reporters catching our eye here in the premarket.

We always try to keep an eye out for bottom plays with recent insider buying, and today it was SIEB that caught our attention. A member of a >10% Ownership Group purchased over $12M in SIEB at 5.80, just a bit higher than the stock’s recent annual lows.

Accordingly, we are going to place SIEB on our list of interesting stocks to track, and monitor its movements moving forward.

IZEA is a stock that we have been following for several weeks. We highlighted this play back on August 12th, and would subsequently observe a low of 1.04. In two definitive pushes, the stock has gained quite a bit of ground over roughly the past six weeks.

Yesterday it managed a new high of 3.00, which marks an overall increase from its mid-August low of 188%

We’re always scraping the barrel for a good bottom play, and we want to place SNAP on watch for just that reason this morning.

A thirteen dollar stock just two months ago as you can see on the included chart snapshot, SNAP has now fallen below the eight dollar mark, and is egregiously oversold at the present time. We’ll keep tabs on this play moving forward, as a rebound appears imminent at some point in the near future. 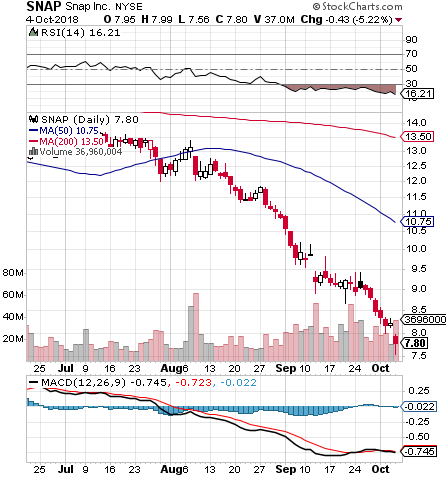 Lastly, we want to backtrack to Monday’s report, in which we designated LODE as a stock to watch.  It certainly was something to see this week as it ran from a low of .1201 to as high as .315. That’s a 162% intraweek push.