We mentioned FREE in yesterday’s morning report as a bottom-play that was gaining momentum. The stock had begun to show signs of life after recently establishing a new 52-week low, and our focus paid off almost instantly.

We witnessed a slight dip to a low of .1113 shortly before 10AM, after which time FREE proceeded to surge its way to a daily high of .179. It registered as a 61% intraday swing before the stock tapered back to close at .091.

We’ll continue to observe the activity on the FREE chart as the week progresses, as there is a fair chance that we will continue to see sizable swings in PPS.

Speaking of major runners, the call we made on AXPW on Monday continued to extend its gains early in yesterday’s session. We caught this gem at a low of .0421, and watched as it went on to touch .36 before it began its pullback.

For us to remain interested in AXPW for further opportunities, we’ll need to see it maintain support at or above yesterday’s swing low of .14. Key resistance is sitting between .18-19.

Synergy Pharmaceutical, Inc. SGYP came with some positive news this morning, and is gapping up heavily in the premarket. We’ll look for a potential dip-and-rip scenario to occur following the opening bell.

Blue Shere Corp. BLSP announced a tentative share buyback program this morning that would allow for the company to acquire up to $500K-worth of its common stock from the open market and/or via privately arranged transactions. Couple that with a chart that has the look of a classic bottom-play, and we’re very interested to include BLSP on our watchlist this midweek. 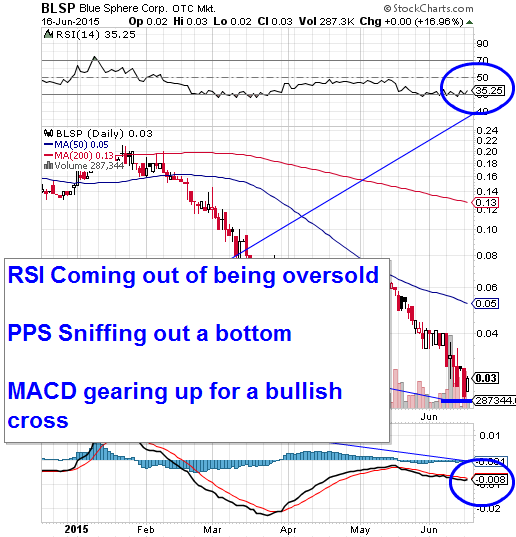 iBio, Inc. IBIO – A quick search of IBIO in our archives reveals a lengthy history of mentions. We have definitely seen some impressive moves from this play in the past. History tends to repeat itself, and did so once again as IBIO stood out on yesterday’s extended watchlist.

The stock made a solid intraday move, trading in a range from .72-.89. That was good for gains of up to 24%, and the move came on great-than-average volume. We’re going to keep a continued watch on this play; if it manages to break through its recent resistance area around 1.00-1.05, things could get very interesting from there.

Microvision, Inc. MVIS – This one appeared in yesterday’s gap-up watchlist, and it too would make a modest, yet solid move. The stock made a continual move-up in the first two hours of trading, rising from a low of 2.88 to a HOD of 3.44. That marked out an intraday gain of 19%

These stocks are hitting our scanner today as they gap up in the premarket, and we’ve got options ideas corresponding to each:

Esperion Therapeutics, Inc. ESPR has released top-line results on one of its studies, noting that the trials have met their primary endpoint. In light of that, the stock is up big in early trading this morning. This is going to be a situation we’ll want to monitor as the session commences.

Options Ideas: ESPR 04/17 $90 Calls (Last traded at 3.50) for a longer-term swing trade idea. For shorter-term day trading opportunities, we can look to play in-the-money Weekly Calls, in the event that any dip and rip scenarios present themselves.

American Airlines Group Inc. AAL announced today that it will now be listed on the S&P 500, and as a result, it’s trading up in the premarket.

Apple, Inc. AAPL is also opening up new avenues as it prepares to join the Dow Jones Industrial Average. It will replace AT&T(T) officially at the end of trading tomorrow. It too is gapping up in the premarket.

PPCH had already made a substantial move prior to our mentioning it in our daily report for the first time last Thursday. On that day we would witness a low of .0126, and in the few sessions since, the stock has begun to make yet another run.

Yesterday, PPCH topped out at a daily high of .027, which marks a 114% swing over our observed low.

Exactly one week after we first brought it to our reports, MCPI continued to impress during yesterday’s session. The stock made an intraday move of 35% from .65-.88, and did so on nearly three times the 3-month average volume.

Calculating from our initially-observed low, the 88-cent high represented a one week overall increase of 148%, so congrats to any readers who were able to take a piece of the action.

This is going to be a play we’ll continue to track; per the timetable released in the Aug 4th PR regarding the opening of three retail marijuana stores in Washington, we should be receiving another update sometime in the next couple of weeks.

It’s beginning to seem as if we can peer through a crystal ball into PBR’s future with the way it seems to obey our predictions of late. Our subscribers will recall yesterday’s report  wherein we mentioned our intent to monitor the $16 Weekly Calls for the second consecutive week, and that we’d be “on the lookout for a substantial move” provided the stock could once again surpass the $16-level.

As it has so many times in recent weeks, PBR behaved exactly as we’d hoped it would, smashing through $16, and eventually reaching as high as 16.48. As a result, our contracts made a solid move from .35-.62, an intraday spike equaling 77%

Following the same strategy from last week’s successful play on the $16 Weeklies, when the stock continued to run past the 16.30’s, those who had moved their strike price and rolled into the $16.50 Calls could also have collected a nice profit, with those contracts trading in a range from .12-.32 (+166%).

ELRA appeared in yesterday’s extended watchlist after we caught it off of a routine scan toward the end of last week. The stock offered up a nice dip-and-rip scenario yesterday. After trading as low as .0072, we saw a subsequent high of .0134, for total possible intraday gains of up to 86%