Our top billing of the morning is going to be SES, which we tagged for observation in yesterday morning’s premarket report. It’s always a good idea to check through our Extended Watchlists that we include in nearly all of our daily newsletters, and cases like this are the reason.

SES absolutely exploded to kick off the week, following a solid move on Friday as well. The momentum carried over into this fresh trading week, and the stock simply skyrocketed. From a low of 7.81, the stock reached as high as 26.10. That works out to a whopping single session gain of 234% and was good for the #1 top slot on the NASDAQ daily gainers list!

We also want to radar some JNJ calls on the heels of the company’s earnings beat and raised guidance. The stock has been in an ascending wedge pattern for the past 7 weeks, and its Q3 beat could provide just the impetus we’re looking for, to score with some weekly options calls.

After initially mentioning KGNX in Tuesday morning’s premarket report and observing a big intraday swing from this subpenny momentum mover (.00189-.0037, +96%), we mentioned yesterday morning that we wanted to continue to monitor its activity.

It ended up being a smart idea, as we bore witness to yet another solid upswing. After touching a low of .0025 right out of the starting gate, it didn’t take very long for KGNX to begin a run that lasted for the better part of the entire day. The stock ran hard into the close, touching a new high of .0044. It marked an intraday rip of 76%, and an increase of 133% over our observed low on Tuesday.

Once again recording higher lows and higher highs along with stronger than average volume, we’ll need to leave a slot on our radars open for KGNX as we head into week’s end.
____

Speaking of subpenny momentum plays, we want to keeping watching the activity in On4 Communications, Inc. ONCI.which we also put on watch in Tuesday’s premarket report. We saw the stock trade as low as .0021 that day and it hit .004 yesterday, a move of 90%

With the stock building a continuously higher base of support in each of the past four sessions and running to new highs, it is currently in blue-sky breakout territory. We continue to stay on its trail.

We also want to provide an update this morning on the performance of one of our options ideas from this week. On Tuesday we tagged the PLCE Weekly $70-75 Calls for observation, and yesterday they really heated up for us with some serious intraday rips from all three sets of contracts.

We continued to track our successful options idea from earlier in the week yesterday morning, as the SPY Weekly $188-191 Calls once again provided ammunition for some serious gains. Despite already having moved up considerably, we mentioned our expectations that those figures would be pushed higher and indeed they were.

As we did yesterday to save time, we’ll just outline the gains made by the bookend contracts of our observed range; similar gains would have been up for grabs in any of the contracts within. The $188 Calls extended their new high to 5.35, which represents a 226% overall move, and the $191’s  pushed to 2.68- a gain of 587% over Tuesday’s low.

In addition to tracking our initial idea, our trader’s chat participants* were offered a followup idea prior to the bell yesterday that yielded big-time profit chances as well. As you can see from the screen capture below, we mentioned the possibility of rolling strike prices up to the $189.50-193.50 range, and all of those contracts were winners as well. 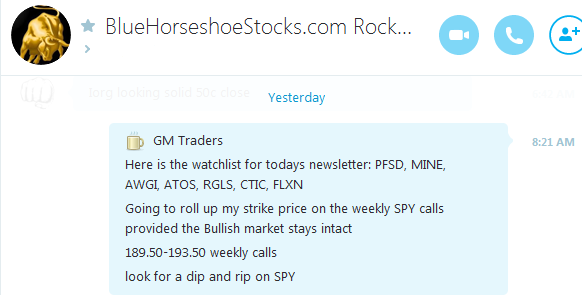 *Participation in our daily trader’s chats which currently take place via Skype is fun, free, and as simple as sending a contact request to username ‘stocksumo‘. All of our loyal readers are encouraged to take part!

We’ve spotted what could turn out to be a solid rebound play in CPRX this morning. On the heels of the company’s announcement that the FDA had served it with a letter of refusal pertaining to a recent NDA filing, the stock absolutely tanked.

The caveat is, the notice came with assurance that it was not related to the clinical data or perceived efficacy of the drug in question, but a filing error only. This means that the stock lost a good portion of its value in a single day for what seems to amount to nothing more than a clerical error (see chart below). We’ll be very interested to monitor the stock in coming sessions and observe its reaction. 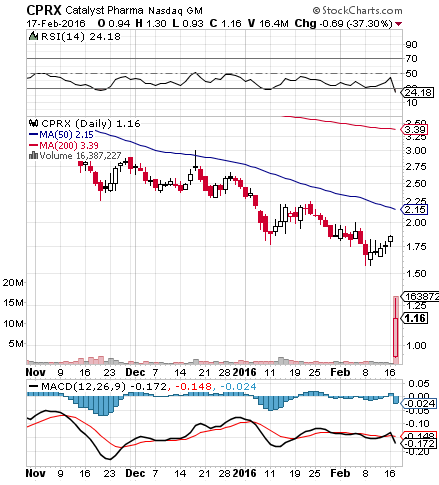