Our fresh options idea for the day yesterday morning was a range of puts in the TSLA  chain, on the heels of its poorly-received earnings call. What resulted, as the stock began the session under duress, were some very nice opportunities for us before lunchtime.

Our designated range was the TSLA Weekly $285-277.50 Puts and we happily observed the following solid moves:

Esperion Therapeutics, Inc. ESPR – We like the look of the ESPR chart for a potential extended recovery play. As you can see on the chart the stock has been in quite a bit of trouble over the past few sessions, losing roughly half of its previous value in a matter of just a few days.We’re always looking for heavily oversold stocks in line for the chance at a big rebound. 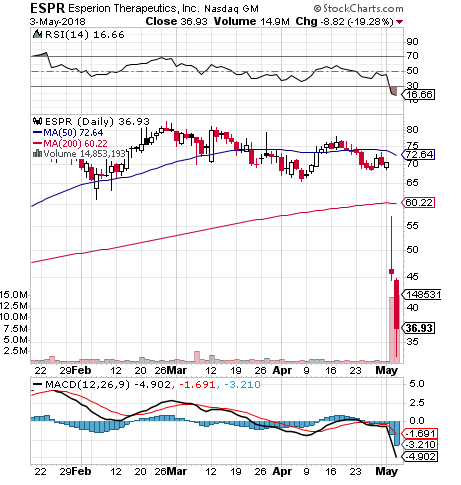 Iconix Brand Group, Inc. ICON – We also want to add this one to our watchlist. The stock has been pushed way down amid an SEC investigation concerning ICON and a famous partner of the company, award-winning recording artist Jay-Z, and his Rocawear brand.

As you can see below, in addition to a more steady backslide that dates back much further, the stock has really gone into free fall in recent sessions, resulting in a scenario that could produce a significant rebound, which we’ll want to be looking for. 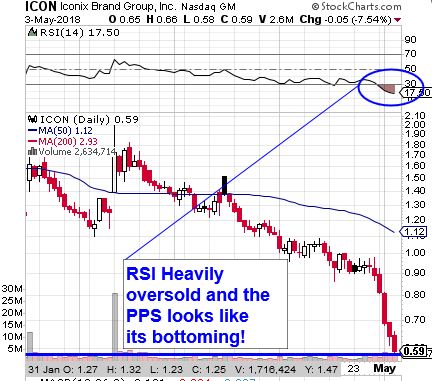 U.S. Stem Cell, Inc. USRM
We’ve been tracking USRM very closely over the past few weeks, since initially mentioning it on the morning of February 27th and witnessing a huge subsequent increase( .014-.0545,+289%). We monitored the consolidation off of that high down to .0175, and once again signaled that it was time to give it our close attention last week on the 15th. 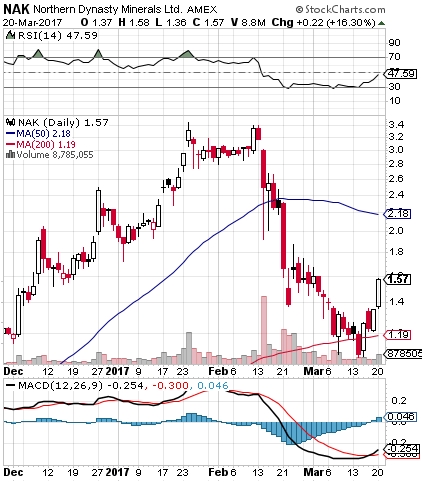 Both of the following are plays that we’ve tracked in some capacity in the past, and each of them grabbed our attention with recent insider transactions of a sizable magnitude which were executed at higher levels than the current PPS. We like to monitor stocks whose directors have confidence in future price performance, and that’s the impression we get when they soak up large blocks of shares in this manner. Each of these stocks is also currently trading at a relative bottom, so we’ll be watching in the days and weeks to come for signs of bounceplay opportunities.

In the case of XONE, CEO Kent Rockwell last weekend filed a Form-4 indicating the purchase of a $13M block of XONE at 9.13, more than a dollar per share higher than the current PPS. This is a significant development that warrants heavy monitoring for XONE.

The traunch of shares purchased by ESPR director Tim Mayleben wasn’t nearly as large as the previously mentioned block, but still, a $100K investment is nothing at which to sneeze. The trade was executed at 14.08 (Current PPS:13.77). ESPR has just come up off of its newly established 52-week lows, and has been going through a bout of serious under-performance, so we’ll want to keep our heads on a swivel for any developments that might kick this thing into gear.

To kick things off this week on the options front, we’ve formulated a couple of ideas based on announced and expected earnings, and the resultant activity we’re observing here in the premarket.

We’re looking at going bearish on TIF, which, on the heels of a lackluster holiday season in terms of jewelry sales, failed to meet or beat earnings expectations and is currently gapping down in early trading. We’re going to track a range of contracts here, namely the TIF Weekly $66.50-64 Puts, for potential daytrades.

NFLX has its earnings call slated for the post-market today, and we’re going to want to track a range of calls in anticipation of that event. We’ve witnessed runs into earnings so many times before, it’d almost be foolish to ignore NFLX under the present circumstances. We’re going to keep an eye on NFLX Weekly $105-107 Calls to take advantage of a possible continued run-up for the stock.