After officially wrapping up our last week’s excellent performance yesterday morning, and reporting the nice gains we managed on Friday, we kept the momentum going with some fresh options ideas. We always try to feed new ideas into the mix each and every day when possible, and keep our focus on where the potential action is heaviest.

We went bearish on both NRZ and SAP, signaling the NRZ $9-8 Puts and the SAP $130-120 Puts. In both cases we had access to significant gains on the day, which were as follows:

We’re going to kick off the fresh trading week this morning by going over the performances of the plays we submitted in Friday’s premarket report. Those included targets in the US Steel, Cleveland-Cliffs, and Capital One options chains. It was a wrap-up to an already successful week, and we ended it on a high note.

We’re just days away from SPAQ’s vote on a merger with Electric Vehicle maker, Fisker, whose new EV set for launch, ‘The Ocean’, is laying claim to the title of ‘Most Sustainable Vehicle Ever’.

It’s an interesting scenario, and with the stock at a relative low on the chart at the moment, we are going to place some longer term options on watch, with the SPAQ 12/18 $10-12.50 Calls. 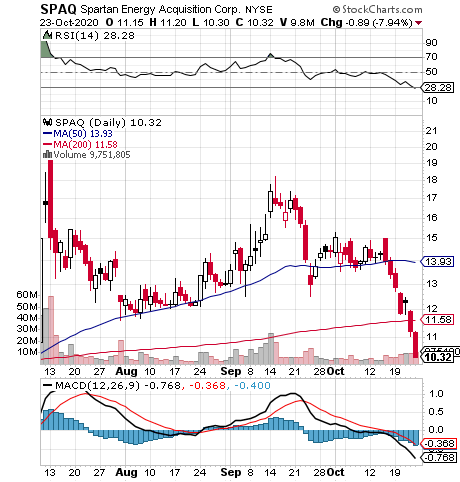 It’s been awhile since we’ve run across a stock trading at a dead bottom (.0001), and even longer since we’ve discussed one in our reports, but in light of the PR we caught this morning on PRDL, we’re going to make an exception.

We might call a stock like this a “lottery ticket”; a low probability, extreme high reward play. Super-subpennies by nature are  highly speculative, but have the tantalizing quality of having nowhere to go but up. Especially in the instance of a stock like PRDL which announced a massive share reduction this morning.

With a stock trading in a higher price range, a 30% reduction should roughly equate to a similar gain on the chart. With a stock like PRDL, where each tick up on the chart equals a 100% gain, there’s really no telling where the road will lead. We just know we’re very interested to observe the result.

Starting with a block of two billion shares, the company is claiming to have planned for the retirement of a total of 30% of its common stock, click through to the PR below:

Following Monday’s initial alert on MCPI, we observed a low of .0355, and sent out an update yesterday afternoon to highlight the 30% move the stock had made up to that point (.465). However, MCPI ended up pushing into the close at a new high of .485 and increasing our total possible two-session gain to as high as 37%

It remains on our radar today after such a strong close. Any time a stock closes at a new high of day, there’s always a chance for some momentum spill-over into the following session.

We’ve been hot on the trail of the PBR $16 Weekly Calls this week, tracking them from a low of .20 following Monday’s report, to yesterday’s high of .64 (+220%). After that spike, we saw a pullback, and the contracts ended up closing out the day at .30.

From here, we’ll be looking for the possibility of a dip-and-rip scenario, so it’ll be important to keep our eyes peeled for quick-strike opportunities.