Continued Options Success
–
Yesterday we mentioned that we were in the heart of a major flood of earnings reports. We recapped the 4-pack of ideas we gave out on Monday, and formulated new ideas for four more plays. Once again and for the second day in a row, ALL FOUR of our ideas bore major fruit in a single session.

For any newcomers that don’t understand why we go back to quick-strike options trading again and again, this is the reason. There’s no other way to make such large potential gains, so reliably, over such a short period. Even the OTC Markets cannot provide the same near-term volatility.

These were the intraday gains made possible by yesterday’s fresh ideas:

Why stop now when we’ve seen such immense success this week? Here are a pair of big name earnings reporters that strike us as having the highest amount of potential to perform well once the session gets going.

We’ve been quietly tracking this play for quite some time, and feel it’s just about ready to make a move. As you can see on the included chart, PVTL has sold off after recent earnings, and the stock has found support at a solid double-bottom in the $19-range.

You can also see that PVTL is approaching heavily oversold territory, and the MACD is converging sharply toward a bullish cross, not to mention a sizable gap to the upside. We’re going to want to have a range of options contracts on watch in the days and weeks ahead in the event that the rebound occurs which looks just about due at the present time. 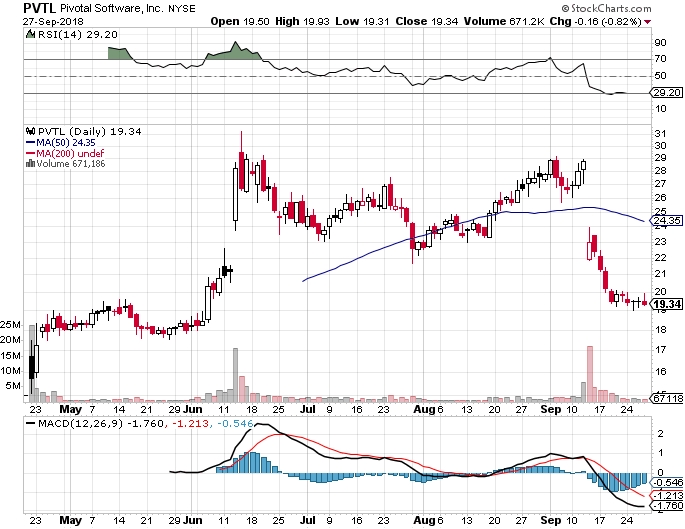 We also want to designate a pair of options contracts for the Blackberry chain this morning on the heels of the company’s Q2 profit beat.

We’ll be looking for a dip-and-rip scenario, which, if it occurs, should produce some significant gain opportunities in the BB Weekly $10 & $10.50 Calls.

Our primary focus has always been to find near-term trading opportunities first, assigning longer-term calls a secondary priority. However, we’ve had quite a bit of good fortune this year in identifying stocks that have gone on to have considerable extended runs.

HEAR is one such stock, that we first signaled for observation on April 9th, at which time the stock was trading for as little as 2.76. Over the ensuing nine weeks, we have seen an incredible, near-continuous bull run that has resulted in new highs of 23.20 yesterday. That works out to an increase of 740% over a span of a little over two months!

Being in blue skies, there’s no telling what new highs we might see in HEAR; it’s certainly plausible to believe we may see our total observed gain reach a thousand percent at some point in the near future. At the rate things have been going, it’s certainly not an unreasonable thought.

We also want to provide a quick update on our bearish options idea from yesterday’s premarket report, the HRB Weekly $26-24 Puts. We formulated this range after noticing the stock getting kicked hard despite posting an earnings beat in the post-market on Tuesday.

We tagged GALT on Tuesday morning after noticing a big surge in activity, and its run has continued nicely over the course of the week.

We’ve now observed a solid 37% bullish move from 5.83-8.00, and will be on the lookout for the possibility of more new highs.