Many of you will recall Wednesday’s report, wherein we outlined our interest in the FB 9/13 $41 Calls. As you can see on the chart below, after a quick spike they mostly tapered back, to a low of 1.29, before surging as high as 2.04 yesterday afternoon. That move represents a 58% gain.

With FB closing at 42.75 yesterday, it appears to be gapping up this morning, having last traded at 43.25 pre-market. Provided this upward trend continues, we could be looking at even further profits as we head into next week’s expiration date. 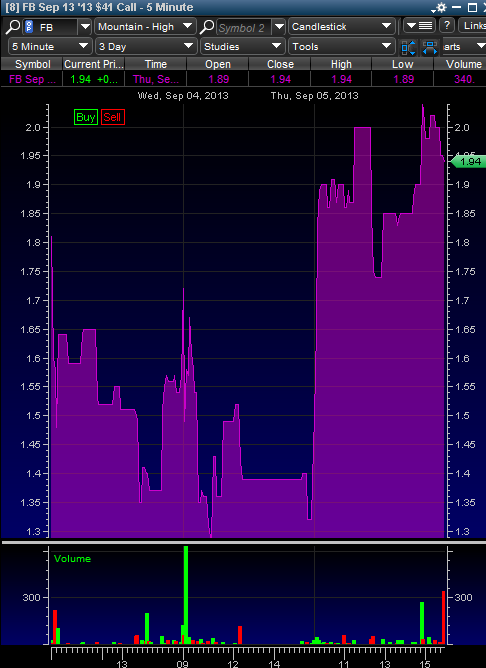 After an appearance on yesterday’s watchlist, PLUG  appears to be gearing up for a move. The stock traded at a low of .572 yesterday, and appears to be gapping up today, currently trading at the .66-level.

PLUG has brought us big gains in the past, which is a large part of why we are monitoring it so closely at present. Back in February we followed PLUG coming off of its 52-week lows as a bounce play from the .125-area, which have obviously led to triple-digit gains.

We’ll be watching PLUG to maintain support at a previous swing high of .55, and the next key level of resistance is going to be at .76.

LTCHD continued to line our pockets on Thursday, with a 52% intraday move from the daily low of .171 to its new high of .26. Remember, on Wednesday, the stock provided us with a chance at 92% in gains in a run from .12-.23. Overall, a buy at the low following our alert and a timely exit at its peak would have amounted to a profit of 117%

We were looking at INO a couple of weeks back as it was rebounding from a recent consolidation, and the stock was around 1.60. It looks as if it is continuing its recovery today as it is trading pre-market at 2.17, a rise of 36% from Friday the 23rd’s low.

We first started talking about Groupon this spring at around the 6.00-range. We followed up with an early August mention upon a good earnings report, and we saw highs in the 11.20’s. After receding back to 9.27, the stock is currently trading once again at the 11.00-range.

LTCHD landed us atop the Penny Stock Rumble following yesterday morning’s alert.  After touching an early morning low of .12, the stock would stair-step its way up for the entire day, closing out the afternoon at its high of .23. That was a golden opportunity for our subscribers to bank up to 92% in gains on a single session.

This excellent daily performance came on a large amount of volume, and spawned a nice setup for the chart as the 50DMA is preparing for a Golden Cross of the 200DMA. We definitely want to keep this play on our watchlists moving forward. As is the case with any heavy gainer, we also want to stay cautious for a possible reversal. 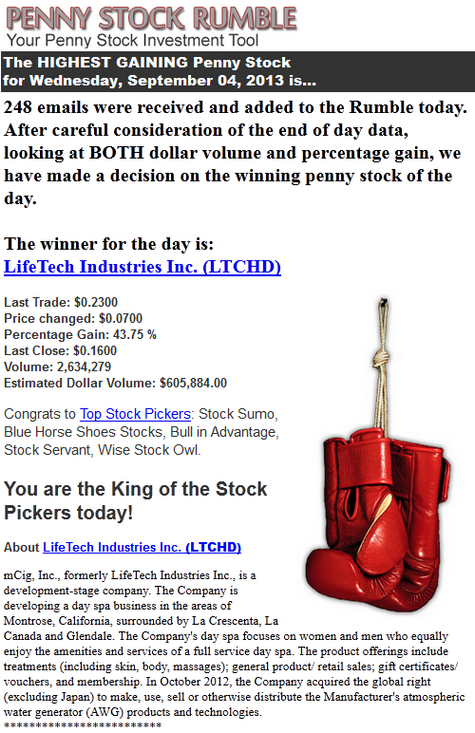 We put LTCHD up on yesterday afternoon’s Extended Watchlist, and are entering it into the discussion this morning as a new play on our marijuana-related stock radar. The company has recently transitioned to a new name, from Lifetech Industries to the current mCig. Along with that change, the company effected a 10-for-1 forward split.

For people who already owned shares prior to the restructuring, those shares were subject to a routine hold, which can take 3-5 days for the position to become free-trading. So we are on the lookout for a pullback this mid-week as that occurs, and people attempt to lock in profits by selling their shares into the market.

From there, we’ll be on the lookout for a bottom, and subsequent bounce.

The company falls under the marijuana stock category, as they are preparing for the rollout of their first mCig product within the next month. The company will be looking to capitalize on the legalization of marijuana in two states, as well as the growing popularity of “vapor pens” which vaporize cannabis concentrates for consumption.

BELLEVUE, WA, Aug 28, 2013 (Marketwired via COMTEX) — Lifetech Industries, Inc. (OTCBB: LTCHD), announces today that it has changed its name to mCig, Inc. and completed a forward stock split on a 10-for-1 basis.

On August 2, 2013, the Company’s Certificate of Incorporation was amended and restated to effect the name change and the forward stock split. The name change is part of an initiative led by incoming CEO Paul Rosenberg to reposition the company and its technology by launching a new consumer product, the mCig — a purpose built loose leaf eCig that will be launched next month.

mCig’s CEO, Paul Rosenberg, commented: “With the name change complete we can now focus on the next chapter of our business development targeting two long-term secular trends by developing consumer products that are exciting and disruptive. We will be updating our shareholders shortly with more information on our first product the mCig which will be launched in Q3 2013.”

The name change and the forward stock split were also approved by the Financial Industry Regulatory Authority (“FINRA”). The name change and forward split will be effective for trading purposes on the open of business on Thursday August 29, 2013. The new symbol will be (LTCHD) for 20 business days until September 27, 2013 when the symbol will change to (MCIG).

EDXC is another medical marijuana play that we’ve been covering for quite some time. It also appeared in Friday’s report that revisited our interest in many cannabis stocks. Since that time, EDXC has traded from a low of .055 (Friday) to yesterday’s high of .097. That works out to a two-session move of 76%

Congrats to anyone who was able to take advantage of that timely alert, and be sure to check out that report containing all of our marijuana interests, as the entire sector was given a morale boost via last week’s US Department of Justice announcement that the federal government would not be interfering in individual states rights to make marijuana available to their citizens for both medical and recreational use.

PVEN has experienced an abnormal burst in volume over the past week or so, and yesterday’s volume exceeded the three days’ prior combined. Given that the stock wasn’t really trading up to that point, we have reason to suspect that PVEN could be the subject of an upcoming promotion. This out-of-the-blue volume explosion could be a result of front-loading, and so we are placing this stock on watch for any major price movements that could occur.

We also exercise the utmost caution when dealing with plays that have promotional activity going on behind the scenes, and this instance is no different.

FB has recently been pushing its 52-week highs (Hit 42.26 on Friday), so we are looking at how to capitalize on the trend via options trading. The 09/13 $41 Calls (closed at 1.57 yesterday) are of great interest to us, because if FB can breakout to $45 by next Friday, we could be looking at multi-bag gains from these contracts.