Our most recent mention of IWEB, a stock we’ve been following since July, came on October 1st. Subsequent to that alert, the stock was trading at a low of .0193, before hitting a high of .03, a gain of 55%  It seems every time we’ve released a report containing IWEB, it has responded with good performances. Prior to the October alert, we observed a 21% move from .028-.034 in September. Then of course, we had our initial alert of IWEB which saw the stock carry from .022 up to .0355, as well as a slew of bounce opportunities that followed (From .023-.04, and then again from .026-.042).

There are no two ways about it-  IWEB has certainly provided us with a continual string of chances for quick-strike profits. This morning, we are once again turning our attention to the company, which has announced the inking of a contract which represents a huge new account for IWEB and its “Computers & Telecom of Kansas City” subsidiary. The following PR outlines the details of said agreement, under which IWEB will provide fiber services, managed routers, backup servers and storage, and “never fail” business continuity automation:

“Block Information Technologies (a division of BRES) is responsible for all the technology and connectivity to BRES’ 22 million square feet of real estate under management in the Kansas City area,” said Rob Howe, CEO of IceWEB. “BRES has been a long-time customer of CTC’s, but this represents a quantum step forward in our business relationship in that it includes not only a private Layer-2 fiber connection (private network), but also hosting and additional wireless services. This is a true Enterprise Class Business Continuation implementation that is a key part of Block Information Technologies’ far reaching strategy.” >>FULL STORY

We are returning to IWEB at a good time, with regard to the chart. After undergoing a consolidation, the stock is now coming off of a bottom, where it found support in the .02-area. Conditions appear to be ripening, as the MACD is pinching together getting ready for a cross, as well as the RSI coming off of being oversold. Current resistance sits at the 50DMA (.029) and the 200DMA (.034). We’ve provided a video presentation of the chart for your convenience:

FU was an outstanding call off of our extended watchlist yesterday that yielded substantial gains, having traded as low as 5.46 and hitting a high-of-day at 7.00, before closing with strength at 6.95.
The trading action on FU offered up the chance for as much as 28% in intraday gains.

IceWEB, Inc. IWEB
–
Most of you will recall our coverage of IWEB, which began on July 9thand lasted through August. During that time, we saw the stock make a nice move off of its then-52 week lows, traversing its way from a low of .023 all the way up to .042, an 83% overall move, while also posting several hundred percent in cumulative gains during that time.You might also remember our outlining of the company’s aspirations to make the shift from cloud storage alone, to a full-range cloud services provider, and today, we received confirmation that the transition has been achieved, with the completion of the company’s most recent acquisition.

This is occurring shortly after we’ve seen IWEB come off of a new 52-week low, so the timing on this could actually work in our favor. We are going to have IWEB on bottom-watch as it searches for a base here, as well as watching for reaction to the good things the company obviously has going on behind the scenes. 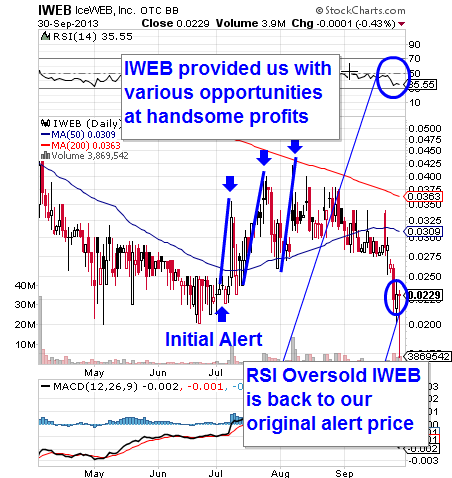 STERLING, Va., Oct 01, 2013 (BUSINESS WIRE) — IceWEB, Inc. – (OTC BB:IWEB), today announced that it has completed its acquisition of Computers and Tele-Comm, Inc. and KC-NAP, LLC of Kansas City (collectively “CTC”). Details will be filed in a Form 8-K with the Securities and Exchange Commission. >>> FULL STORY

We caught ZLCS at a low of .78 last Friday, and mentioned it once again yesterday morning as we believed the stock was in for “another substantial move upward”. The stock did indeed turn in a nice performance yesterday, hitting a high of 1.20, a 17% intraday move, and an increase of 54% from Friday’s low. Rapid increases over such a short time period for a NASDAQ-traded stock are impressive to say the least.

In addition to another fruitful trading session with regard to price-per-share, ZLCS landed us an honorable mention on yesterday’s Penny Stock Rumble for picking the stock with the highest daily dollar volume.

NNRX, ALVR, EDG, LXRX
Plandai Biotechnology, Inc. PLPL
We’re sending out an update on PLPL this afternoon following this morning’s report. After trading as low as .55, the stock made its way back to .67, registering a 22% intraday gain in the process, and is currently holding support above the 50DMA.
In addition to an opportunity for a tidy profit during early trading, PLPL provided the public with a new press release that you can check out below. It eludes to an intellectual property licensing agreement, under the terms of which the company should be able to increase the effectiveness of its botanical extracts by a significant margin.

SEATTLE, WA, September 3, 2013 – (ACCESSWIRE) – Plandai Biotechnology, Inc. (PLPL), a producer of highly bioavailable plant extracts for industries including health, wellness, nutriceutical, and pharmaceutical, today announced that it has signed an exclusive agreement with North-West University in Potchefstroom, South Africa, that holds the patents and associated intellectual property associated with the entrapment of compounds in long-chain fatty acids-based nano- and micro-particles, known as Pheroid(R). Under the terms of the world license, Plandai has the exclusive right to use the Pheroid(R) technology with all Phytofare polyene-based extracts, which includes proprietary extracts of most botanical matter, for human and animal use. >>> FULL PR

Some links for those who may have missed this morning’s newsletter:
PLPL Report
PLPL Video Chart