In yesterday’s report kicking off the new trading week, we backtracked to our alert of ICLD coming in our report from two Thursday’s ago, at which time the stock was trading at a low of .0157.

We mentioned how it had risen exponentially since that report, and specifically cautioned our readers to track its movements closely right from yesterday’s opening bell. The strength of the ICLD close on Friday was simply too strong to ignore and despite already having spiked considerably for us up to that point, the stock turned in another fantastic intraday performance.

From an early low of .05, the stock ran all the way to .0869 during the course of a session where it steadily climbed all day long and closed near its high. That marked an intraday boost of 74% and and an overall move up of 340% from our observed low from Thursday the 2nd,

Once again, with the intensely bullish close to another session, we’re going to have our eyes peeled for further moves from ICLD, whether they come in the form of a continued push upward, or are preceded by a dip-and-rip pattern off of these impressive highs.

Prior to yesterday, CBR had been stuck in a rut for quite some time, but we noticed some abnormal premarket activity and decided to include it in yesterday’s report. It was a good idea, with CBR running from .4329 to .65, which works out to a 50% intraday pop.

The move came in conjunction with the company announcement that it was mulling over an unsolicited offer to be acquired through merger by Ameri Holdings, Inc. (AMRH) which values it at .75/share of CBR stock.

Given that the stock is still trading in the low .60’s at present, we’ll be interested to continue to monitor its progress as the company deliberates the merger offer.

Cerulean Pharmaceuticals, Inc. CERU – We began tracking CERU just over a month ago, and after an extended period of slow and steady increases, finally yesterday the stock broke out in a more significant manner.

Our initial alert on CERU came on the 3rd of February, at which time the stock was trading at a low of 1.11. Yesterday the stock streaked to an impressive new high of 2.65, which comes out to a total upswing of 139%

Aurinia Pharmaceuticals, Inc. AUPH –  AUPH is another stock we’ve been tracking for much of 2017 so far that also broke to new highs yesterday. We witnessed a low of 2.95 in AUPH subsequent to our alert on the stock dated January 27th. Gradual increases over the next month would occur, and since we’ve hit the month of March, the stock has been going haywire.

Yesterday AUPH soared to (and closed at) 10.54 which represents a total move of 257% in less than six weeks!

We took the opportunity to target some AA puts yesterday morning after noticing a technically weak chart, combined with a let-down on the company’s earnings report. Post-earnings options ideas are quite simply one of our favorite ways to see rapid moves to the upside, and Alcoa was no exception to that rule.

Our specific targets were the AA Weekly $32-30 Puts, and every set of contracts within that range afforded us the chance at hefty single-session profits.

With the stock gapping down slightly in the premarket once again, we’ll be on the lookout for those ranges to be extended. Should the stock’s heavy decline continue, we’ll continue to track those, as well as explore the possibility of rolling down our strike prices to stay closer to the money.

We want to circle back around to provide an update on the recent activity of BSPM, which we placed on watch back on the 15th of last month. We would subsequently observe a low of 2.54 the following morning, and after a steady stair-stepping performance in ensuing sessions, the stock went meteoric during trading yesterday.

It made an excellent 96% intraday push from 3.60 up to its new high of 7.06, which marked an overall increase of 178% above the low we witnessed just under a month ago. The move was catalyzed by the launch of the company’s rhinitis and sinusitis treatment in China; an absolutely huge market.

We want to signal some longer-term options ideas for tracking in the weeks ahead on both Nike and Lululemon. NKE just registered new 52-week lows yesterday, while LULU has come down its lowest PPS since February. Therefore, we’d like to monitor the activity in the following options contracts. 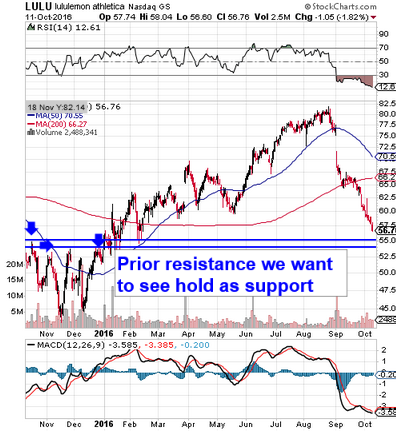