We’re going to start things off today by providing an update on our coverage of a really nice move in LINU subsequent to our most recent alert on the stock from the morning of September 11th.

We observed a low of 1.05, and after a huge run on Friday, LINU reached as high as 3.20. It represents a very nice 205% move for us in under a month’s time. Volume over the saem period has been extremely elevated, and Friday’s session logged the highest single day volume in the history of the stock.

We reported this in Friday’s newsletter, mentioning that further opportunities could be on the horizon and we did see some good action for that session as well.

Our first order of business this morning is to provide an update on GYST, which was the subject of our special report yesterday. If you did not catch our report, you can do so by hitting the following link >>GYST REPORT

To illustrate GYST’s performance during yesterday’s session, what better way to go over it than a video chart from our very own Stock Sumo! Click through to the video below, and also receive a quick lesson in understanding Level 2 quotes, which is vital for any beginning trader to take the next step!

The dip-and-rip we saw in GYST from .007 to .012 represented an intraday upswing of 71%, so, a very good first day of observation. As Stock Sumo was mentioning, we want to see GYST hold support at or above the channel between .0064-.007 on any pullbacks, and will look for an eventual break of resistance at .0125.

Viva Entertainment Group, Inc. OTTV -We tagged OTTV in  Friday’s extended watchlist and we wanted to circle back this morning to mention the solid activity that followed from this stock over subsequent sessions.

Pilgrim Petroleum Corp. PGPM – For another quick update, we’ve witnessed a pretty good two-day swing in PGPM after alerting it in Tuesday’s premarket report, and observing a low of .011. Yesterday, the stock hit .0183, which was good for a respectable overall move of 66%

We want to leave off this morning with an earnings-related options idea. We’ve had a ton of success this earnings season, and will try to keep that going with Dollar General.

Not only did the company reveal a beat on sales and profits for the quarter, but the current chart setup was already primed for a bullish move. We’ll be putting the DG Weekly $75-78 Calls on watch for potential day and/or swing trades.

First up this morning will be a review of yesterday’s options trading idea that we had for BABA as it came off of an earnings beat. The range of contracts we wanted to track were the BABA Weekly $77-81 Calls and while the stock didn’t make a big enough push to facilitate gains in all of them, we saw some nice action on the lower end. The $77-78’s each made two significant intraday swings that could have been traded upon for the following gains:

There was no need to be patient with NHMD after we tagged it for observation just prior to the opening bell in yesterday’s premarket report. We noted that the stock had seen some momentum buildup; we were looking for a carryover and found it.

The sizable intraday swing came early in the session as NHMD ran from a low of .004-.0074, an 85% pop. It enacted a bit of a dip and rip into a close at .006. We’ll leave a space on our radar screens reserved to monitor NHMD moving forward, as volatile subpenny plays like this can often be good for daily flip opportunities.

We’ve got an interesting chart setup in TAX, which as you can plainly see without the aid of annotation on the snapshot below, is currently looking egregiously oversold. Even as Liberty Tax was recently voted “Best of the Best” by Entrepreneur magazine(>>View PR) the stock has been taking a tremendous beating. 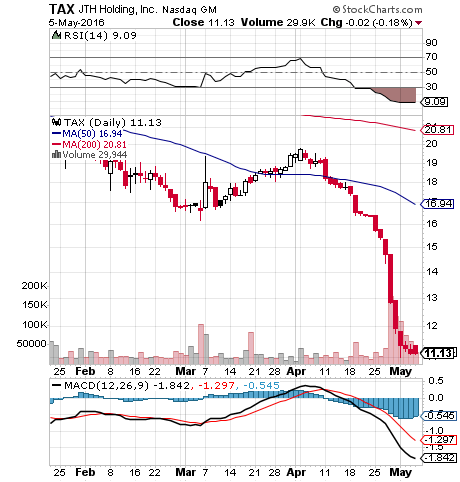 Over the past few sessions the stock seems to have been trying to find support in the low $11-range, and that is where we come in. We like to track stocks after they’ve been pounded into the pavement for possible rebound plays, as our regular readers knew very well. In the case of TAX, a return to its 50DMA at which it was trading less than a month ago, would mean gains exceeding 50% over yesterday’s closing price.