Yesterday morning, we hashed out some options ideas, among which were the LULU Weekly $340-335 Puts. The company’s year-over-year quarterly figures came back low, as is to be expected with many retailers during the pandemic.

The lackluster earnings drop provided our bearish ideas with some intraday firepower that was as follows:

On Tuesday morning, we signaled BASA for observation, keeping it on yesterday’s extended watchlist as well. Over those couple of sessions, the stock has made a very nice move from Tuesday’s low of .6147 to yesterday;s high of 1.12.

That works out to an intraweek wing of 82% and we will continue to keep an eye on this runner for the possibility of further advances.

Each of the following plays exhibited appreciable upswings on Friday afternoon after having appeared in our reports for the day and days prior. We’ll have each of these stocks on watch for the possibility of continued momentum this morning:

NHMD covered the most ground as it traded in a range from .0019-.0035 on Friday, running 84% intraday and closing at the high of day on volume to the tune of well over five times its 3-month average. We’ll certainly have an eye out for further activity as we open things up on this holiday-shortened trading week.

We latched onto GTHP early last week and would see a nice little two-day run from the stock to finish it out. Our observed low came on Thursday at .0102, which gave way to a subsequent high of .015 on Friday, marking an overnight increase of 47%

SRCO was a steady climber on Friday which traversed its way from .0025 to .0031 over the course of the day, which represents a modest yet notable 24% rise. It too qualifies for sustained monitoring as a possible momentum play, having closed at its high mark for the session.

We want to put PGEI on our radars this morning as well, not only for the momentous session it had on Friday, but also due to the content of the PR released by the company early this morning.

Following up from a release they put out in January, the company announced the completion of a joint venture agreement that puts them on track to develop a 300-acre property of proposed farmland in Baja California, Mexico in time for this year’s growing season. We’ll be interested to follow along for further updates on that project as well as watch the chart for short-term opportunities.

On Friday the markets enjoyed the biggest single-session rally since 2009. With oil rebounding as well, and the S&P having demonstrated a definitive reversal over the past couple of sessions, we’ll want to start the week off  monitoring some SPY Options. Our target area is going to be the SPY Weekly $188-191 Calls.

We zeroed in on FXCM last Thursday morning and witnessed a big 41% run from 2.49-3.51. Following a pullback off of that high, the stock came down to rebound off of the 2.64-level on Friday, where we witnessed another 17% spike.

To start off the week FXCM continued to bounce yesterday, pulling back to 2.28, just below our initial alert price, and running back to 2.69, for an added gain of 18%

We’ll be on the lookout for any further opportunities provided by FXCM in the event that it continues to register ample swing-action such as what we’ve seen over the past few sessions.

LAS is hitting our scanner this morning as a potential bottom-bouncer. The stock has come down to rebound off of the

Last week, it was announced that the CEO and Chairman would be purchasing upwards of $1M worth of LAS stock on the open market inside of the next month, a good indicator of the executives’ long term outlook for the company.

We could be discovering this play at an opportune moment, coupling the recent PR with the stock’s current positioning on chart; we will make it a definite point of focus for us in coming sessions.

BEIJING, Jan. 22, 2015 /PRNewswire/ — Lentuo International Inc. (LAS) (“Lentuo” or “the Company”), a leading non-state-owned automobile retailer headquartered in Beijing, today announced that members of its senior management team…will use their personal funds to purchase the Company’s American Depositary Shares on the open market for an aggregate amount up to a maximum of US$1.0 million >>FULL PR

We want to tag AKS this morning as another stock that is coming up off of a recently realized 52-week low. We’ve had plenty of good fortune come to us by way of this type of play in recent weeks, so we’ll want to devote a good bit of our attention to this stock as we head into mid-week.

The stock has traded as high as $10 as recently as September, and with a number of ripening indicators on the chart as shown below, AKS could be in store for some significant gains. 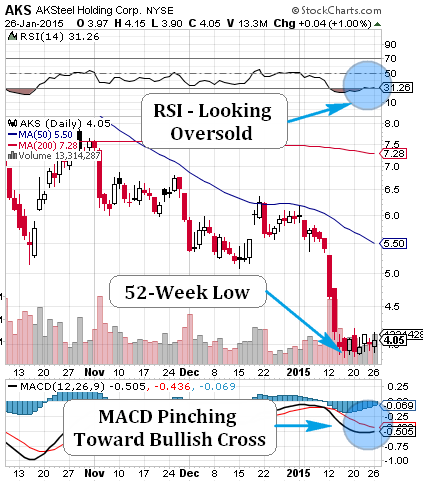