FXCM was part of the bottom-play watchlist we put together for yesterday’s premarket report, and as it turns out, we made a very timely alert on this play.

The stock did in fact begin the rebound for which we were on the lookout, trading in a daily range from 8.16 to 9.64. It represented a modest, yet notable intraday increase of 18% on more than three times its 3-month average volume. We’re going to continue monitoring FXCM for signs of a protracted resurgence.

Speaking of stocks trading at or near recent relative lows, we have another candidate to put on our watchlist for closer monitoring this morning. ESTE has been establishing a pattern of violent swings on the chart over the past several weeks, and recently fell off of a cliff from nearly $16 back at the end of May, to the $12-range this week.

The stock received another gut-punch yesterday as it gapped down considerably on news of an approximately $45M public offering of ESTE common stock at a price of 10.50/share (>>VIEW PR). The revelation wasn’t received well and ESTE tumbled further, to a new 52-week low.

That’s where we come in; we’re going to be keeping a close eye on ESTE in the sessions to come, not only because it is approaching heavily oversold territory on the strength index, but also due to the track record it’s built up for violent and rapid swings to the upside. We’ll be interested to track its activity into next week for the possibility of a bottom-bounce.

We also wanted to circle back around to LC this morning, a play we alerted off of its bottom on May 23rd and followed to respectable gains over the following few sessions.

After a consolidation that brought it back down close to our original alert price, the stock has strung together a few bullish sessions, and is now on the cusp of breaking past a point of previous resistance. If the stock can break through the channel between 5.07 and 5.42 (highlighted in blue), it will have a chance at filling the considerable gap on the chart. 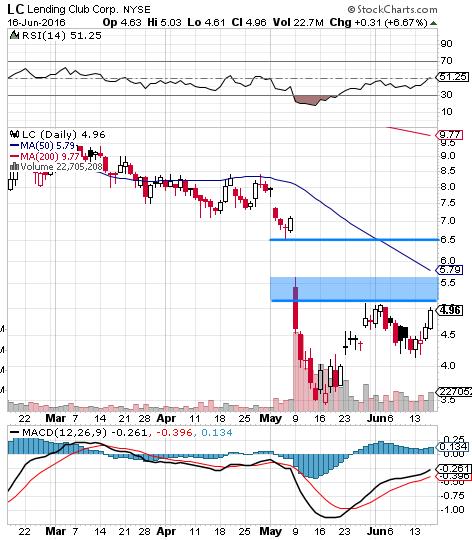 For the third day in a row we’re bringing our readers up to speed on new highs for ONOV, a stock we’ve been tracking since  April from a low of .006, which has been continuing to break out like crazy this week.

We said in was in blue-sky territory in yesterday morning’s premarket report, and it did indeed continue to soar into the atmosphere. From an early low-of-day at .11 it got a boost all the way up to its new high of .15. It went down in the books as a 36% intraday pop, and a megalithic move of 2400% over our witnessed low from earlier this spring!

Cheers go out to any of our readers who were able to carve out a slice of the ONOV pie, it’s been quite a ride thus far!

As most of our audience is surely aware by now, we love a good bottom-bounceplay opportunity, and in the past, catching stocks that have taken recent beating at just the right moment has served us quite well. We’ve got a couple of potentials in that arena this morning that we’ll want to have an eye on over the next few sessions.

Infinity Pharmaceuticals, Inc. INFI – This is a classic case of negative hype and unfavorable news simultaneously converging to form a perfect storm of stock bashing. Just look at the massive gap on the chart, even a partial re-filling of which would produce sizable gain opportunities. The enormous selloff which occurred led to new lows, but INFI gave something of a bounce signal during yesterday’s session, so we’ll be quite interested to see how the activity unfolds from this juncture. 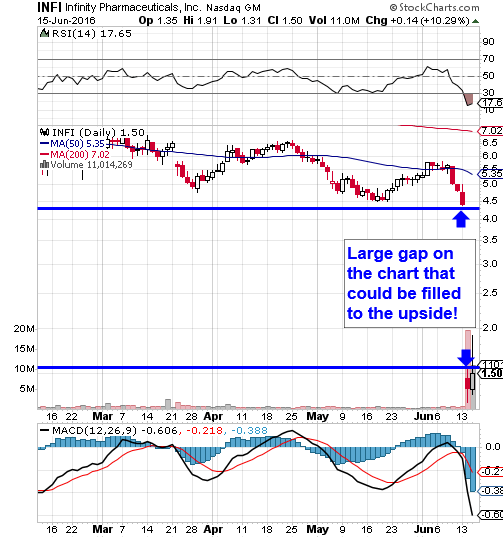 FXCM, Inc. FXCM – Also giving off a strong bottom signal is FXCM, a stock we rode to multi-bag gains back in December. We want to come back and give some attention to this play as it has come down to find support near its 6-month lows, and appears ready for a possible rebound. We’ll want to be watching for when that occurs.

Despite the traditional holiday tax-loss selling season and generally subdued atmosphere that inherently goes along with it, we’ve managed to round up a fair queue of winning selections. We’ve touched on options plays, ETNs, and stocks; surprisingly it is the stocks that are making moves during this short trading week. Take a look at the plays we’ve been tracking and the kinds of moves they’ve made for us.

As we were mentioning in yesterday’s premarket report, we began following FXCM two weeks ago and subsequent to that, would witness a low of 6.68 in the stock. Even after showing us a 196% pop, it wasn’t finished yet.

Yesterday the stock made an appreciable intraday move from 16.80 to 20.36, which represents a 21% jump; quite impressive for a stock in such a price range.

We placed SFYW on watch a week ago today, and it too has made some notable leaps during that time. From the low we observed on the day we began to track it (.065), it has managed to soar 82% to a high of .118 during yesterday’s session.

We’ll remain interested for as long as the stock continues to establish higher base levels of support moving forward.

HCTI made an appearance in yesterday’s premarket extended watchlist and anyone who was paying attention had a chance to bank a nice profit on the day.

From a low of .0015 the stock rushed to a daily high of .0021, which works out to an intraday spike of 40% It also closed at the high-of-day, and whenever we see that, we’ll always reserve a space on our watchlist the following day for the possibility of what we refer to as momentum carryover.

SBFM was the other play from our extended watchlist yesterday that ended up turning some heads in the early part of the day. From morning lows of .008, the stock cracked into Pennyland, reaching a high of .0183 by lunchtime. That registered as a 129% intraday swing so congrats to anyone who was in on the action!