We took notice of ECYT yesterday morning during our routine premarket scan, and due to some abnormal activity, we decided to include it in the daily watchlist.

It turned out to be a splendid idea, with the stock ultimately recording a hugely bullish session. ECYT traded from its low of 1.63 just following the open, to its high of 3.75 just prior to the close. It worked out to a single-session rip of 130% and it came on over 180X the monthly average volume. The stock has also hit a new high of 6.07 in the premarket this morning, pushing our observed move in less than 24 hours to a whopping 272% 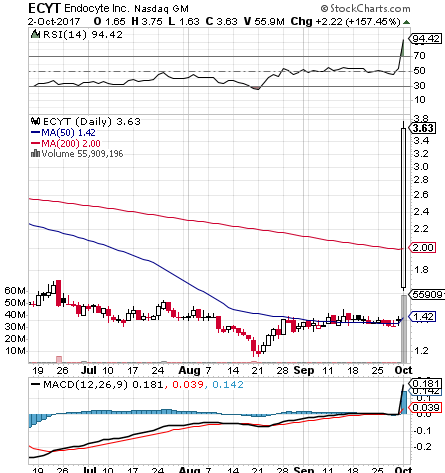 It was especially impressive because of the timing, which couldn’t have been any better. Prior to yesterday’s session the stock was stagnating for several months. The move was catalyzed primarily by the announcement of the completion of a worldwide license on the company’s prostate cancer treatment, which will be moving on to Phase III development. (>>View PR)

Speaking of solidly-timed calls on pharma plays, we also caught RIGL and included it in yesterday’s premarket report. It didn’t see the type of move that the previously mentioned stock, but got off to a respectable start.

RIGL traded in a range from 2.85-3.42, a modest rise of 20%, but did so on nearly 17X the monthly average volume, and closed near its high of day. We’ll continue to observe this play to see if it can establish a sustained uptrend.

We were just updating our readers yesterday morning on the moves CAPR had made since we had alerted it onSeptember 20th from its low of 1.80.

What followed was another nice session for the stock, which ran to a new high of 4.25; a total increase of 136% in a span of just eight trading days.

We also want to quickly update readers on our TIF options ideas that we submitted on the morning of September 28th, the TIF 10/20 $92-93 Calls. The stock has been in a continuous bullish pattern since then, and those calls made some pretty nice gains in the process.

It isn’t just bullish activity that draws us to a stock. Any type of increase in volatility generally causes us to take note, and the rapid fashion in which VSAR is crashing this morning is about as volatile as it gets. The company failed to meet primary endpoints on its HGH study, and the stock fell through the floor, losing over 80% of its value thus far.

Regardless of the catalyst, whenever such a huge selloff occurs in such a hurried way, we go into bottom-watch mode, and wait for the eventual bounce. So we’ll have VSAR on our radars moving forward, watching for signs of solid support and subsequent rebound.

The announcement of an enormous 10% share reduction via buyback program had exactly the effect we suspected it would yesterday, after we signaled a range of calls to observe in our premarket report.

Those targets were the APC 09/29 $47-48.50 Calls and each of them made a move to the upside. We also mentioned we’d be watching them beyond yesterday’s session, and sure enough the stock appears to want to gap up this morning and add to the gains we’ve already witnessed, which were as follows:

*We never discuss weekly options on a Friday without going out of our way to warn our readers that trading contracts with a weekly expiration on a Friday is exceedingly risky and should only ever be attempted by expert traders!!!