To kick off this brand new trading week, we are interested in tracking a range of calls in the BABA chain, after shares dipped on the news that co-Founder Jack Ma will be stepping down and handing full control over to the CEO effect next year.

The reactionary selloff may provide us with some solid options trading chances, so we are going to keep an eye on the BABA 10/12 $165 & 167.50 Calls in the days and weeks ahead.

Shares of OPK took a bath on Friday, briefly falling below the stock’s 200DMA, and closing well in the red on the day. We’re going to signal our interest in tracking OPK as a bottom-watch play.

The stock is approaching extremely oversold territory, and in the midst of its downturn we observed some Form-4 submissions, with insiders buying up shares on Friday as the bottom fell out.

That suggests a confidence that it may not have much further to fall, so we will want to hang around as OPK searches for a bottom and solid rebound point. 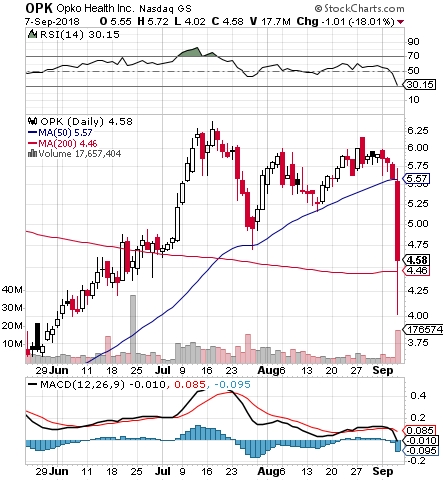 Our first order of business this morning is to review the recent performance of ECYT, which we initially slated for observation in our report on February 28th. At the time, the stock had been slowly gaining momentum for much of February, and it looked ripe for a more pronounced breakout.

That day, as the stock was trading for as little as 4.51, we witnessed an explosion in volume that has precipitated a very impressive run, persisting for over two weeks up to the present time. Yesterday’s session brought a new high of 11.54 in ECYT, which marks an upswing of 156% in a relatively short time frame.

On Monday morning, we came up with some options ideas for VRX, which we noted was “ready for a bottom bounce”. We also made reference to a huge Form-4 buy of $108.8M came in as well, which led us to postulate that “for now the stock has gone as low as it’s going to go.”

We had some longer-term ideas as well which we will likely come back to in an upcoming report, as it appears VRX will continue to head up. On that note, we’ll also look to roll up our strike prices on the weekly calls to the $16 & $16.50’s.

Yesterday we noted that TJX was exhibiting some interesting premarket activity despite missing EPS estimates on its Q4 earnings call. We also mentioned that we’d look for the very common dip-and-rip scenario, which occurred on cue.

Our options targets were the TJX 03/16 $80-85 Calls, and unsurprisingly, we got considerable gain opportunities out of all three sets of contracts in that range:

Yesterday morning, we took the initiative to tag ECYT in our premarket report for the first time since November. The stock had already been steadily rising for a few weeks despite the reporting of Q4 losses, and the company revealed the pricing of a public offering at 4.20/share.

That helped to bring the biggest single session upswing for the stock since October, with ECYT running from a low of 4.51 up to 6.08. It was good for a highly respectable 35% increase, and sufficient to have the stock claim the title of top NASDAQ gainer of the day.