CNAB was one of a pair of cannabis plays that we mentioned we’d be tracking toward the end of last week that ended up kicking this week’s trading off with great sessions. When we brought CNAB up in our premarket report on Thursday,

We followed up on Friday after the stock had made a 43% run from .28-.40, and asserted that we’d be on the lookout for CNAB as well as other plays in the pot sector to see increased activity in the weeks ahead. November is fast approaching, with several key cannabis initiatives coming up for a vote, including a recreational bill in California.

Our overall interest in the space has been ongoing from the fall of 2014, just prior to the first “Green Rush”, a historic period which saw countless stocks in the sector make exponential gains. With activity for many of these stocks picking up once again, we’ll be certain to watch plays like GRNH, ERBB, PHOT, TRTC, PZOO, and BLOZF more closely.

The other cannabis related stock that we’ve been hot on the trail of since Thursday is OWCP, and the stock has been pushing the envelope ever since.

Yesterday we were just mentioning the excellent gains it had already made from .0045 to .0111, and that we were anxious to see it continue its momentum, and it followed up with another great performance. From its daily low of .0109 OWCP went on to hit a new high of .0193, representing a daily rip of 77%, and a three-session overall increase of 329% over Thursday’s .0045 low.

Congratulations to any of our readers who caught a piece of the excellent action on OWCP. With the progress it’s already made, we’ll definitely be reserving a continued slot on our radar screens for this stock in sessions ahead.

We also want to take a minute to point out a good catch we had in NVFY yesterday, which traded monster volume to the tune of roughly 20X the monthly average, and recorded a solid intraday push.

The stock traded in a range from 3.81-5.15, for a gain of 35% and held a good deal of that advance into the close at 5.08. We’ll continue to track this play and look for it to record another session of higher highs and higher lows, as it has done for the past six days straight.

We want to start things off this morning by going over the huge gains that were made possible by the AAPL options idea we formulated this week. Yesterday we reminded our readers of our intent to stay hot on the trail of the AAPL Weekly $114-116 Calls as the stock was soaring in the premarket off of its Q2 earnings-beat.

It wouldn’t have mattered which strike price traders chose within our target range, because each set recorded a heck of an intraday run:

Congratulations are in order for any of our followers who were able to pare some impressive profits out of those excellent intraday performances.

EQLB is a play that we want to reiterate our interest in this morning. Our regular readers might recall that we caught this play exactly six weeks ago on the heels of an announced partnership with world-famous music producer, Timbaland.

There hadn’t been any word of the development of the Timbaland partnership since the initial PR, until yesterday when we noticed a potentially telling Instagram post by the company. They posted the following message along with a photo of Timbaland: 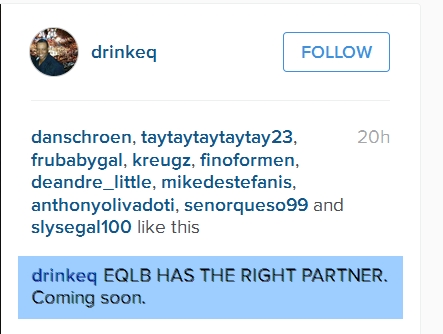 We’ll keep a close watch for any official updates that may be forthcoming pertaining to that story-line. We also like the look of the present chart conditions: 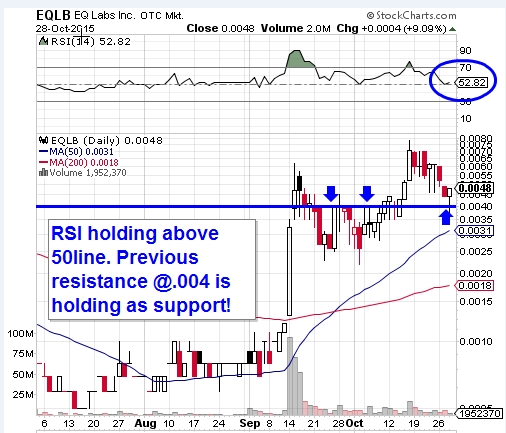 We also want to pass along the PR update that came down the line from PZOO this morning. We’ve closely followed the company’s ongoing expansion into the cannabis testing space, and  today’s announcement regarding a new partnership adds another link to the chain:

We come back to touch base with PZOO this morning as the company has released an update on its marijuana testing facility in Las Vegas. It’s significant in that PZOO has secured a loan for the capital to put the finishing touches on the laboratory, the terms of which state that the full amount will be paid from the proceeds of the lab itself.

The company also made some lofty claims, namely that it has such an impressive roster of clients-in-waiting, that when the labs do open, they will be in a position to break even in the first month of operation! We’re being told that this cash infusion will have things on track for a November grand opening, so we’re going to begin to monitor PZOO more heavily in the weeks ahead as more updates are sure to be forthcoming.

We also want to point out the current setup on the PZOO chart on the annotated snapshot below: 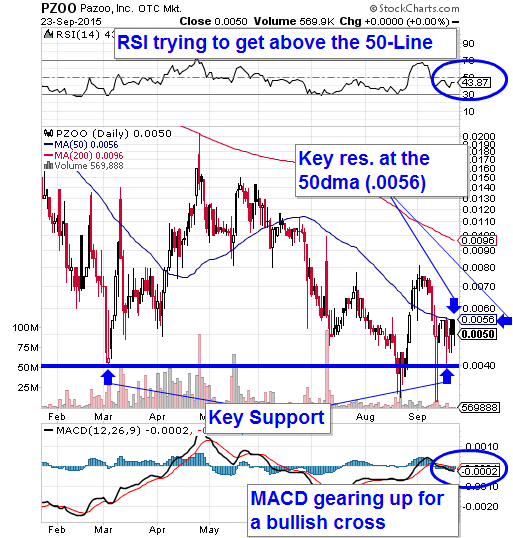 WHIPPANY, N.J., Sept. 24, 2015 /PRNewswire/ — Pazoo, Inc. (OTC: PZOO) is pleased to report that Pazoo has received a $200,000 Loan to be paid back from the revenue and earnings of the Las Vegas Facility.  There can be no debt to equity conversion as this is a more conventional form of financing.

The Note holder was so impressed by the Las Vegas Lab, and more so by the amount of growers that have committed to exclusively test with Pazoo, Inc subsidiary MA & Associates, LLC, that he was comfortable to be paid back from the revenue and earnings that will be generated from the Lab.  In fact, based on the commitments from growers, Pazoo management is confident that the lab will be at least break even within the first 30 days of operation, and will quickly transition to profitability.

Pazoo expects to have the Colorado testing facility to officially be under the control of Harris Lee Colorado, LLC on or about October 14 and have the Las Vegas Facility operational and testing product in the latter part of the 4th quarter.

David Cunic, CEO, states, “The moment is finally upon us. This is going to be an watershed 4th quarter for Pazoo and hoping for an explosive 1st quarter of 2016. We are very excited for the ownership transition in Colorado.  We have several growers in Colorado that are just waiting for Harris Lee Colorado, LLC to take over so they can begin testing with Harris Lee Colorado, LLC. Everyone can just feel the momentum and it has energized the team to see what’s in front of us.”  >> Full PR

We also suggest that our readers check out the official webcast the company recently published which essentially addressed every facet of the business: >>>VIEW WEBCAST