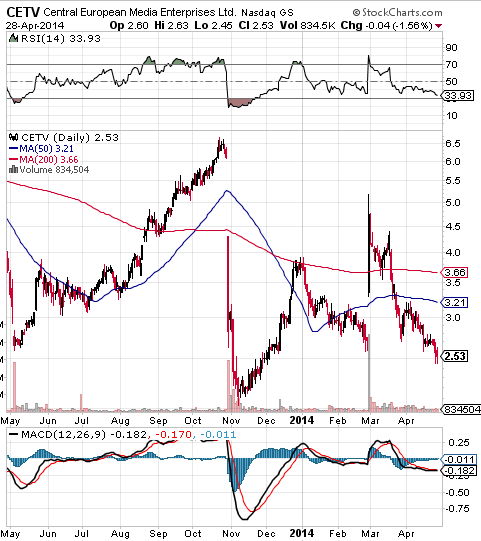 As you know, ACGX brought us an excellent chance at gains of up to 91% following our initial alert on Wednesday, (trading in a range from .0055-.0105) and the stock continued to provide opportunities as we closed out the short week on Thursday.

It traded with increased volatility compared to the previous session, but the chances to profit for the quick-witted trader were present. The chart below shows how one could have taken advantage of the swings and flipped ACGX for cumulative gains adding up to 59% 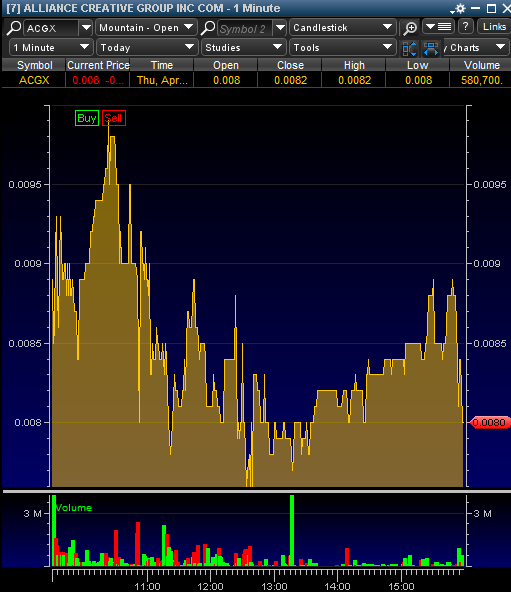 We pointed out on Thursday that we wanted to see support hold above .0069, and that’s still true as we kick off a new week. We also want to focus on a PR released by Alliance just a few minutes ago:

The 2014 First Quarter numbers, ending March 31, 2014, represent an increase of about 30% in revenue and an increase of more than 150% in Net Income compared to the first quarter of 2013. The full financial statement, balance sheet, cash flow statement, stockholder equity and information and disclosure statements will be completed and posted on the OTC Market Company website at www.OTCmarkets.com under the stock symbol ACGX under the section for filings and disclosure around the 2nd week of May, 2014. >> FULL PR

While our coverage of the cannabis sector spans back to 2012, and covers a vast range of stocks, AVOP is one marijuana play that we only just recently added to our ongoing watchlist.

After it popped up on a routine scan for interesting news, we tagged it in our report dated  Tuesday, April 8th, and were duly rewarded for our efforts as we witnessed a subsequent run from  .0006 to .0018 (+200%).

The relaxation of the cannabis sector is undeniable, but stocks like AVOP have shown us that the opportunities are still out there.

Our first order of business as we wrap up this short trading week is to congratulate everyone who caught our special alert of ACGX yesterday! An enormous pat on the back is due for folks who caught it at its daily low of .0055, because it wasn’t long before it embarked on a huge run that lasted all day, as the stock took on a life of its own.

Not only did ACGX very nearly crack into the top ten on the OTC Markets most-traded list (11th Most Active), but it surged into Pennyland, breaking out to a high of .0105 on the day; that was good for an intraday move of 91%

Adding to the excitement was the fact that this occurred on well over 5x the 3-month average volume. In fact, it was the second-highest trading volume in the history of the stock, so we are calling our coverage of this play yesterday a rousing success.

It’s easy to get lost in the short-term brilliance of this stock, but remember, we’re interested in ACGX on a longer-term basis as well. If you didn’t catch yesterday’s report, and missed out on the big gains, we don’t think it will be your last chance. This is a steady-growth, revenue producing outfit that we feel has an extremely bright future. If you didn’t read yesterday’s ACGX Report, please do so now; it will be a good place to start your due diligence on this gem.

That being said, The near-term fireworks may not yet be over. The amount of momentum flowing through ACGX yesterday was awe-inspiring, and the stock held the majority of its stellar gain overnight. Caution should be exercised in situations like these, but an accurate play on the trends from this point forward could still make for notable profit-taking opportunities.

Rest assured that we will keep everyone abreast of further happenings with ACGX, and again, cheers to anyone who was already able to pad their pockets by way of our perfectly-timed alert!

It also enabled us to claim the top spot on yesterday’s Penny Stock Rumble: 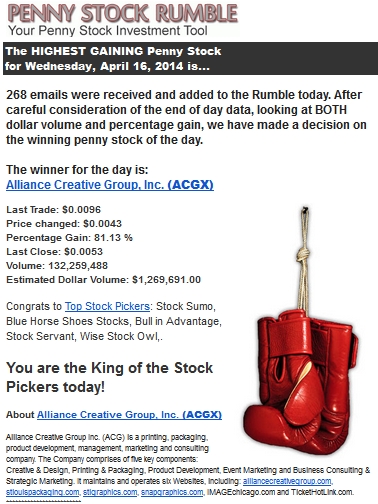 ACGX is still receiving an 100% Overall “Buy Rating” over at BARCHART.COM

With ACGX requiring our undivided attention yesterday, we were unable to include updates for our members on the impressive performances of some of our other recent interests, so let’s look at those now:

Appearing as a feature in Tuesday’s report, WAVX really made waves as it came out of the gate, touching 1.18 in the early morning, before taking off on a run that would propel the stock as high as 1.97.

Total gains of up to 67% were possible with WAVX in what was an extremely liquid session; WAVX traded 22.48M shares on the day Tuesday, an all-time record.

Tracking back just a bit further, we find AVOP, which last appeared in Friday’s newsletter. We were patting ourselves on the back for calling attention to the stock the previous Tuesday, which had allowed us to see a 200% run from .0006 to .0018.

AVOP would come down to find support in the .001-.0013 range, where it traded in a tight channel leading up to yesterday’s session. Another run ensued, and we saw a new high of .0023. That means we saw an overall move of 283% from AVOP in just over a week! Gains of up to 91% were possible during yesterday’s session alone; we salute anyone who was able to take advantage! 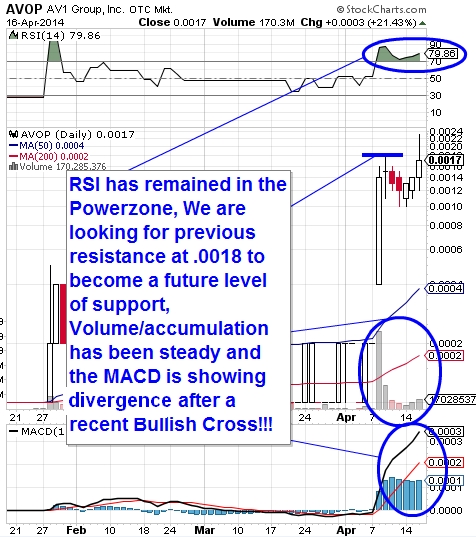 When we brought this pot play to the table last week, it was in the midst of a general pullback throughout the cannabis sector. AVOP did buck the trend, although we are seeing a bounceback for many of the other marijuana-related stocks that we’ve been tracking.

A big development in the sector came a few days back, when Walmart announced that it would begin selling marijuana in Colorado (and Washington, when legal sales begin there this summer). Review the article here.