Our first order of business this morning is to swing back around for a stock that we signaled our interest in back in May, which has subsequently gone on to put together a fantastic run up the chart.

When we tagged CGI on May 9th, the stock had recently fallen off of a cliff, and was attempting to recover off of its newly established lows. We observed a low PPS of 1.90 just a couple of sessions later, and that preceded one heck of a recovery. Yesterday, CGI streaked to new highs, coming up as the #4 top gainer on the NASDAQ, and reaching 5.15. That works out to a total increase of 171%

Having now recovered all of the ground it lost in early May, the chart still appears strong, and the next key resistance point we’ll look to see CGI make a run at is the current 200DMA of 5.95.

Options Ideas
We mentioned in the previous report that there would be a growing number of possible options trading opportunities as we neared the end of the week. This morning we’re looking at Facebook, Inc. FB, which reported yesterday post-market, and Anheuser-Busch InBev SA/NV (BUD), reporting this morning.

We also want to quickly recap the solid performance of IFON, which we tagged yesterday morning as a possible bottom bounce play, after seeing it test it 50 and 200DMA’s the previous day. The stock responded with another nice move from  .562 to .84, an intraday push of 49% on big time volume.

We’ll look for the establishment of higher lows and higher highs and for the stock to maintain its multi-day runner status, and for a break of resistance in the channel between yesterday’s swing high and a swing high back in April at 1.04. 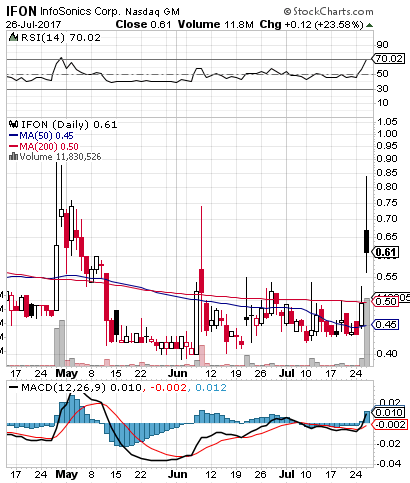 Last week, we touched upon the fact that the February comments from the White House pertaining to stricter enforcement of federal recreational marijuana laws appear to have walked back by Jeff Sessions. That led us to reassert our interest in closely tracking pot stocks. as the cannabis industry’s feet have been pulled from the fire, so to speak.

On Friday, we tagged POTN for the first time after noticing some recent increases in volume and price action, and it was a solid idea for the day. POTN traded in a range from .038 to .055, for chances at intraday gains of up to 45% on volume of roughly three times the monthly average. It led to a strong close, just a tick under a nickel at .049. We’ll definitely want to continue to monitor this play as we kick off a new trading week.

After noticing it in a bearish pattern, then getting word of an analyst downgrade, we went with a bearish options idea for SNAP on Friday, and it worked out quite nicely for us. We had signaled the SNAP Weekly $20 Puts for possible quick-strike trade opportunities, and it was there for the taking.

Those contracts traded up from a low of .30, and reached 1.04, an intraday move amounting to 246% Cheers to anyone who was able to use that move to their advantage!

Both of the above-mentioned plays appeared in our reports for the first time ever on Friday, and continuing along that track, we’re going to highlight another stock this morning that we haven’t covered before.

EVEP has the look of a bottom-bouncer as you can see from the following chart snapshot. We’re going to put this one on our watchlist as a potential extended rebounder, with the RSI about to crack above the 50-line and the MACD just having underwent a bullish cross. 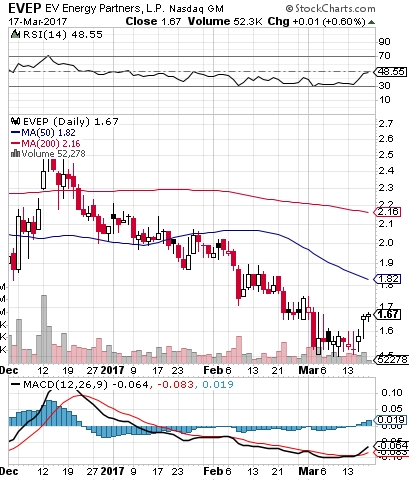