We’ve done our best this week in reminding readers that our interest in AYTU was not a drill. Beginning from our initial alert in last Wednesday’s premarket report, the stock was exhibiting all the signs of a recovery play.

Yesterday we reiterated our interest for the second time this week, mentioning how the stock had already come a considerable distance from our observed  low of .4118, and that it had picked up momentum on Monday, and that more gains could be in store.

We were right on the money as the stock extended its recent gains yesterday running to a new high of .76, which represents a five day swing of 85%

Recently, we have had quite a few plays we’ve signaled within the past couple of months, exhibit really convincing, sustained uptrends, and ENPH is another one to put in that category.

While our most recent mention of the stock came on March 19th, in the midst of the current run as a reminder, our initial call came on February 28th.  On that day, the stock saw a low of 3.07 and hasn’t looked back since.

Yesterday, ENPH surged to a new high of 5.58, marking a respectable one month run of 82% during which time volume has also been greatly increased. 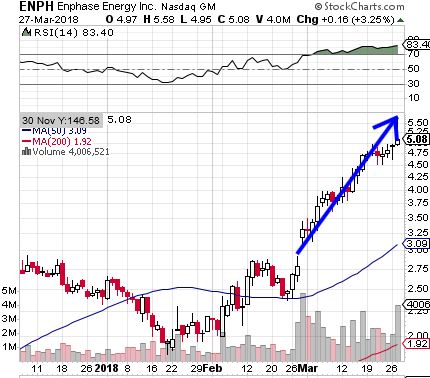 Fresh Options Ideas – Both of the following are looking good today with untraded-upon earnings beats, so we’ve got a pair of fresh ideas to share this morning:

We most recently mentioned NXTD a couple of weeks ago on February 12th, following a long period of consolidation off of the massive run we observed back in December. The stock seemed to be settling down at a bottom, and indeed, it reached its low of 2.00 the very next day.

After a bit of sideways trading NXTD has awakened in a big way on the heels of a key development coming over the newswires (see snippet below). Already in the premarket, it has risen by 100% since our alert, hitting 4.00 in early trading.

We initially flagged RXMD in Thursday’s premarket report after noticing the amount of momentum that had been building up in the stock recently. It managed to finish out the week sustaining that momentum and continuing to head into blue skies, setting a new 52-week high with each uptick.